Add an Event
Newswire
Calendar
Features
Home
Donate
From the Open-Publishing Calendar
From the Open-Publishing Newswire
Indybay Feature
Related Categories: U.S. | Government & Elections | Health, Housing & Public Services | Police State & Prisons | Womyn
SCOTUS Overturns Roe v Wade: The Dissent of Justices Breyer, Sotomayor, and Kagan
by Dave Id
Friday Jun 24th, 2022 6:00 PM
Justices Stephen Breyer, Sonia Sotomayor, and Elena Kagan: "Today, the Court discards that balance. It says that from the very moment of fertilization, a woman has no rights to speak of. A State can force her to bring a pregnancy to term, even at the steepest personal and familial costs." 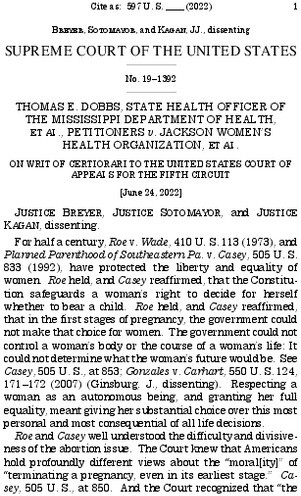 
"Whatever the exact scope of the coming laws, one result of today’s decision is certain: the curtailment of women’s rights, and of their status as free and equal citizens. Yesterday, the Constitution guaranteed that a woman confronted with an unplanned pregnancy could (within reasonable limits) make her own decision about whether to bear a child, with all the life-transforming consequences that act involves. And in thus safeguarding each woman’s reproductive freedom, the Constitution also protected “[t]he ability of women to participate equally in [this Nation’s] economic and social life.” Casey, 505 U. S., at 856. But no longer. As of today, this Court holds, a State can always force a woman to give birth, prohibiting even the earliest abortions. A State can thus transform what, when freely undertaken, is a wonder into what, when forced, may be a nightmare. Some women, especially women of means, will find ways around the State’s assertion of power. Others—those without money or childcare or the ability to take time off from work—will not be so fortunate."

"The lone rationale for what the majority does today is that the right to elect an abortion is not 'deeply rooted in history': Not until Roe, the majority argues, did people think abortion fell within the Constitution’s guarantee of liberty. Ante, at 32. The same could be said, though, of most of the rights the majority claims it is not tampering with. The majority could write just as long an opinion showing, for example, that until the mid-20th century, 'there was no support in American law for a constitutional right to obtain [contraceptives].' Ante, at 15. So one of two things must be true. Either the majority does not really believe in its own reasoning. Or if it does, all rights that have no history stretching back to the mid19th century are insecure. Either the mass of the majority’s opinion is hypocrisy, or additional constitutional rights are under threat. It is one or the other."

"The majority makes this change based on a single question: Did the reproductive right recognized in Roe and Casey exist in '1868, the year when the Fourteenth Amendment was ratified'? Ante, at 23. The majority says (and with this much we agree) that the answer to this question is no: In 1868, there was no nationwide right to end a pregnancy, and no thought that the Fourteenth Amendment provided one. Of course, the majority opinion refers as well to some later and earlier history. On the one side of 1868, it goes back as far as the 13th (the 13th!) century. See ante, at 17. But that turns out to be wheel-spinning. First, it is not clear what relevance such early history should have, even to the majority. See New York State Rifle & Pistol Assn., Inc. v. Bruen, 597 U. S. ___, ___ (2022) (slip op., at 26) ('Historical evidence that long predates [ratification] may not illuminate the scope of the right'). If the early history obviously supported abortion rights, the majority would no doubt say that only the views of the Fourteenth Amendment’s ratifiers are germane. See ibid. (It is 'better not to go too far back into antiquity,' except if olden 'law survived to become our Founders’ law'). Second — and embarrassingly for the majority — early law in fact does provide some support for abortion rights. Common-law authorities did not treat abortion as a crime before 'quickening' — the point when the fetus moved in the womb.2 And early American law followed the common-law rule.3 So the criminal law of that early time might be taken as roughly consonant with Roe’s and Casey’s different treatment of early and late abortions. Better, then, to move forward in time. On the other side of 1868, the majority occasionally notes that many States barred abortion up to the time of Roe. See ante, at 24, 36. That is convenient for the majority, but it is window dressing. As the same majority (plus one) just informed us, 'post-ratification adoption or acceptance of laws that are inconsistent with the original meaning of the constitutional text obviously cannot overcome or alter that text.' New York State Rifle & Pistol Assn., Inc., 597 U. S., at ___–___ (slip op., at 27–28). Had the pre-Roe liberalization of abortion laws occurred more quickly and more widely in the 20th century, the majority would say (once again) that only the ratifiers’ views are germane."

"The majority’s core legal postulate, then, is that we in the 21st century must read the Fourteenth Amendment just as its ratifiers did. And that is indeed what the majority emphasizes over and over again. See ante, at 47 ('[T]he most important historical fact [is] how the States regulated abortion when the Fourteenth Amendment was adopted'); see also ante, at 5, 16, and n. 24, 23, 25, 28. If the ratifiers did not understand something as central to freedom, then neither can we. Or said more particularly: If those people did not understand reproductive rights as part of the guarantee of liberty conferred in the Fourteenth Amendment, then those rights do not exist. As an initial matter, note a mistake in the just preceding sentence. We referred there to the 'people' who ratified the Fourteenth Amendment: What rights did those 'people' have in their heads at the time? But, of course, 'people' did not ratify the Fourteenth Amendment. Men did. So it is perhaps not so surprising that the ratifiers were not perfectly attuned to the importance of reproductive rights for women’s liberty, or for their capacity to participate as equal members of our Nation. Indeed, the ratifiers — both in 1868 and when the original Constitution was approved in 1788 — did not understand women as full members of the community embraced by the phrase 'We the People.' In 1868, the first wave of American feminists were explicitly told — of course by men — that it was not their time to seek constitutional protections. (Women would not get even the vote for another half-century.) To be sure, most women in 1868 also had a foreshortened view of their rights: If most men could not then imagine giving women control over their bodies, most women could not imagine having that kind of autonomy. But that takes away nothing from the core point. Those responsible for the original Constitution, including the Fourteenth Amendment, did not perceive women as equals, and did not recognize women’s rights. When the majority says that we must read our foundational charter as viewed at the time of ratification (except that we may also check it against the Dark Ages), it consigns women to second-class citizenship."

"Now a new and bare majority of this Court — acting at practically the first moment possible — overrules Roe and Casey. It converts a series of dissenting opinions expressing antipathy toward Roe and Casey into a decision greenlighting even total abortion bans. It eliminates a 50-year-old constitutional right that safeguards women’s freedom and equal station. It breaches a core rule-of-law principle, designed to promote constancy in the law. In doing all of that, it places in jeopardy other rights, from contraception to same-sex intimacy and marriage. And finally, it undermines the Court’s legitimacy."

"With sorrow — for this Court, but more, for the many millions of American women who have today lost a fundamental constitutional protection — we dissent."

You can read Samuel Alito's and Clarence Thomas' disingenuous theocratic bullshit at the website of the US Supreme Court. Clarence Thomas makes clear in his concurrence that he has a shopping list of cases he's eager to overturn, so contraception and gay marriage can be outlawed again, even bringing back sodomy laws. But, he wrongly thinks he's immune from the worst of white supremacist and Christian fundamentalist terror. The fire he's recklessly stoking inevitably leads to anti-miscegenation laws and other horrors that burn men like him, too.
https://www.supremecourt.gov/opinions/21pd...
Add Your Comments
Support Independent Media
We are 100% volunteer and depend on your participation to sustain our efforts!