Add an Event
Newswire
Calendar
Features
Home
Donate
From the Open-Publishing Calendar
From the Open-Publishing Newswire
Indybay Feature
Related Categories: San Francisco | Environment & Forest Defense | Health, Housing & Public Services | Labor & Workers
Stop Poisoning & Killing Us For Profits! Hunters Point Community Residents Speak Out
by Labor Video Project
Sunday Jun 5th, 2022 10:03 AM
A rally and speak-out was held to support a San Francisco Grand Jury report that said rising bay waters would expose the toxins and radioactive material at Hunters Point to residents and the community. It also attacked the failure of City, State and Federal agencies to do proper oversight of the Lennar condo development and protect the residents. Hunters Point residents and advocates spoke out. Many said this deadly situation was continuing because of profiteering by developers, government agencies and city, state and federal politicians.

original image (4030x1864)
Hunters Point residents and community members rallied at San Francisco City Hall on June 3, 2022 to support a San Francisco's Grand Jury report that said that there had been no real oversight of the development of Hunters Point superfund sight. Over $1 billion of US government funds have already been spent to remediate the site as well as Treasure Island but as a result of fraud by Tetra Tech and Test America and retaliation against many OSHA and health and safety whistleblowers, the site continues to be contaminated. The speakers also talked about the capture of government regulatory agencies by Lennar and other developers and their collusion with politicians who have allowed this development.

The Grand Jury report said that as a result of rising bay waters there would be a threat of dangerous toxins and radioactive material being exposed and further contaminating the community and visitors to the area. This report is also applicable to the massive development of the man made Treasure Island which is in the middle of the SF bay and also threatened with rising waters. It also reported that SF DPH and other state & federal agencies had not provided oversight.

Speakers talked about the continuing health dangers and also Dr. Ahimsa Sumchai reported on the cover-up of the dangers by government agencies and city, state and national politicians. Speakers demanded that the continuing removal of earth stop and that there be real oversight of their health and safety. Dr. Sumchai also reported that UCSF managers had covered up the contamination of workers on Hunters Point at a UCSF animal facility. Workers at the site which is next to the SF Police Department training center had also been contaminated with radioactive isotopes from the radioactive site. Many workers who were contaminated from radiation and other toxins have been fighting for workers compensation. 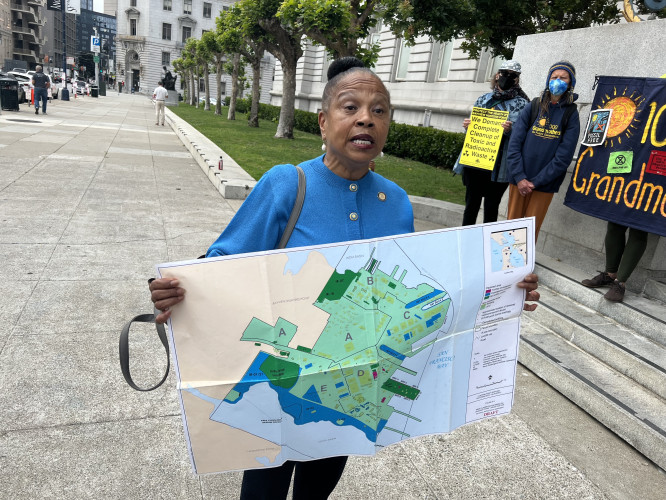 original image (4032x3024)
Dr. Ahimsa Sumchai reported on the systemic cover-up by the City of San Francisco, State and Federal agencies of the illegal development of Hunters Point on a Superfund nuclear toxic dump site. She also reported that the corruption of San Francisco officials, State and Federal officials had ignored the reports including a San Francisco Grand Jury report previously.
https://youtu.be/zez66ZLmnFU
§Spend More Money On Cleaning Up Radioactive Dump Site
by Labor Video Projectt
Sunday Jun 5th, 2022 10:03 AM 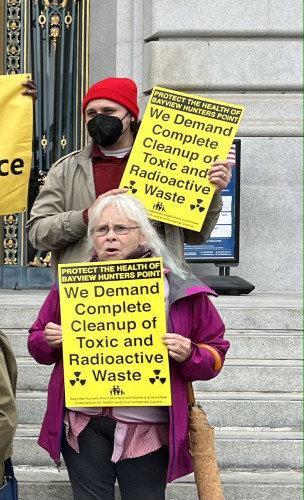 original image (781x1282)
Signs saying that the radioactive dump site should continue to be cleaned up for development by Lennar and other developers.
https://youtu.be/zez66ZLmnFU
Add Your Comments
Support Independent Media
We are 100% volunteer and depend on your participation to sustain our efforts!