Then and Now: History of the Fight for Reproductive Freedom w/ Gloria Steinem & more 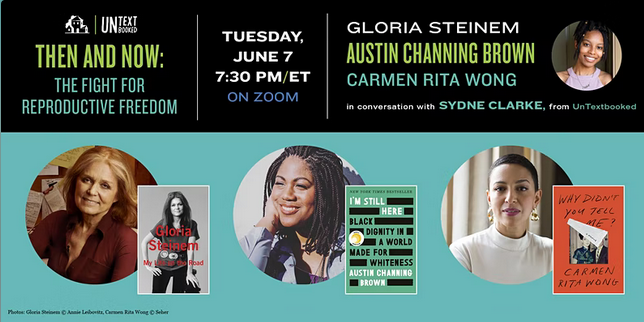 Import event into your personal calendar
Date:
Tuesday, June 07, 2022
Time:
4:30 PM - 5:30 PM
Event Type:
Panel Discussion
Organizer/Author:
UnTextbooked podcast project of Got History?
Location Details:
Online event via Zoom (FREE)
Join UnTextbooked, a podcast for the future brought to you by teen changemakers,
for a virtual, cross-generational conversation between activists and thought leaders
in the women’s rights space on the historical and current fight for reproductive freedom.

When you register for your FREE ticket, you will also have the option to purchase books from the featured panelists. Orders will be fulfilled and shipped by our independent bookstore partner, Books Are Magic. You also have the option to donate any amount you wish
to Every Mother Counts, whose mission is to make pregnancy and childbirth safe, respectful, and equitable for every mother, everywhere. You do not have to purchase a book or donate to attend the event.

As reproductive rights return to the forefront of the national conversation, we’re looking to those who came before us to share their wisdom and insights. A transfer of knowledge across generations can be our key right now to advancing understanding on differing views on the issue, helping today’s students discern their stance, and collectively strengthening our civic participation.

Featuring Gloria Steinem and moderated by writer, trailblazer, social advocate, and high school senior Sydne Clarke, this panel discussion joins together extraordinary writers and leaders of historic movements with an inquisitive, young journalist for an intergenerational discussion about reproductive rights, activism, and finding one’s own voice in the court of public opinion.

--What histories do we recall together with these seasoned voices?

--What past lessons do we help invoke to make clear the serious long-term impact
of Supreme Court rulings on their lives and the lives of their loved ones?

--And how can we make movements more inclusive?

We hope you join us for this important conversation.

Gloria Steinem is a writer, lecturer, political activist and feminist organizer. She was a founder of New York and Ms. magazines. She is the author of Moving Beyond Words, Revolution from Within, Outrageous Acts and Everyday Rebellions, published in the U.S., and in India As If Women Matter. Her writing also appears in many anthologies and textbooks. She co-founded the National Women’s Political Caucus, the Ms. Foundation for Women, the Free To Be Foundation, and the Women’s Media Center in this country. For her writing, Gloria has received the Penney-Missouri Journalism Award, the Front Page and Clarion awards, National Magazine awards, the Lifetime Achievement in Journalism Award from the Society of Professional Journalists, the Society of Writers Award from the United Nations, and the University of Missouri School of Journalism Award for Distinguished Service in Journalism. She has been awarded numerous honorary degrees, including the first Doctorate of Human Justice awarded by Simmons College, the Bill of Rights Award from the American Civil Liberties Union of Southern California, the National Gay Rights Advocates Award and the Ceres Medal from the United Nations. In 2013, President Obama awarded her the Presidential Medal of Freedom, the highest civilian honor. Rutgers University is now creating the Gloria Steinem Endowed Chair in Media, Culture and Feminist Studies. Gloria lives in New York City, and spends about half the time traveling in this and other countries.

Austin Channing Brown is a speaker, writer, and media producer providing inspired leadership on racial justice in America. She is the New York Times bestselling author of I’m Still Here: Black Dignity in a World Made for Whiteness. In 2023, Convergent will publish a young readers adaption of I’m Still Here. She is also the President and CEO of Herself Media, a company committed to women-driven storytelling. Austin earned a business management degree and a masters in social justice.

Carmen Rita Wong is a writer and nonprofit board leader whose board positions include The Moth and the Planned Parenthood Federation of America. She was the co-creator and television host of On the Money on CNBC and was a national advice columnist for Glamour, Latina, Men’s Health, and Good Housekeeping. Wong is the author of a series of novels and two bestselling advice books. She is the founder and CEO of Malecon Productions, LLC, where she develops female-focused media and entertainment. She lives in Manhattan with her daughter.

UnTextbooked is a unique youth media company that has created a new way to generate and distribute historical content and thinking to and by young people. The UnTextbooked podcast consists of teen-led interviews with leading historians and leaders of applied history. Each episode models engaging with the past in a way that is non-partisan and inspires critical thinking and intergenerational dialog.
Added to the calendar on Sat, Jun 4, 2022 7:52PM
Add Your Comments
Support Independent Media
We are 100% volunteer and depend on your participation to sustain our efforts!