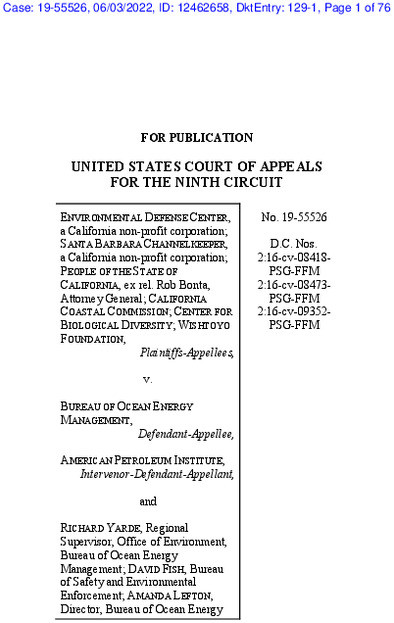 “This is an amazing victory for California’s coast and marine life,” said Kristen Monsell, oceans program legal director at the Center for Biological Diversity. “Fracking is incredibly dangerous and has no place in our oceans. This decision will prevent more toxic chemicals from poisoning fish, sea otters, and other marine life. And it brings us a step closer to ending offshore drilling once and for all.”

Today’s decision upholds a district court’s 2018 ruling that the Interior Department violated the Endangered Species Act in allowing fracking and acidizing in federal waters off California without carefully studying the risks to endangered species like sea otters.

The order also reversed the lower court’s ruling that the department’s cursory environmental assessment satisfied its obligations to take a hard look at the environmental impacts of allowing these extreme forms of oil extraction, finding instead that the agency must prepare a comprehensive environmental analysis.

The appeals court order prohibits Interior from issuing fracking permits until it completes Endangered Species Act consultation and an environmental impact statement that “fully and fairly evaluate[s] all reasonable alternatives.”

In doing so the three-judge panel noted that Interior “disregarded necessary caution when dealing with the unknown effects of well stimulation treatments and the data gaps associated with a program of regular fracking offshore California in order to increase production and extend well life.”

“Protecting the health and integrity of our coastal waters is essential to our commitment to conserving the marine ecosystem upon which Chumash people have thrived for more than 10,000 years,” said Mati Waiya, executive director of the Wishtoyo Foundation, a native led non-profit dedicated to the protection of Chumash lifeways and cultural resources. “We all celebrate this decision that honors the rights of our people and protects their precious maritime resources.”

The appeals court also held that the Interior Department violated the Coastal Zone Management Act when it failed to let the California Coastal Commission determine whether offshore fracking is consistent with California’s coastal management program.

Today’s decision is the result of three separate lawsuits filed by the Center for Biological Diversity and Wishtoyo Foundation, the state of California, and the Environmental Defense Center. The lawsuits challenged the federal government’s approval and environmental review of offshore fracking in the Pacific Ocean.

At least 10 fracking chemicals routinely used in offshore fracking could kill or harm a broad variety of marine species, including marine mammals and fish, Center scientists have found. The California Council on Science and Technology has identified some common fracking chemicals to be among the most toxic in the world to marine animals.