by CA YIMBY News
Pro-luxury development group California YIMBY has contributed over $126K to elect Jon Wizard, a paid staffer with YIMBY Action. Wizard is running for State Assembly in District 30 in the June 7 primary election. California YIMBY furthers a legislative agenda that favors supply-side market-rate housing production, and the profit of developers, over social equity. The contributions in support of Wizard are the largest campaign expenditures ever made by California YIMBY, and they represent a large percentage of Wizard's overall funding. Wizard's campaign received just over $146K total in cash contributions in 2022 (in addition to the expenditures from California YIMBY). Wizard has also made a $50K loan to his own campaign. 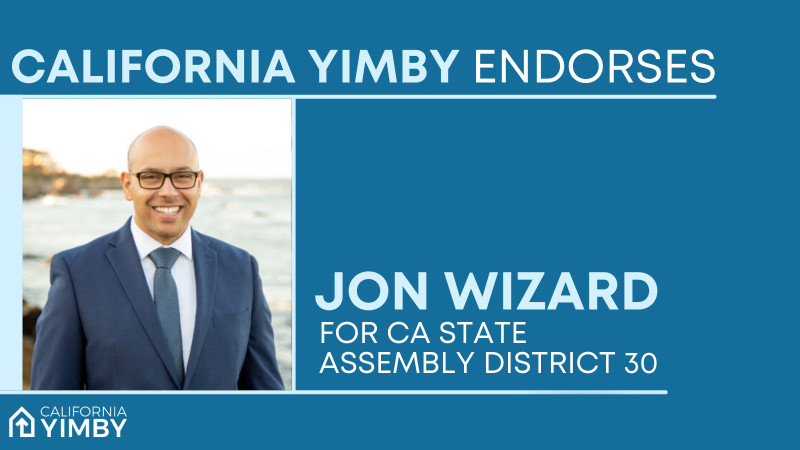 Jon Wizard has been employed by YIMBY Law, and its parent organization YIMBY Action, since January of 2021.

On the campaign trail in 2022, Wizard parrots familiar YIMBY talking points, including references to housing affordability issues in terms of supply and demand.

"Housing supply is the root cause of the affordability crisis," Wizard recently said on social media.

"The answer to the housing affordability crisis is to build more homes. At its extreme, if we built a billion homes in California, there’d be so many that anyone could find any type they want anywhere—and prices would plummet," Wizard said in another recent social media post.

The independent expenditure committee used $122,947.60 of the funds to produce a campaign mailer in support of Wizard, paid for in installments that were dated May 17 and May 27.

The Wizard campaign also received cash contributions from the following individuals employed by, or otherwise associated with, the YIMBY party:

The YIMBY Party in California is comprised of a patchwork of inter-related organizations. The main organizing group, California YIMBY, is a multi-million dollar political organization

YIMBY Law was created by the founder of the YIMBY movement, Sonja Trauss, in partnership with the San Francisco-based organization YIMBY Action. YIMBY Action organizes and collects dues from local area chapters of the YIMBY party. Trauss has referred to YIMBY Law as the "legal advocacy arm of the YIMBY Party".

California YIMBY and YIMBY Action are 501(c)(4) organizations, and are legally exempt from disclosing their funding sources. Some high-profile contributors from the tech industry, however, have made public their major financial contributions.

In 2018, tech company Stripe announced they were making a $1 million contribution to California YIMBY.

So far in 2022, the majority of the largest contributors to the California YIMBY Victory Fund PAC have been from the tech industry. These include $50,000 from Kenneth Duda, a software engineer at Arista Networks Inc.; $50,000 from Ron Conway, managing partner of SV Angel LLC; $15,000 from Robert McGrew, Vice President of Research at OpenAI L.P.; $10,000 from Andrew Sutherland, a software engineer at Qizlet Inc.; and $10,000 from Tom Zamudio, a self-employed software consultant. Some of these individuals have also made equally large or larger contributions to the California YIMBY PAC during prior election cycles.

Because California YIMBY has received so much of its funding from the tech industry, the organization has been referred to as a "tech PAC".
Related Categories: California | Santa Cruz Indymedia | Government & Elections | Health, Housing & Public Services
§Outlandish Neo-Liberalism from YIMBY Action's Jon Wizard
by CA YIMBY News 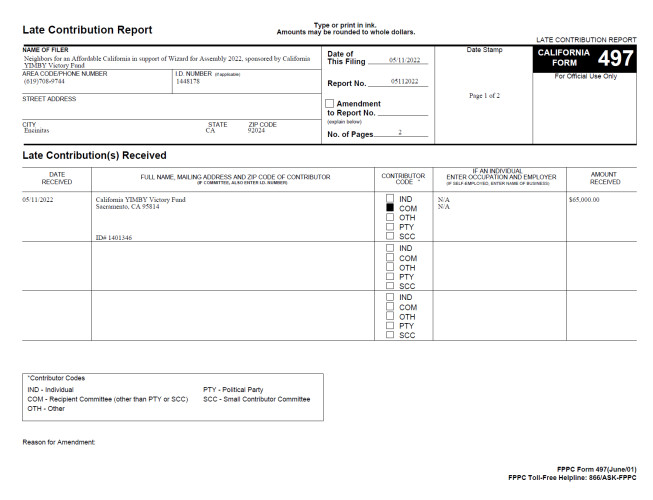 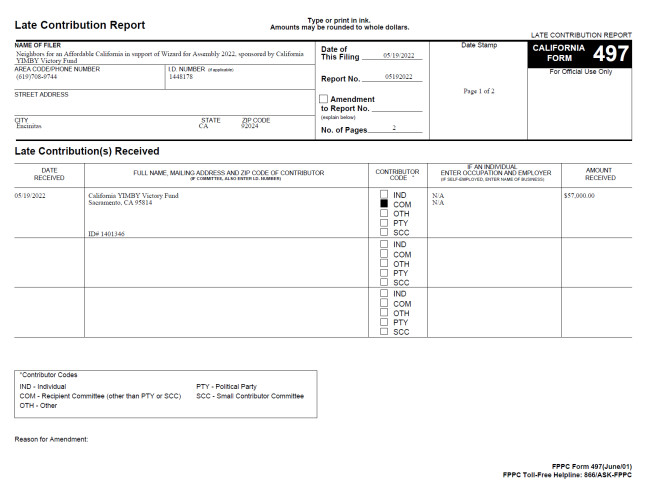 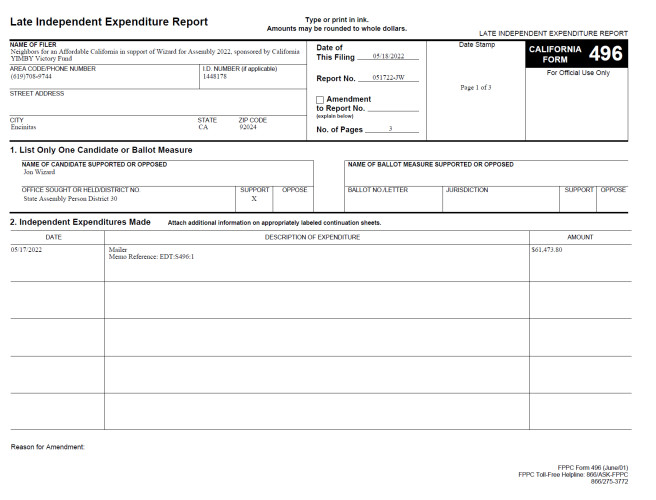 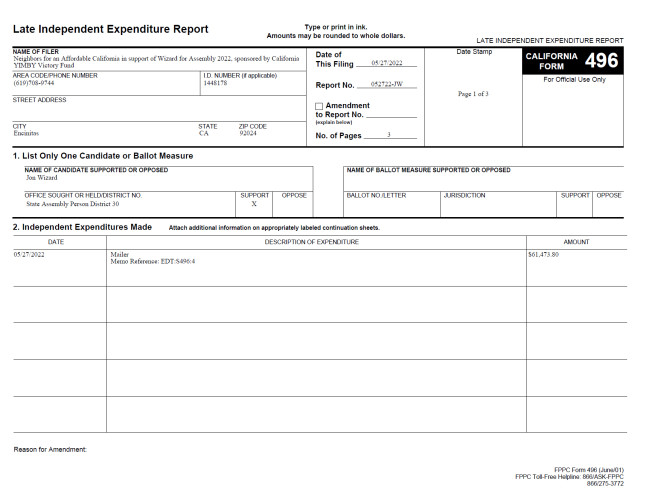 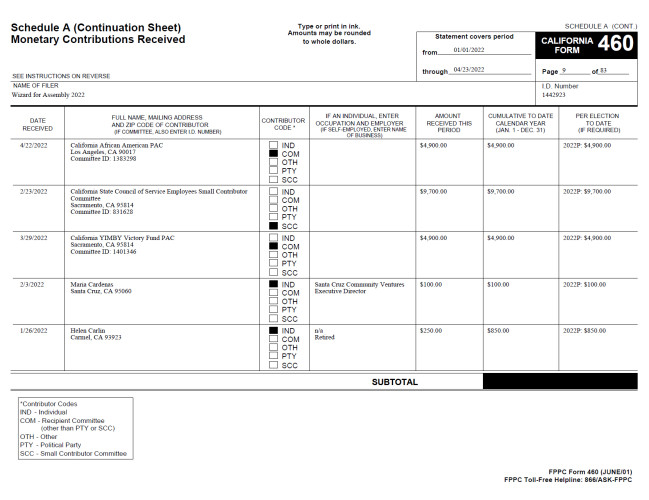 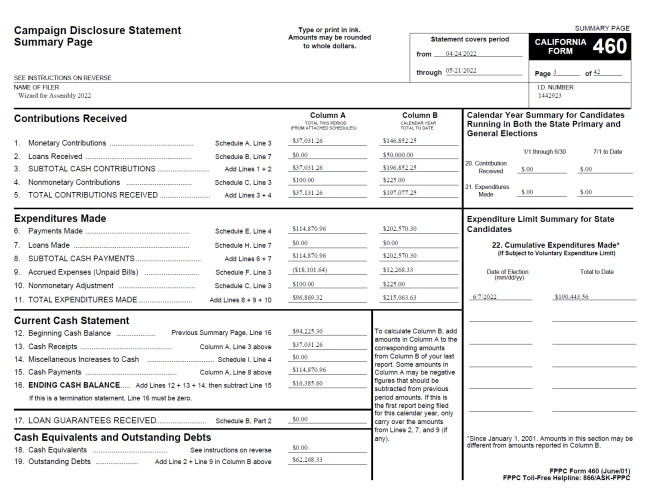 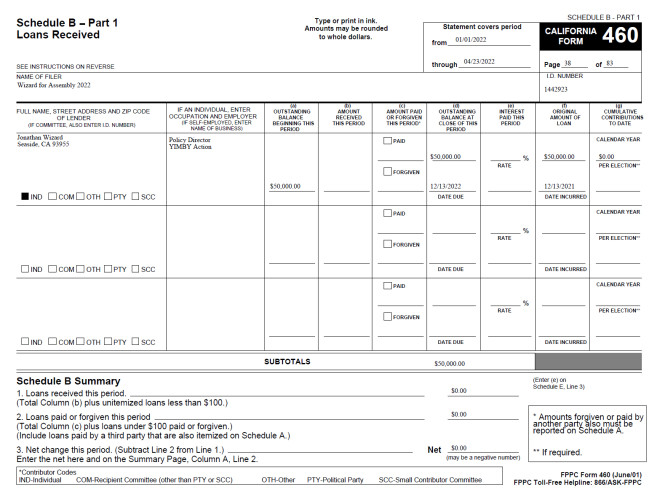 original image (1560x1186)
Add Your Comments
Support Independent Media
We are 100% volunteer and depend on your participation to sustain our efforts!