Add an Event
Newswire
Calendar
Features
Home
Donate
From the Open-Publishing Calendar
From the Open-Publishing Newswire
Indybay Feature
Related Categories: U.S. | Racial Justice
Rapid City Hotel Owner Arrested for Spraying Native Americans with Chemical Spray
by Brenda Norrell
Saturday May 28th, 2022 2:44 PM
RAPID CITY, South Dakota -- In this city that is synonymous with bordertown racism, the owner of a hotel here was arrested Friday after spraying Native Americans with a chemical spray as they protested racism at the Grand Gateway Hotel. 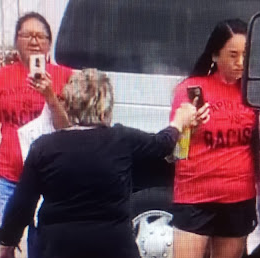 RAPID CITY, South Dakota -- In this city that is synonymous with bordertown racism, the owner of a hotel here was arrested Friday after spraying Native Americans with a chemical spray as they protested racism at the Grand Gateway Hotel.

Sunny Red Bear, director of racial equity at NDN Collective, was sprayed directly in the face.

“This is what we mean when we say that white supremacy is violent,” said Sunny Red Bear, racial equity director at NDN Collective. “No matter how long they lie dormant, peoples’ racist worldviews eventually come out in their actions.
A video of Uhre's arrest shows her being led away by police outside the hotel and crying.

According to the bail release, Uhre was released without any charge for bail. Lakotas said that Uhre's release shortly after her arrest -- with no bail charged, and the fact that she was not handcuffed by police when arrested -- reveals the preferential treatment for whites in Rapid City by law enforcement.

2KC Media reported, "Racist hotel owner Connie Uhre was arrested today on 3 counts of assault after she sprayed multiple people in the face with what she said was 'bug spray.'"

"On Friday, May 27, 2022, a small group of peaceful people was assembled in front of the Grand Gateway Hotel to spread ongoing awareness of Connie's racist comments said earlier this year, 'We will no longer allow any Native American on property.'"

"As a group of Native Youth was drumming prayer songs in front of the hotel, Connie Uhre parked her vehicle close to them and began to honk incessantly."

"Then she walked to the back of her vehicle to get the spray can that she used to spray multiple people in the face. A few hours later Connie was escorted out of her hotel by Rapid City Police covered in fake tears but not in handcuffs."

"Connie Uhre violated federal laws when she denied service to Native People in March but city officials and law enforcement have failed to take action."

"This is the racist reality Native People experience every day in their own Homelands and the city remains in denial about it. Imagine if it was a Native they had to arrest?"

"This is Oceti Sakowin and we have served you with an eviction notice already, either you can't comprehend or need a reminder: Racists Are Not Welcome," 2KC Media said in a statement.

NDN Collective said, “This incident will be added to the federal civil rights lawsuit that was filed in March. We now call upon the Department of Justice to intervene and hold Connie Uhre and the Grand Gateway Hotel accountable for these racist and illegal acts against our people."

"It requires aggressive action to dismantle white supremacy. Everybody in this community should be outraged." 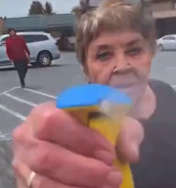 Grand Gateway Hotel owner Connie Uhre sprayed several Native Americans who were boycotting racist treatment by the hotel with Pledge. Uhre was charged with three counts of simple assault.
https://bsnorrell.blogspot.com/2022/05/rac...
Add Your Comments
Support Independent Media
We are 100% volunteer and depend on your participation to sustain our efforts!