Add an Event
Newswire
Calendar
Features
Home
Donate
From the Open-Publishing Calendar
From the Open-Publishing Newswire
Indybay Feature
Related Categories: International | Santa Cruz Indymedia | U.S. | Animal Liberation | Environment & Forest Defense
Eastern Monarch Butterfly Population Up Slightly, Still Below Extinction Threshold
by Center for Biological Diversity
Wednesday May 25th, 2022 8:04 AM
WASHINGTON, May 24, 2022 — The yearly count released today of monarch butterflies that overwintered in Mexico continues to show imperilment for the migratory butterfly. This year’s count of 2.84 hectares (7 acres) of occupied winter habitat is up slightly from last year but still below the 6 hectare threshold scientists say is necessary for the iconic pollinator to be out of the extinction danger zone in North America. 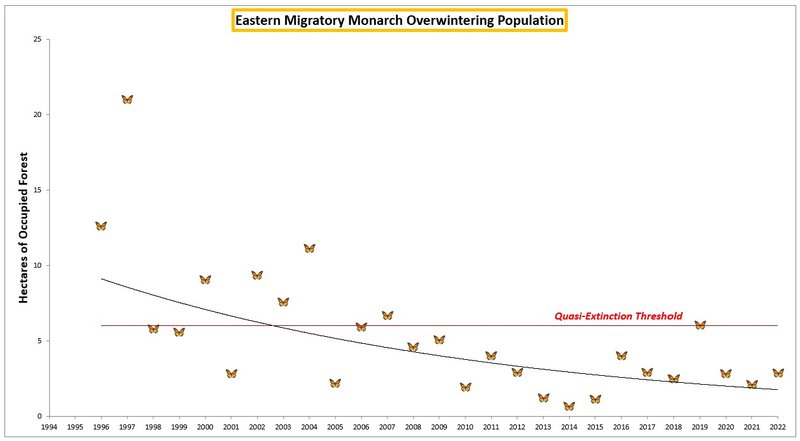 Overall, eastern monarchs have declined by around 85% since the mid-1990s.

“The decline of monarchs tells the story of the extinction crisis unfolding in the United States as policymakers fail to take the bold actions necessary to save wildlife habitat and rein in climate change,” said Tierra Curry, a senior scientist at the Center for Biological Diversity.

The annual count is conducted by Mexico’s Commission for National Protected Areas and WWF Mexico.

The eastern monarch population is made up the butterflies east of the Rocky Mountains and accounts for roughly 99% of all North American monarchs. They migrate each winter from the northern United States and southern Canada to oyamel fir forests on high-elevation mountaintops in central Mexico. Scientists estimate the population size by measuring the area of trees turned orange by the clustering butterflies. Their population has been perilously low since 2008.

Monarchs are currently on the candidate waiting list for Endangered Species Act protection. The U.S. Fish and Wildlife Service has a 2024 deadline to propose them for protection as threatened.

“We petitioned for protection for monarchs eight years ago, but they still face an onslaught of pesticides and habitat loss,” said George Kimbrell, legal director at the Center for Food Safety. “This year’s count shows that they continue to urgently need Endangered Species Act protection. FWS has already agreed to make a final decision; now they only need make the correct one, the one conservation, science, and the law requires: protect monarchs.”

Monarchs are threatened by pesticides, climate change, sprawl and illegal logging of the forests where they migrate for the winter. They are also threatened during their migrations by mortality from roadkill and habitat fragmentation.

Scientists led by the Center for Biological Diversity and the Center for Food Safety petitioned the Fish and Wildlife Service to protect the butterfly under the Endangered Species Act in 2014.

Monarchs have lost an estimated 165 million acres of breeding habitat in the United States to herbicide spraying and development in recent decades. The caterpillars only eat milkweed, but the plant has been devastated by increased herbicide spraying in conjunction with corn and soybean crops that have been genetically engineered to tolerate direct spraying. The butterflies are also threatened by neonicotinoid insecticides, fungicides and other chemicals that are toxic to young caterpillars.

Monarch butterflies west of the Rocky Mountains overwinter on the central coast of California. Their numbers rebounded this year to more than 200,000 butterflies after coming near total collapse the previous winter, but their population is still down more than 95% since the 1980s.

In Canada monarchs are slated for listing as endangered under the Species At Risk Act. In Mexico they are considered a species of special concern.