Add an Event
Newswire
Calendar
Features
Home
Donate
From the Open-Publishing Calendar
From the Open-Publishing Newswire
Indybay Feature
Related Categories: East Bay | Education & Student Activism | Health, Housing & Public Services | Labor & Workers
Oakland Education Association (OEA) Stands Against the Proposed A’s Stadium At Howard Terminal
by repost
Monday May 23rd, 2022 9:58 AM
The Oakland Education Association has voted to oppose the GAP A's billionaire owner John Fisher's proposed stadium at the Howard Terminal in the Port of Oakland. The Democrats also with the support of the Alameda Labor Council and Alameda Building Trades Union leadership also want to give Fisher $850 million in tax subsidies. The president of the OEA Keith Brown is also the president of the Alameda Labor Council. 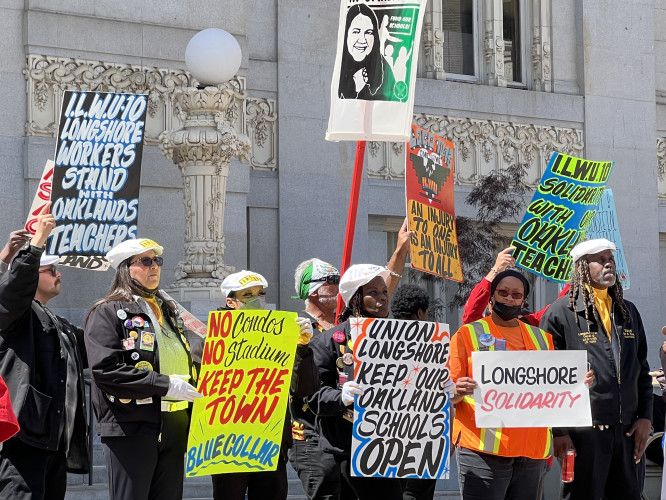 Whereas the Port of Oakland is public land that is the worksite of 84,000 union members who work well-paying jobs;
Whereas our fight against the closure and privatization of our public schools is one in the same with the fight of port workers against the closure and privatization of Howard Terminal
Whereas John Fisher, the owner of the A’s is also the chairman of KIPP charter school chain and the Charter School Growth Fund, two leading institutions of privatization;
Whereas in 2019 OEA’s Rep Council unanimously passed a resolution supporting the ILWU’s struggle against development at the port, demanding that “Howard Terminal remain a maritime facility,” and sent members to march in solidarity with longshoremen at the May 1, 2019 demonstration;
Whereas the proposed stadium would commit nearly $1 billion in taxpayer money to this development project, which includes thousands of luxury residential units, a 400-room hotel, and retail space – all while our schools are underfunded and suffering budget cuts
Whereas we are opposed to the continued gentrification and push-out of working class people in the City of Oakland;

Whereas OEA is confident that the needs of other workers for jobs, and especially the construction trades, can be met by rebuilding the Coliseum complex site which would also be of immediate benefit to East Oakland where working class families are concentrated, many of them immigrants;
Therefore be it resolved that:
The OEA stands in opposition to the proposed stadium and housing development plan at Howard Terminal
The OEA stands in solidarity with the ILWU Local 10 in opposition to attacks on union jobs
OEA reps and leadership shall distribute materials at school sites, on social media, and via constant contact to educate members on this position.
OEA shall put out a press release declaring its position of solidarity with the ILWU Local 10 and opposition to the Howard Terminal stadium within three days of this motion passing.
Maker: Michael Shane - Sojourner Truth
Second: Alyse Schneider - Oakland Tech

On Monday May 2nd, the Oakland Education Association (OEA) Representative Council voted nearly two to one to stand in solidarity with the International Longshore and Warehouse Union Local 10 in their fight against billionaire Oakland A’s owner John Fisher and his plan to build a new ballpark at the Port of Oakland’s Howard Terminal. OEA is in opposition to this land grab by Fisher, which plans to commit nearly $1 billion in taxpayer money for necessary infrastructure to this development project, the plan includes thousands of luxury residential units, a 400-room hotel, and retail space at a heavy industrial seaport terminal. The Fisher family is also heavily invested in the privatization of public education in the U.S. with both the Knowledge is Power Program (KIPP) and Charter School Growth Fund. OEA teachers know full well this privatization will lead to the continued gentrification of Oakland, driving working class families of color out of Oakland.

This strong stand taken by elected site reps against the dual privatization of public land and resources comes off the heels of a one-day unfair labor practice strike against Oakland Unified School District’s (OUSD) harmful plan to close or merge eleven schools in violation of the agreement with OEA to not close schools without an equity analysis and a period of engagement with affected school communities. Both ILWU Local 10 and OEA walked off the job on April 29 and rallied in downtown outside city hall and then marched together to OUSD HQ at 1000 Broadway, where the district wastes $3 million annually for offices that remain empty while central office continues to work from home.

The Port of Oakland is public land that is the worksite of 84,000 union members who work well-paying jobs with good benefits; OUSD is the worksite of 2,700 union members with good benefits, and roughly 36,000 students and families who will fight to keep our neighborhood schools open.
The fight against closure and privatization of our public schools is one and the same with the fight of port workers against the closure and privatization of Howard Terminal. OEA reps and leadership will distribute materials at school sites, on social media, and via constant contact to educate members on this position.
An Injury to One is an Injury to All!
SLAP Schools & Labor Against Privatization
http://www.slapbayarea.org
https://docs.google.com/document/d/1qM8HIL...
Add Your Comments
LATEST COMMENTS ABOUT THIS ARTICLE
Listed below are the latest comments about this post.
These comments are submitted anonymously by website visitors.