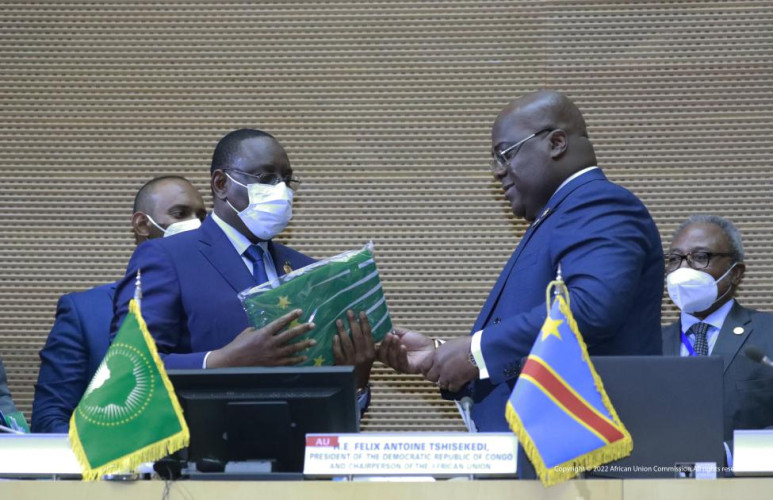 The event took place today, Saturday 5 February 2022 during the ongoing Thirty-Fifth (35th) Ordinary Session of the Assembly of the Union, holding physically at the AU Headquarters in Addis Ababa under the theme: “Strengthening Resilience in Nutrition and Food Security on the African Continent: Strengthening Agro-Food Systems, Health and Social Protection Systems for the Acceleration of the Human, Social and Economic Development”.

President Macky Sall of Senegal is taking over the baton of command from H.E. Felix- Antoine Tshisekedi Tshilombo, President of the Democratic Republic of Congo (DRC), who has concluded today his term as the Chairperson of the African Union for the year 2021.

The event took place during the official opening of the 35th AU Summit of Heads of State and Government, in the presence of the Chairperson of the AU Commission, H.E. Moussa Faki Mahamat, the Deputy Chairperson of the AUC, H.E Dr. Monique Nsanzabaganwa, representatives of the UN, the Regional Economic Commission, dignitaries and invited guests as well as the AU staff.

The composition of the new bureau of the Assembly of the Heads of State and Government of the African Union for 2022 as presented by the Dean of the Permanent Representative Committee (PRC) is as follows:

Chairperson of the African Union (AU) – Republic of Senegal, (West African region)
First Vice Chair of the Union – Consultations are still ongoing;
Rapporteur – Democratic Republic of Congo (DRC) – (Central African region);
Second Vice Chair of the Union – Libya, (Northern Region); and
Third Vice Chair of the Union – Angola, ( Southern Region);
In his handing over speech, President Felix- Antoine Tshisekedi wished the new AU Chairperson, a successful Chairmanship and thanked the Heads of States of AU Member States as well as the AU outgoing bureau, for their support during the tenure of his mandate which he said, was marked by the prevailing sanitary crisis caused by the COVID19 pandemic.

President Tshisekedi highlighted some of the achievements under his chairmanship of the Union notably, the economic empowerment of the women and youths, the enhancement of democracy and good governance, among other development programs under Agenda 2063.The outgoing Chair of the Union further underlined the initiatives undertaken under his leadership to address the challenges of the COVID-19 pandemic.

In his acceptance speech, President Macky Sall said he appreciates the honor coupled with the responsibility and the trust invested in his person, and the members of the new Bureau, to lead the destiny of the Organization for the next one year., “I thank you and assure you of our commitment to work together with all member countries in the exercise of our mandate” indicated the incoming Chair of the Union. “I pay tribute to the founding fathers of the Organization. Six decades later, their luminous vision continues to inspire our living together and to illuminate our united march towards the ideal of African integration” He added.

President Macky Sall further noted that, it is precisely in this pan-African spirit that President Léopold Sédar Senghor had proposed, at the OAU summit of July 1964, to establish "a permanent political and moral authority of the Conference of Heads of State and Government" to give high-level impetus to the management of the affairs of the continent.

Commending the work done by his predecessor the outgoing chair of the Union, H.E Félix Antoine Tshisekedi Tchilombo, the newly elected Chair of the Union expressed appreciation to the considerable efforts devoted to the service of the African continent by the outgoing Chair.

He further noted that, “as our Union celebrates its 20th anniversary this year, we can be proud of the progress made under major initiatives such as NEPAD, PIDA, APRM, Vision 2063, institutional reform, the Great Green Wall, the AfCFTA and more recently our coordinated response to the COVID-19 pandemic.

At the same time, our challenges remain numerous and pressing; notably in the areas of peace and security, the fight against terrorism, environmental protection, health and economic and social development…” “I do not forget the resurgence of the phenomenon of coups d’état which constitutes a major attack on democracy and institutional stability on the continent”. Concluded the new AU Chair.

About the African Union:

The AU Vision is to accelerate progress towards an integrated, prosperous and inclusive Africa, at peace with itself, playing a dynamic role in the continental and global arena, effectively driven by an accountable, efficient and responsive Commission.

Mrs. Esther Azaa Tankou| Head of Information Division | African Union Commission | Tel: +251 (0) 911361185 | E-mail: yamboue [at] africa-union.org |
http://www.africaunityweek.com
Add Your Comments
Support Independent Media
We are 100% volunteer and depend on your participation to sustain our efforts!