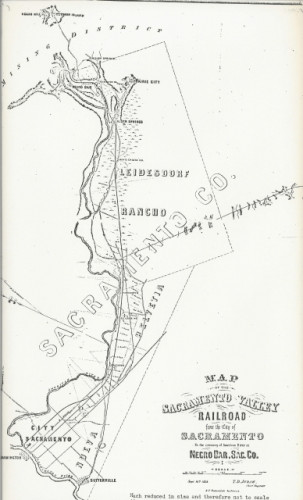 I arrived at Sutter's Fort on or about December 10, 1845 and I remained there about four days. On the 14th, I traveled from the Fort towards the head-waters of King's River, with the object of meeting the main body of my party, which I had left at Walker's Lake.

Returning, I reached Sutter's Fort, on January 15, 1846. I remained four days, and on the 19th left the embarcadero in Capt. Sutter's launch, accompanied by eight of my party, for Yerba Buena, where we arrived in the course of a day or two. If my memory serves me, we reached here on the 20th. As the river was high at that time, we had the advantage of the current, and so made a quick passage. Capt. William A. Leidesdorff and Capt. William Hinckley were the principal acquaintances I made. I was there but a short time, but became well acquainted with them.

I visited the pueblo of San Jose with Capt. Hinckley and arranged with Capt. Leidesdorff to go with him to Monterey, and having a day or two of leisure before he could be ready, Capt. Hinckley offered to go with me to see the quicksilver mines, near San Jose, which Capts. Leidesdorff and Hinckley had mentioned to me as an object of interest, and as having been recently discovered.

I left Yerba Buena on or about Jan. 21, 1846, at 1 o'clock, P.M., in a whale boat. We reached the embarcadero, now Alviso, about daybreak the next morning. There we procured horses, and passing through San Jose, reached the mine on the same day. I think no one went with me to the mine but Hinckley. We arrived there about noon.

At the mine, Capt. Hinckley introduced me to Mr. Castillero, the owner of the mine, who showed me about -- showed me the excavation from whence he had taken the ore; showed me two or three heaps of the ore, and gave me some specimens, some of which I brought away.

Before visiting the mine, Capt. Leidesdorff and myself had had some conversation together with regard to purchasing the mine. When there, I spoke slightly with Castillero on the subject, and Mr. Hinckley also said something to him at greater length, tending to the same end, but Castillero was not at all disposed to converse about selling. At this time, I think, Castillero was engaged in building a house below, in the valley, to be used for the occupation of himself or his workmen. He also went through the process, roughly, of extracting the quicksilver from the ore, by putting some on red-hot iron, and collecting the fumes in a cup.

We remained there perhaps two hours. I learned from Castillero that he held the mine under a denouncement. I then, for the first time, became acquainted with the Spanish system of acquiring mines by denouncement. Whether I learned this in answer to questions propounded by me to Castillero, or whether he volunteered the statement, I do not now remember. The impression distinctly and strongly remained upon my mind as a piece of knowledge acquired at that time, and which I afterwards made use of in this State during my operations in 1849.

The discovery of gold in the rock was first made in 1849, on my Mariposa tract. It was considered that that discovery was the first of the kind in California. In the uncertainty respecting titles in California, which then existed, I denounced the mine before Judge Geary, in San Francisco, before Alcalde May, in San Jose, and before the Alcalde in Stockton, whose name I do not remember. That vein is now known as the Old Mariposa or Fremont vein, near the town of Mariposa. I made these denouncements entirely upon the information which I derived at the time spoken of from CASTILLERO. When I left California in 1847, the gold placers had not been discovered. I heard of it as I was leaving the Western frontier of the United States in 1848, to return to California, where I arrived in the Spring of 1849. I returned directly from the mine to Yerba Buena, which place I left about sundown on Jan. 24, 1846, in company with Captains Leidesdorff and Hinckley, and remained that night at Sanchez' ranch.

In the morning Capt. Hinckley returned to Yerba Buena, and Capt. Leidesdorff and myself continued our journey to San Jose, where we stopped at Sunol's house. The next night we spent with Mr. Gowez, in the Canada San Juan, and the day following, the 29th, we reached Mr. Larkin's house at Monterey. I then called on Gen. Castro, and the Prefect, named Castro.

On the journey to Monterey, I talked the subject of purchasing the Almaden mine over with Capt. Leidesdorff, but the amount required was larger than my means. At that time, the mine was exceptional to any other kind of property; everything else, such as land, cattle, etc., being very low, and of little exchangeable value; while the mine was considered as something of immense value, compared with other property.
Thirty thousand dollars, which was the sum for which Leidesdorff supposed that the mine might be purchased, was considered an immense sum of money in California in those days.

This circumstance gave great prominence to the mine. I think I have not been at the mine since January, 1847. I do not remember that I ever heard it designated other than as the quicksilver mine. I never, at that time, heard it called the Almaden, so far as I can recollect; this latter designation stands in my mind as one subsequently given.

At the end of February, I crossed the mountains called the Sierra de [???]os Gatos, part of the Santa Cruz Mountains, early in March, encamped on the Gavilan peak, Salinas range, thence around by Sutter's Fort, north.

I had some difficulties with the California authorities; those difficulties covered the space of four or five days, and occurred in the early part of March. I remember to have received a Spanish grammar and some letters from Mr. Larkin about the time, while I was in camp. Mr. Larkin sent information to Mazatlan, in relation to my difficulties, and I have always supposed that the sloop-of-war Portsmouth came up in consequence of the receipt of the information.
Add Your Comments
Support Independent Media
We are 100% volunteer and depend on your participation to sustain our efforts!