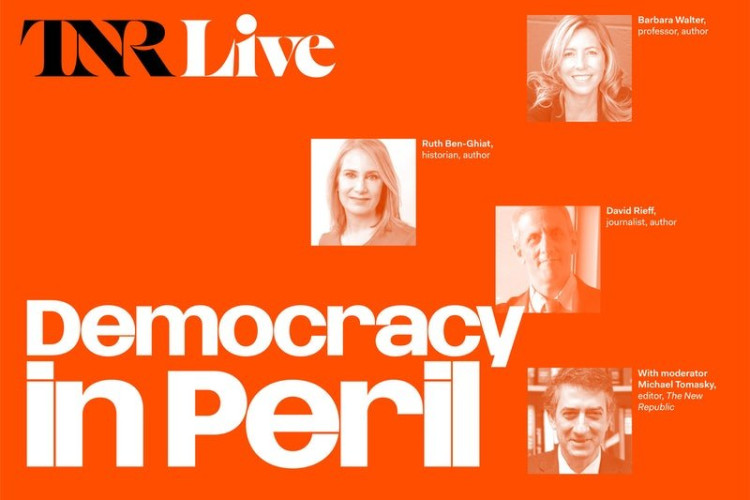 Import event into your personal calendar
Date:
Wednesday, May 18, 2022
Time:
9:00 AM - 10:00 AM
Event Type:
Panel Discussion
Organizer/Author:
The New Republic magazine
Location Details:
Online via Zoom
Join The New Republic for a livestream of TNR Live: Democracy in Peril. Can liberal democracy survive? The evening's conversation will be moderated by TNR editor, Michael Tomasky.


Ruth Ben-Ghiat is a historian who writes about authoritarianism, democracy protection, and propaganda. She is Professor of History and Italian Studies at New York University, the recipient of Guggenheim, Fulbright, and other fellowships, and Advisor to Protect Democracy. She is an MSNBC columnist, a regular contributor to CNN and The Washington Post, and provides live commentary on CNN, MSNBC, and other networks. She publishes Lucid, a newsletter on threats to democracy. Her latest book, Strongmen: Mussolini to the Present (2020, paperback with new epilogue on Jan. 6, 2021), looks at how illiberal leaders use propaganda, corruption, violence, and machismo - and how they can be defeated.


David Rieff is a New York-based journalist and author. During the nineteen-nineties, he covered conflicts in Africa (Rwanda, Burundi, Congo, Liberia), the Balkans (Bosnia and Kosovo), and Central Asia. Rieff has written extensively about Iraq, and, more recently, about Latin America. He is the author of eight books, including Slaughterhouse: Bosnia and the Failure of the West and A Bed for the Night: Humanitarianism in Crisis. He has published numerous articles in The New York Times, the Los Angeles Times, The Washington Post, The Wall Street Journal, Le Monde, El Pais, The New Republic, World Affairs, Harper's, The Atlantic Monthly, Foreign Affairs, The Nation, and other publications. His book The Reproach of Hunger: Food, Justice, and Money in the 21st century was published by Simon & Schuster in October 2015. Rieff’s latest book In Praise of Forgetting: the Irony of Historical Memory was published in April 2016 by Yale University Press.


Barbara F. Walter is the Rohr Professor of International Affairs at the University of California, San Diego. She is the New York Times bestselling author of How Civil Wars Start and How To Stop Them, as well as numerous other books on civil wars. Walter is a member of the Council on Foreign Relations, a frequent guest on CNN, and an active consultant for the World Bank, the United Nations, the Departments of Defense and State, and the January 6th committee. When not doing research, she writes for the Washington Post, the Wall Street Journal, Time magazine, and the Los Angeles Times. In 2012, she founded the blog Political Violence @ a Glance (with Erica Chenoweth) which sometimes beats out the Washington Post's Monkey Cage for Best Blog of the Year. Her real passion, however, is to paint, draw, and do anything involving art.


Michael Tomasky is editor of The New Republic, a longtime liberal writer, editor, and commentator. Most recently, he was a columnist and editor at The Daily Beast and remains editor of Democracy: A Journal of Ideas, a quarterly journal based in Washington, both positions he’s held for around a decade. Before that, he was the first U.S. editor of The Guardian as it expanded its American operations, and before that, the editor of The American Prospect. He has contributed frequently to The New York Review of Books and The New York Times. He is the author of five books, most recently If We Can Keep It: How the Republic Collapsed and How It Can Be Saved.


Added to the calendar on Sat, May 14, 2022 3:39PM
Related Categories: U.S. | Government & Elections
Add Your Comments
Support Independent Media
We are 100% volunteer and depend on your participation to sustain our efforts!