Join the Socialist Feminists at the Bans Off Our Bodies March! 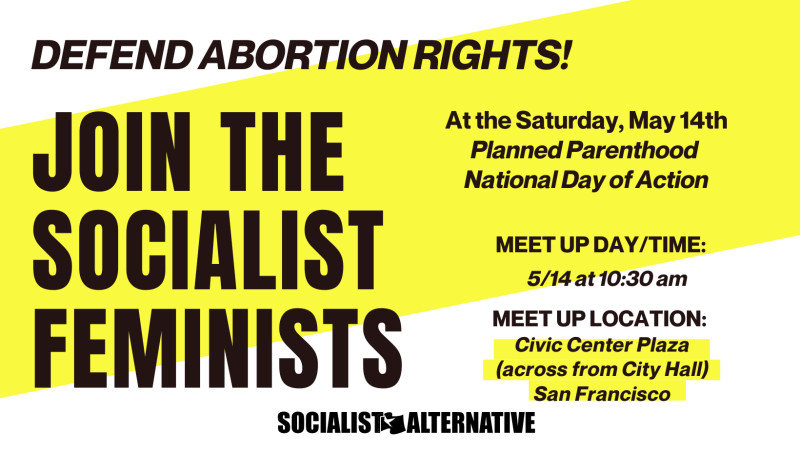 We need a socialist feminist movement to defend Roe. We will be assembling at 10:30 across the street from City Hall, just before the "Bans Off Our Bodies" march in SF. Join us!

Since the news broke last week of the leaked SCOTUS draft opinion that would overturn Roe v. Wade, people have been expressing their outrage at the possibility of restrictions on reproductive rights. Thousands have marched and rallied from coast to coast, and we've been out shoulder to shoulder with working people and youth every step of the way, calling for protests and action conferences nationwide.

The SCOTUS decision on the table goes beyond abortion rights, and would lay the foundation for more attacks on LGBTQ+ rights and access to contraception. We can't rely on calls to "vote blue" in November when the SCOTUS opinion is set to come down over the summer, and Democrats already control Congress and the White House. Roe must be codified now, and reproductive rights expanded to guarantee free, safe abortion on demand for all!

So we're calling on all working class, students, and young people across SF and the Bay Area to join us as part of a socialist feminist block at the national day of action on Saturday. We will come to the march armed with a banner, chants, signs and next steps for coming together to plan the next action to escalate the struggle.

This fight is urgent, and we need to get organized and take action now!

Contact us on social media: Instagram Facebook
Added to the calendar on Thu, May 12, 2022 9:28PM
Related Categories: San Francisco | Health, Housing & Public Services | Womyn
Add Your Comments
Support Independent Media
We are 100% volunteer and depend on your participation to sustain our efforts!