Add an Event
Newswire
Calendar
Features
Home
Donate
From the Open-Publishing Calendar
From the Open-Publishing Newswire
Indybay Feature
Related Categories: East Bay | Labor & Workers
ILWU 10 Backs OEA Strike Against Closure of Oakland Schools & Privatization of Port
by Labor Video Project
Thursday Apr 28th, 2022 11:52 AM
ILWU Local 10 at a press conference supported the OEA teachers strike against the closures of public schools in Oakland. They were joined by parents of students and also other unions.
SEIU 1021 leaders supported the teachers and also adamantly opposed the privatization of Howard Terminal in the Port of Oakland which they said would destroy the working port of Oakland. They were also supported by USW Local 5 president PK White from the striking Chevron Richmond refinery workers. 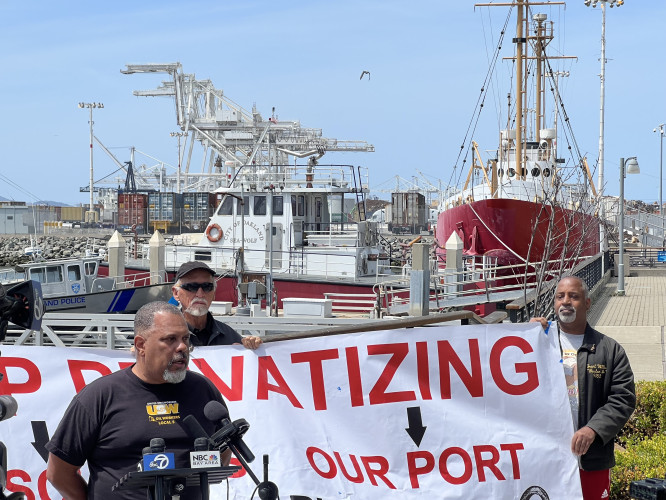 original image (4032x3024)
Schools and Labor against Privatization SLAP held a press conference on April 27, 2022 at the Port of Oakland Commission offices near the Howard Terminal to report on the planned united action by ILWU Local 10 and OEA members and rank and file leaders.

ILWU Local 10 former president Trent Willis supported the OEA strike on April 29 2022 against the closure of 11 schools in mostly Black and Brown communities and he compared it to the privatization of public resources and the Port Of Oakland. School parents also spoke about their fight to stop the closures of their children's schools and their appeals to OEA teachers to strike against the closures.

Also USW 5 president PK White spoke in support of stopping the closure of the schools and also opposed the privatization of the Port of Oakland for a tax funded stadium for billionaire GAP A's owner John Fisher. His union members are still striking against the Chevron refinery in Richmond where there are growing health and safety dangers.

ILWU Local 10 will be having a stop work meeting on Friday a and joining with OEA teachers, students and parents at a rally at Oscar Grant Plaza or Oakland City Hall.

For more information on SLAP
slapbayarea.org 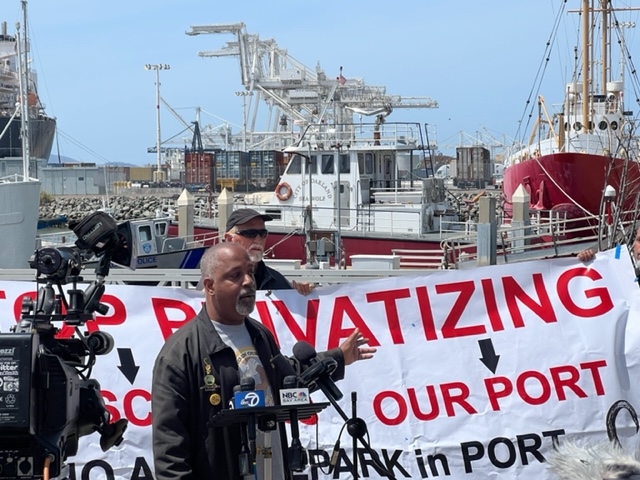 Former ILWU Local 10 president Trent Willis spoke at a press conference of SLAP Schools and Labor Against Privatization and announced that the ILWU 10 was joining with the OEA teachers against the closure of schools in Black and Brown communities and this was the same fight against the privatization of the Port of Oakland for billionaire GAP & A's owner John Fisher.
https://youtu.be/uHwkSzCNCcU
§Oakland Schoo Parents Supported OEA Strike To Stop School Closures
by Labor Video Project
Thursday Apr 28th, 2022 11:52 AM 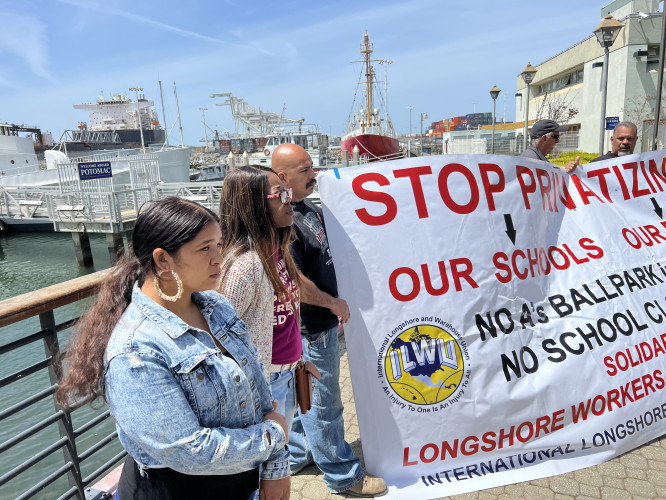 original image (4032x3024)
Parents of Oakland students at schools threatened with closure by the school district joined the SLAP press conference at the Port of Oakland. They said that they had urged the teachers to go on strike to stop the closures of their community schools and also they opposed the expansion and opening of charters which is being pushed by the district as they close public schools.
https://youtu.be/uHwkSzCNCcU
Add Your Comments
Support Independent Media
We are 100% volunteer and depend on your participation to sustain our efforts!