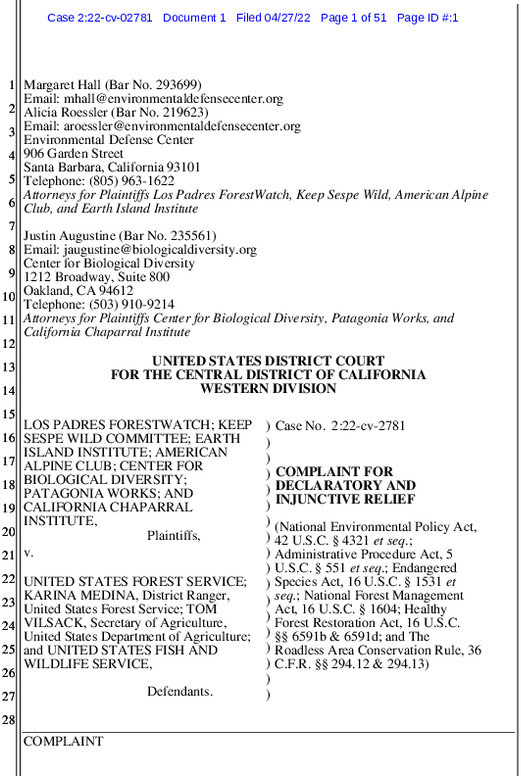 Download PDF (438.1KB)
VENTURA, Calif.— A coalition of environmental, business and recreational organizations — joined by the county of Ventura and the city of Ojai — filed suit in federal court today to challenge a commercial logging and vegetation removal project atop Pine Mountain and Reyes Peak in the Los Padres National Forest.

The project area — equivalent in size to 575 U.S. football fields — is located on ancestral lands of the Chumash. It is historically and culturally important to Indigenous people, popular with locals and tourists for a range of recreational activities, designated critical habitat for the endangered California condor, and home to other sensitive wildlife, rare plants, old-growth conifer forests and unique ecosystems.

As today’s legal actions against the U.S. Forest Service note, more than one-third of the project area is in a protected roadless area that has never been degraded by commercial logging or other industrial activities. The area is proposed for wilderness protection under the bipartisan Central Coast Heritage Protection Act (H.R. 2199), now awaiting final approval in the Senate.

“We’re proud to stand with Indigenous leaders, local businesses, conservation and recreation groups, and city and county governments in demanding a more thoughtful environmental review of this harmful project,” said Los Padres ForestWatch executive director Jeff Kuyper. “Pine Mountain must be protected, not offered up to logging companies using loopholes that make a mockery of our bedrock environmental laws.”

“There is no question that Reyes Peak will be adversely affected by this logging project, which authorizes the removal of large trees in an area that includes unique ‘sky island’ habitat, sacred cultural sites, potential wilderness, and sensitive wildlife,” said Maggie Hall, a senior attorney at the Environmental Defense Center. “The Forest Service’s approval of the project despite these impacts violates several important environmental laws.”

“This commercial logging project will hack a brutal scar through one of Los Padres National Forest’s most beautiful roadless areas,” said Justin Augustine, a senior attorney at the Center for Biological Diversity. “The Forest Service wants to let chainsaws chew up old-growth conifers and crucial habitat for wildlife. It’s immoral, it’s illegal, and we hope to stop it in court.”

“Los Padres Forest seems to have no concern about logging many thousands of old-growth conifers from Pine Mountain,” said Alasdair Coyne, conservation director at Keep Sespe Wild. “These ‘sky islands’ of giant trees only survive at the rare high elevation peaks of Southern California’s national forests. Threatened by climate change, they need protection, not logging.”

“Pine Mountain is 90 minutes from our corporate headquarters in Ventura and the area is important to our employees and customers because of its outdoor recreation opportunities including rock climbing, hiking and camping,” said Hans Cole, head of Environmental Activism at Patagonia. “This mountain is also home to old-growth conifers and some of the most diverse and unique habitats in the Los Padres National Forest. We have opposed this project since it was unveiled in 2020, we have been advocating for more conservation of this area since the Central Coast Heritage Protection Act was introduced in the U.S. Senate in 2017, and we have been supporting the grassroots environmentalists protecting Los Padres National Forest since 2004.”

The project would allow unlimited mechanized cutting and removal of live and dead trees of any age up to 2 feet in diameter and an undisclosed number of trees up to 5 feet in diameter, as well as the destruction of chaparral across 755 acres.

The lawsuits were filed in the U.S. District Court for the Central District of California in Los Angeles. They assert violations of the National Environmental Policy Act, Roadless Area Conservation Rule, Endangered Species Act, and National Forest Management Act, and they take aim at the Forest Service’s failure to collaborate with stakeholders.

Such collaboration is required whenever the Forest Service relies on a categorical exclusion under the National Environmental Policy Act to expedite a project. Originally designed for small maintenance projects like painting buildings, categorical exclusions allow forest officials to bypass standard requirements under the National Environmental Policy Act to consider project alternatives and conduct a detailed study of potential impacts on the area’s unique ecosystems — studies the plaintiffs say are crucial to the protection of important environmental, recreational, and cultural resources.

The plaintiffs claim that the Forest Service violated the 2001 Roadless Area Conservation Rule’s prohibition on the removal of larger trees. The suit also asserts violations of the Endangered Species Act for allowing the removal of an unlimited number of large trees in which endangered California condors roost, providing places to rest during long flights across the landscape. The project would also harm rare California spotted owls, northern goshawks, rare plants, and two species of bats whose populations are declining.

The plaintiffs also say that the project violates the National Forest Management Act because the agency failed to comply with the Los Padres National Forest Plan standards that protect scenic integrity and the natural character of the area. Clearing thousands of trees and hundreds of acres of chaparral on Pine Mountain, an area prized for its natural beauty and abundant outdoor recreation opportunities, is a drastic elimination of native vegetation with effects that will linger for generations and is not allowed under the 2005 Forest Plan for the Los Padres National Forest.

The project was approved over the objections of local elected officials, Indigenous leaders, scientists, more than 30 area businesses, 70 environmental and social justice organizations, and 15,000 members of the public. Those objections amounted to a multitude of comments many times greater than any single project in Los Padres National Forest has received. Despite this unprecedented level of community opposition, the Forest Service failed to make any meaningful changes to the project and approved it in September 2021.

The project is part of a spate of proposals issued during the Trump administration when timber targets were increased, the use of categorical exclusions was encouraged, and the price that timber companies paid for lumber harvested on certain public lands was lowered. Three similar projects have been proposed in the immediate region, including a project along Tecuya Ridge in which a panel of federal appeals court judges recently found the Forest Service in violation of the Roadless Rule. Another, on Mount Pinos, is scheduled for approval this summer.

The organizations filing the lawsuit are Los Padres ForestWatch, Keep Sespe Wild Committee, Earth Island Institute, and American Alpine Club, collectively represented by the Environmental Defense Center, along with the Center for Biological Diversity, California Chaparral Institute, and Patagonia Works, represented by the Center for Biological Diversity. The county of Ventura and the city of Ojai each filed similar suits simultaneously with the other plaintiff groups. The cases will likely be combined and considered together.


For more information about the logging project, a list of frequently asked questions, ways to donate to the legal fund, and a list of partners, allies, and elected officials who are calling for the protection of Pine Mountain, visit protectpinemountain.org.

American Alpine Club is a nonprofit member organization with more than 24,000 members. Its vision is to create "a united community of competent climbers and healthy climbing landscapes."

California Chaparral Institute is dedicated to preserving what remains of California's chaparral — the state's most characteristic, yet most imperiled, native shrubland ecosystem.

John Muir Project is dedicated to the ecological management of our federal public forestlands to support and restore the full complement of native biodiversity in these forest ecosystems, which have been severely degraded and damaged by decades of commercial logging and suppression of wildland fires.

Los Padres ForestWatch protects wildlife, wilderness, water, and sustainable access throughout the Los Padres National Forest and the Carrizo Plain National Monument through education, advocacy, and legal action for the benefit of our communities, climate, and future generations.

Patagonia is a Certified Benefit Corporation based in Ventura, CA that is recognized internationally for product quality and environmental activism. Patagonia has contributed more than $145 million in grants and in-kind donations to date to grassroots nonprofits working to protect people and the planet.

City of Ojai Recognized as an environmental, spiritual and cultural hub, the City of Ojai is a gateway to the Los Padres National Forest, home to more than 8,000 residents and a weekend retreat for thousands of visitors seeking respite from city life.

County of Ventura is dedicated to protecting the unique environmental, recreational, and cultural resources in the Pine Mountain and Reyes Peak area which is utilized and treasured by numerous Ventura County residents.