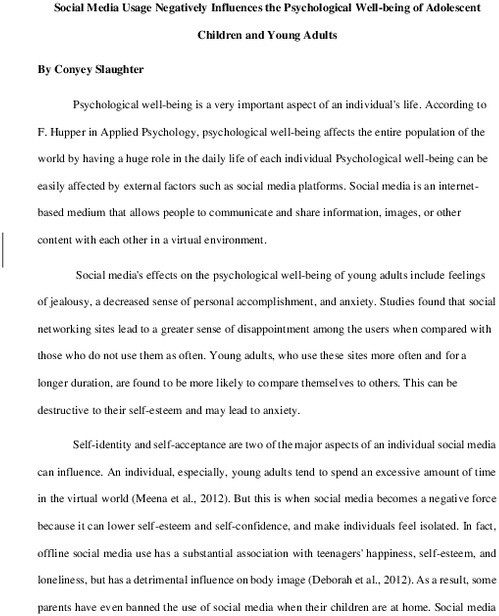 Social media's effects on the psychological well-being of young adults include feelings of jealousy, a decreased sense of personal accomplishment, and anxiety. Studies found that social networking sites lead to a greater sense of disappointment among the users when compared with those who do not use them as often. Young adults, who use these sites more often and for a longer duration, are found to be more likely to compare themselves to others. This can be destructive to their self-esteem and may lead to anxiety.

Self-identity and self-acceptance are two of the major aspects of an individual social media can influence. An individual, especially, young adults tend to spend an excessive amount of time in the virtual world (Meena et al., 2012). But this is when social media becomes a negative force because it can lower self-esteem and self-confidence, and make individuals feel isolated. In fact, offline social media use has a substantial association with teenagers' happiness, self-esteem, and loneliness, but has a detrimental influence on body image (Deborah et al., 2012). As a result, some parents have even banned the use of social media when their children are at home. Social media has helped in strengthen community bonds, friendships, and communications. However, the effects of social media on young adults’ psychological development are always a cause of concern.

In addition, a romantic relationship formed on social media has a negative impact on adolescents’ self-esteem (Bruxvoort et al., 2018). This shows that there is a large possibility that social media used by young adults is creating more problems. Even if teenagers are not getting hurt in these relationships, their self-esteem is negatively affected because of too many people in their virtual environment. The increasing rate of individuals with psychological disorders may be caused by social media. There is a great chance that young adults have emotional instability and depression.

Mental health disorders are becoming more prevalent in young adults due to social media platforms. (Grealish et al., 2020). This is because of the addictive nature of these platforms. For example, social media is an outlet where people may post negative opinions about themselves and others which can lead to feelings of depression. People who frequently open the sites often experience a loss in sense of time and a feeling of disconnection from those around them who are not active on the sites.

When young adults publish upsetting material on social media, it shows that they are suffering from mental health concerns (Berryman et al., 2017). Most of the time, the individual does not want to receive help from others and may even become more upset when confronted with concerns from others. There are many reasons why a user would publish upsetting material on social media that is not an attempt to seek attention. Sometimes they might be in a stressful situation such as divorce or disputes with parents over access to children. These negative effects of social media can be minimized by being aware of the problems that could arise when using social media.
Add Your Comments
Support Independent Media
We are 100% volunteer and depend on your participation to sustain our efforts!