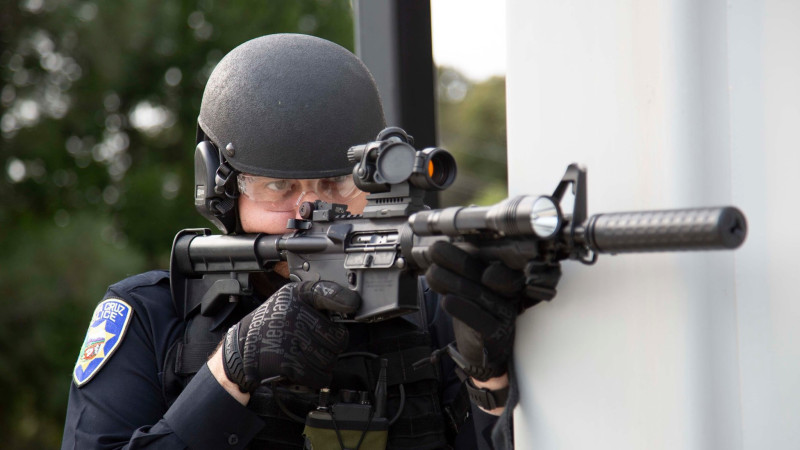 This equipment is a battery powered, remote operated device. It is equipped with a color camera as well as infrared capabilities that allow for use in low or no light situations. It does not have audio capabilities, nor is it capable of creating audio or video recordings. The Throw Bot is designed to be carried and operated by one person and can be thrown a significant distance without damage. It cannot traverse stairs on its own and it does not have any arm, claw or other type of manipulation attachment. The Throw Bot has no ability to have a weapon or other device affixed to it, nor is the Throw Bot capable of delivering a weapon or other device.

The ARV is designed to provide ballistic protection during tactical events, and is designed to withstand multiple bullet strikes from small arms fire and low level explosions. The ARV is equipped with remote operated spotlights, emergency lights, siren and a public address system.

These vehicles can act as a Mobile Command Center. The vehicle is equipped with file cabinets, dry erase board, medical supplies and additional mapping equipment.


Firearms of Greater than .50 caliber

These shotguns are built on a standard Mossberg 590 action. They have a 13.5 inch barrel with a breaching muzzle brake affixed to the end of the barrel.


Firearms of Greater than .50 Caliber

This shotgun was repurposed from an out of service shotgun that SCPD already had in inventory. This shotgun is specifically designed to launch a specific type of chemical munition. Though based on a standard 12 gauge shotgun, it is not designed or capable of firing lethal shotgun rounds. The buttstock and fore-end are bright orange and it is marked as a “Less Lethal” weapon. It has a purpose built launching cup permanently affixed to the muzzle.


Ammunition of .50 caliber or greater

These are blank shotgun cartridges that utilize black powder as the propellant.


Specialized Firearms and ammunition of less than .50 caliber

The department maintains a Precision Rifle team within the ESU Tactical team. These officers are trained in the use of precision rifles that are specifically designed to stop lethal threats at various distances and through barrier mediums that a carbine rifle would not. These rifles are chambered in .308 Winchester. This is a .30 caliber round that is highly accurate and used during potentially lethal encounters. The .308 is capable of defeating soft body armor at greater distances.

Noise, Flash, Diversionary Devices (NFDD) commonly referred to as “flashbangs” are single use devices that emits a loud bang and a very bright flash. They are designed to disorient and distract dangerous subjects by overwhelming their senses and provide a window of time, approximately 6-8 seconds, for officers to take control of dangerous or high-risk situations. Additionally, the SCPD possess “Stinger Grenades.” This device is a rubber ball that contains a small NFDD in addition to 60 .32 caliber rubber balls. When used the grenade separates along its hemisphere and expels the balls while simultaneously giving a loud bang and bright flash.

The SCPD uses chemical agents, commonly referred to as “teargas” as less lethal tools to disperse rioting subjects or on barricaded subjects. The two agents the SCPD uses are CS (2-chlorobenzylidene malononitrile) and OC (Oleoresin Capsicum). CS is an irritating agent and a lachrymator. It irritates the eyes and causes tearing while also irritating the respiratory system causing coughing. OC is an, inflammatory agent. It causes a burning sensation, involuntary closure of the eyes and tightness in the chest.

Pepper ball guns are a compressed air powered launcher, almost identical in manufacture to a common paintball gun. It fires .68 caliber plastic balls that contain an irritant powder. The pepper ball gun can fire pepper balls up to 60 feet and can launch pepper balls farther to saturate an area. Pepper Balls are .68 caliber projectiles. They are a plastic shell that contains an irritant powder that consists of PAVA, a pepper derivative. This powder causes a burning sensation and involuntary eye closure when coupled with the impact of the projectile. It is used for pain compliance and disorientation.

This device is a self-contained, lightweight, battery operated hailer that communicates with great intelligibility up to 600 meters. It emits acoustic sound pressure levels up to 140db. It provides clear unmistakable, intelligible communications and stunning alert tones and can play pre-recorded audio messages, mp3 audio files and live broadcasting via a handheld microphone. It can broadcast tones at a volume that causes discomfort to those who hear the tones. The device provides directional sound capabilities allowing the user to direct the uncomfortable tones at a specific person or group of persons.

The 40mm projectile launcher is a Less Lethal platform. It is not a firearm and is not capable of firing any military grade explosive projectile. It is designed to fire a projectile designed to be used against persons in situations where lethal force is prohibited. It allows officers to use Less Lethal Direct Impact spins stabilized munitions at distances up to 120 feet. The munitions cause pain compliance via blunt force impact.

40mm ammunition meant to be used in 40mm Projectile Launchers described above. SCPD has three impact munitions, the Exact Impact is a less lethal projectile made of a foam rubber often called a “sponge round” with a consistency similar to a sponge. It is fired using smokeless powder and is designed to incapacitate people through pain compliance and impact. It is blue in color and can be fired from ranges between 5’ and 120’. The Direct Impact round is an impact munition that carries a powder payload within the projectile. The payload can be a chemical agent powder or it can contain an inert marking powder. These munitions provide the same less lethal pain compliance/de-escalation/violence mitigation functions as the Exact Impact munitions, with the added benefit of an irritant powder, or the ability to make a riotous subject identifiable for arrest.
Related Categories: Santa Cruz Indymedia | Police State & Prisons
§Santa Cruz Police Department Military Equipment Inventory (Full pdf file)
by Santa Cruz Police News 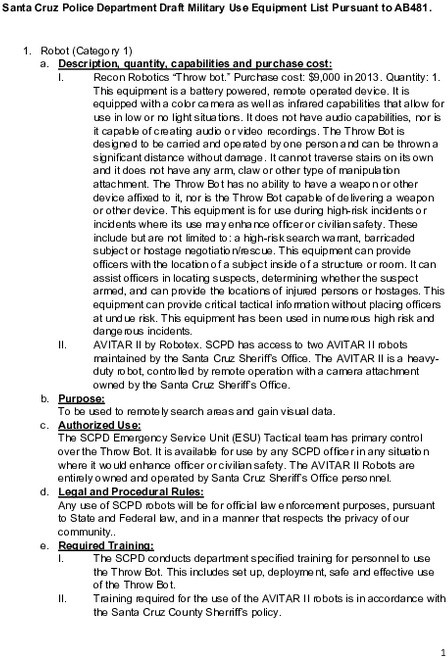 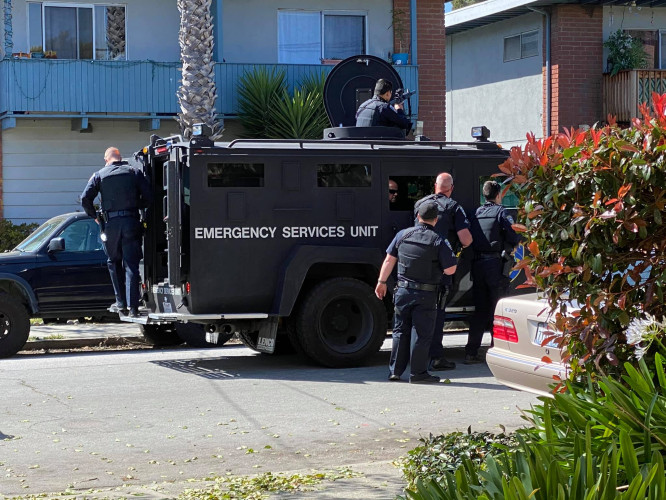 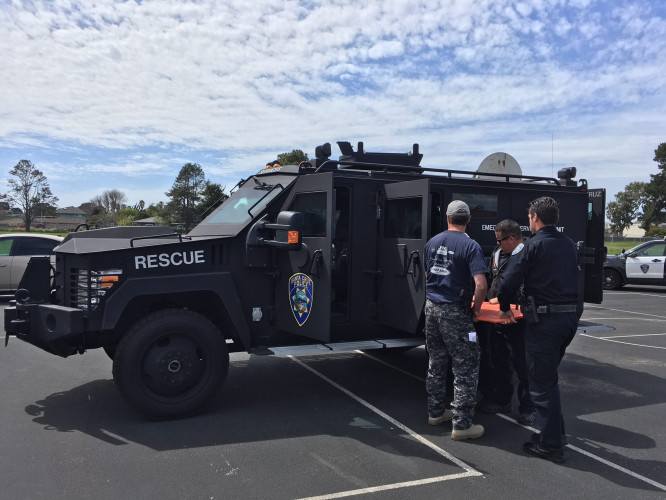 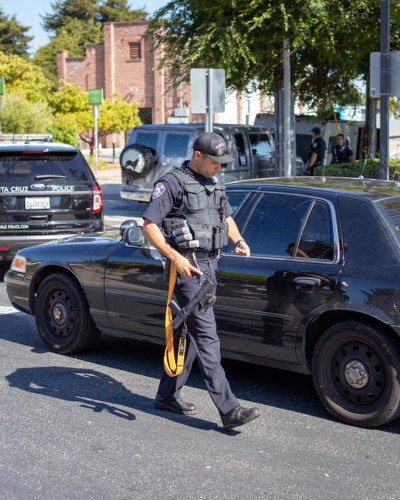 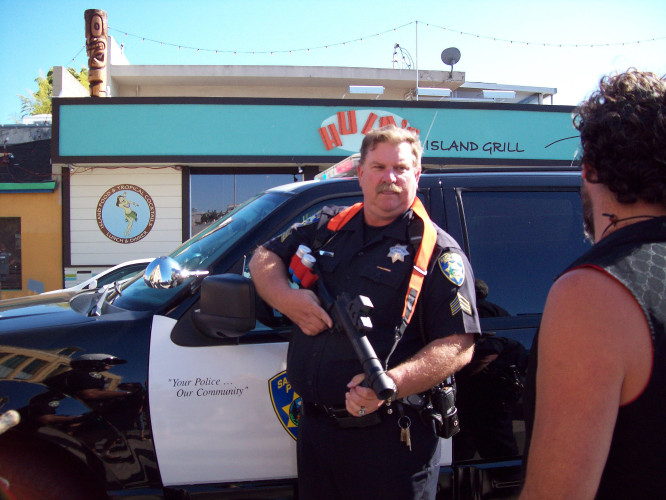 Photo: "Prepared to use Tear-Gas" from Drummers Arrested at Wednesday Farmers Market by Grrr-ant.