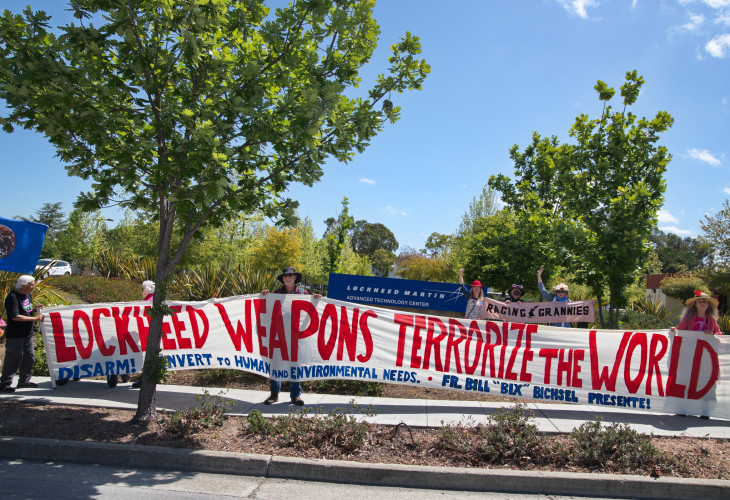 Among the leafy well manicured lawns and fountains of the of campus-like hi-tech labs and offices, you half expect to see professors and students meeting to discuss academe's latest insights into Victorian literature. But the real business there is killing. Massive and, optimally, remote killing. Courtesy our taxpayer dollars.

As the Ukraine war grinds on and Vladimir Putin hands the US the gift of his war crimes, the "defense" industry assumes the posture of all that is good and holy. Companies like Lockheed take in taxpayer billions while the Ukrainians and Russians get to fill the body bags.

Some people see through the farce. On Friday April 15th, in a tax day protest, Code Pink, Women's International League for Peace and Freedom, the Raging Grannies and other peace activists paid a Tax Day visit to the Silicon Valley offices Lockheed Martin, to their "Advanced Technology Center" (for killing).

They gathered at the corner of Page Mill Road and Camino Real and with signs and a gigantic banner that read "Lockheed Weapons Terrorize the World, marched to the Lockeed buildings. A Code Pink member delivered a message to the Company and the Grannies sang well known melodies with new and improved lyrics. A pie showing Lockneed's huge share of the Pentagon's budget was displayed.

From the protest organizers:

Since so much of our taxes go to war and weapons, on "Tax Day" we need to look at Lockheed Martin-- the largest weapons manufacturer on earth, with facilities nearby. LM's thirst for profits has made peace impossible. LM sells killing weapons to countries all over the planet, including to regimes that violate human rights, like the Saudis. LM donates millions to members of Congress who continue to pass gigantic military budgets. Half the federal budget goes to the military, and half of the military budget goes to the war industry, with Lockheed at the top of the list of war profiteers. LM won big in Afghanistan, making 1000% profit on the failed U.S. war and occupation. LM made the 500 pound bomb that killed 40 children in Yemen in 2018. LM is delighted that the war in Ukraine means more weapons sales.

The war industry, led by Lockheed Martin, supplies the military, which is literally killing the planet with their fossil fuel-driven wars and military bases polluting countries around the world. It's time to call out Lockheed for what they are-- merchants of death, war profiteers, terrorists, and the greatest impediment to peace and security on the planet. We are demanding that Lockheed disarm and convert to making things to sustain life, such as clean energy and transportation systems.

We are demanding that Congress stop taking campaign contributions from the war industry and enact the Green New Deal to provide good green jobs for Lockheed employees so they don't have to participate in killing. We aren't going to stand for Lockheed Martin poisoning the earth any longer. Join us. 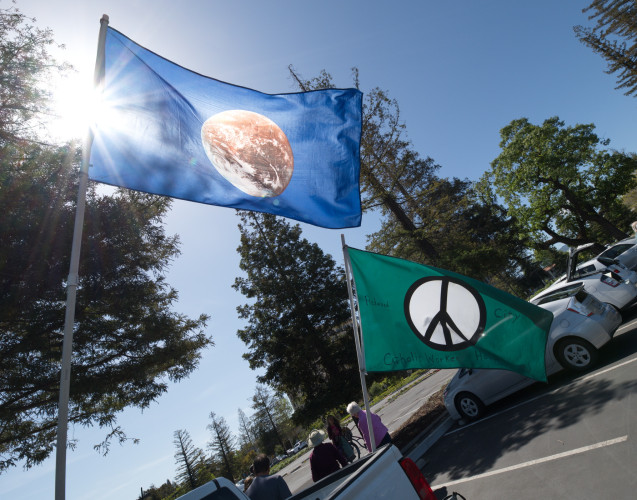 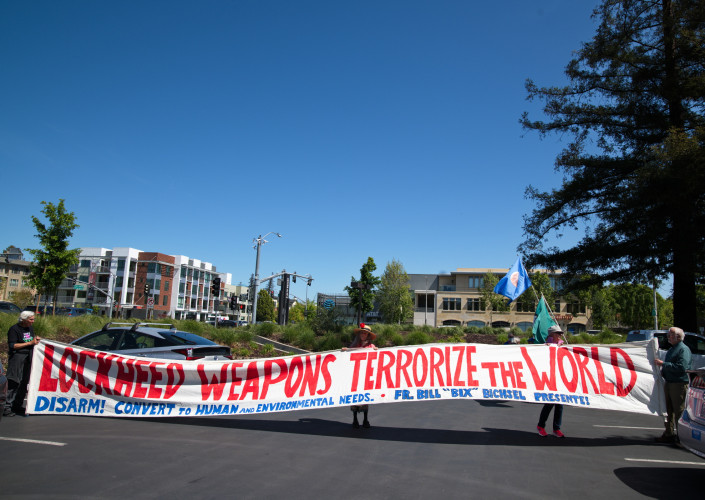 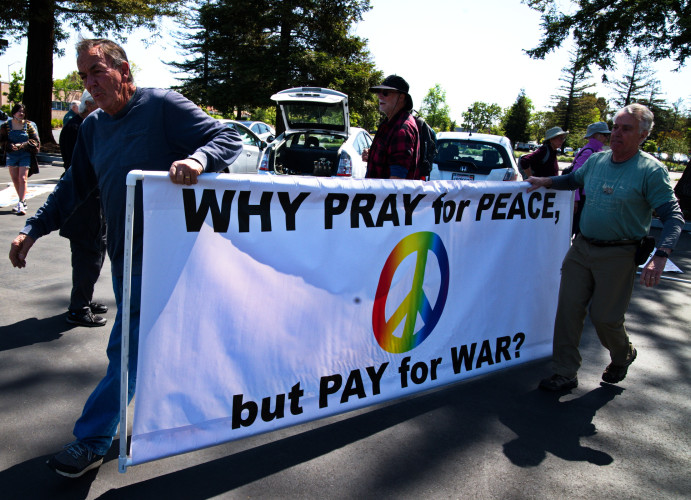 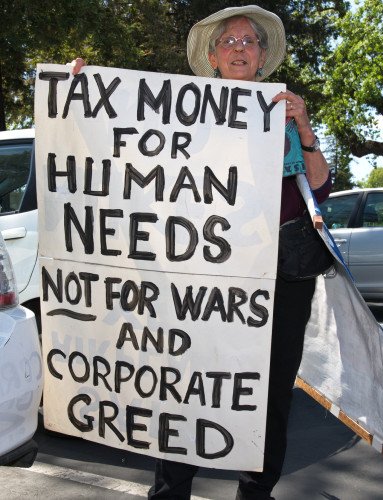 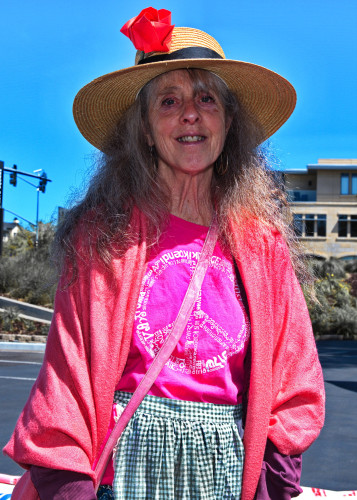 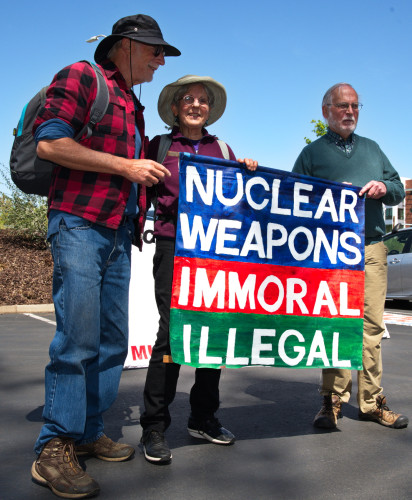 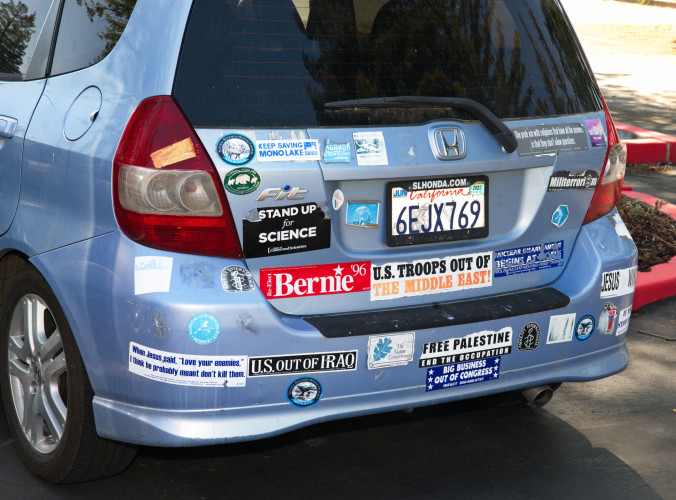 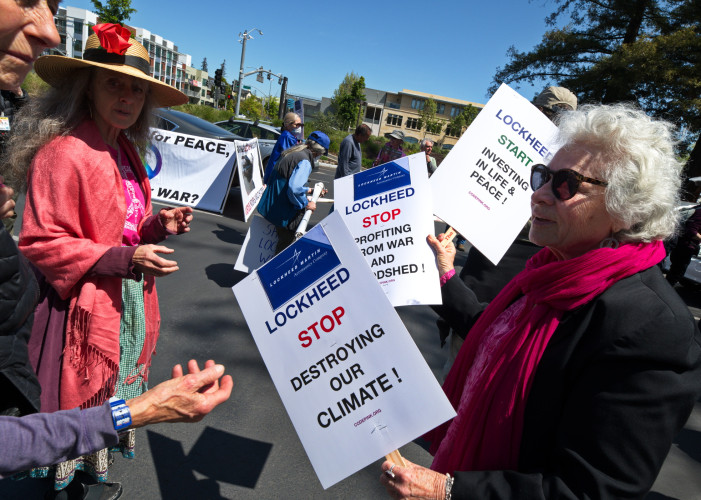 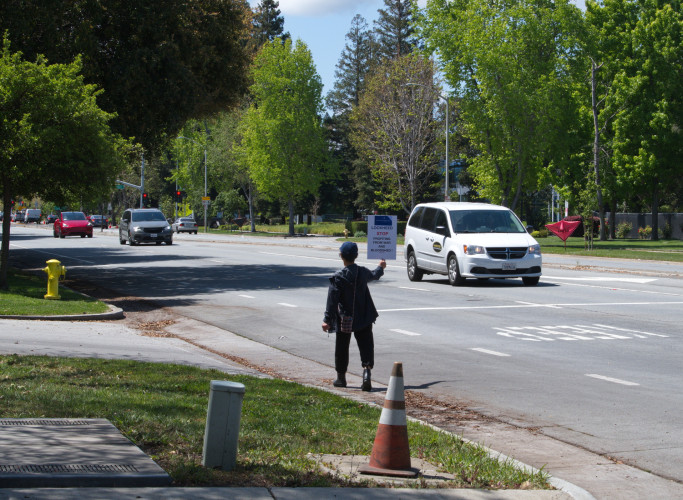 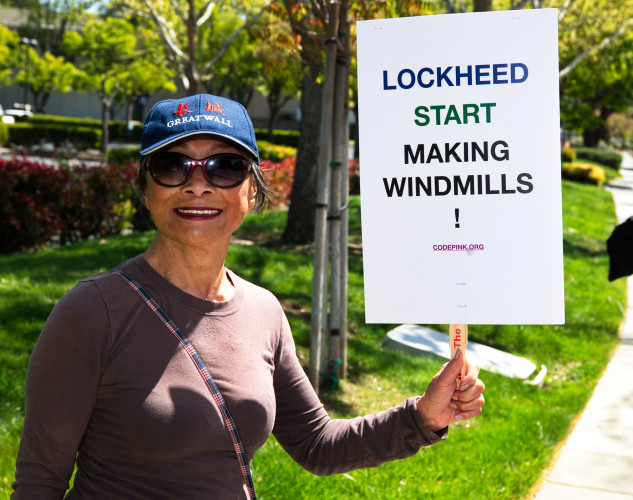 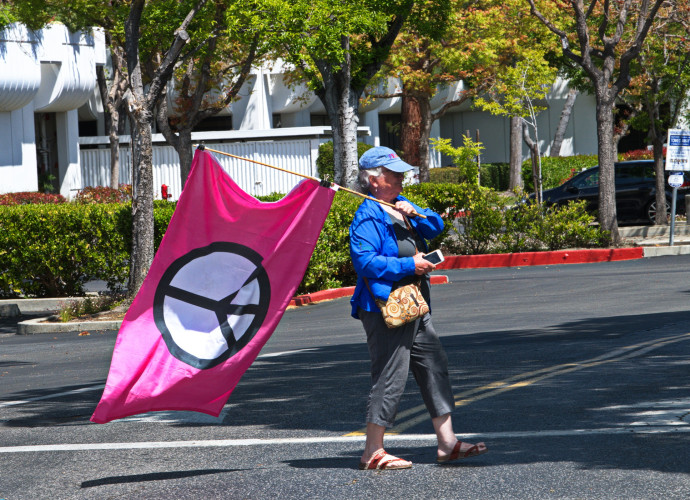 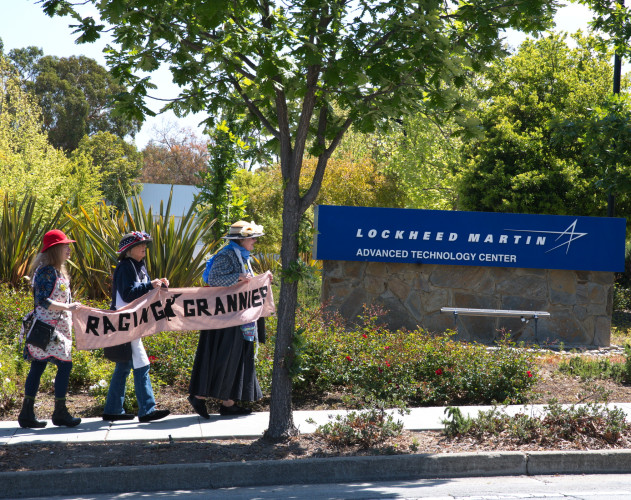 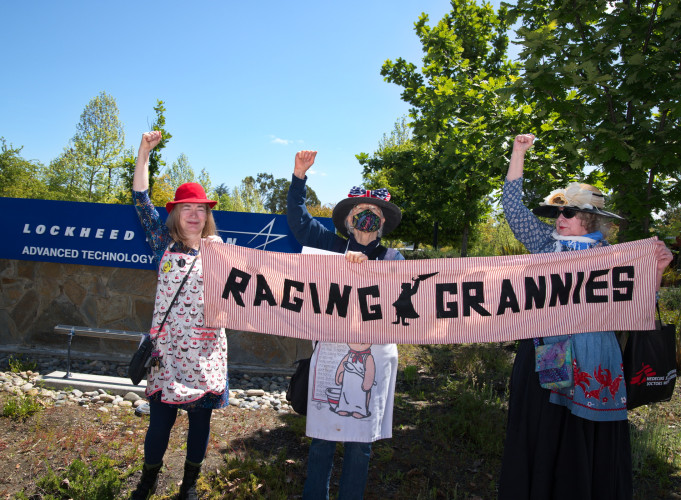 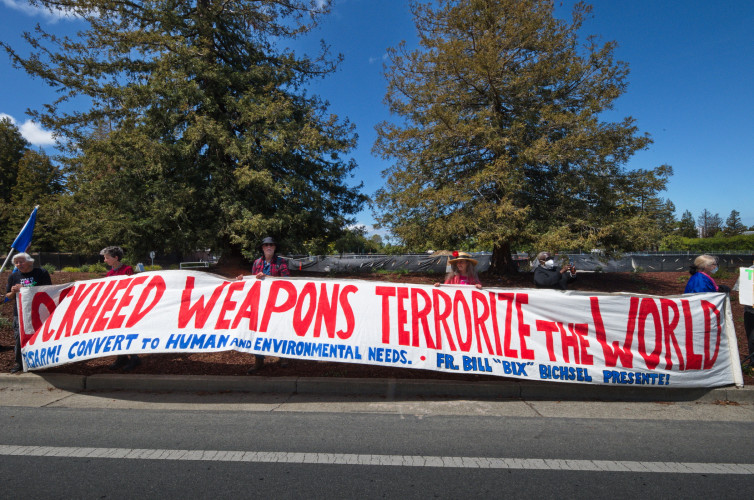 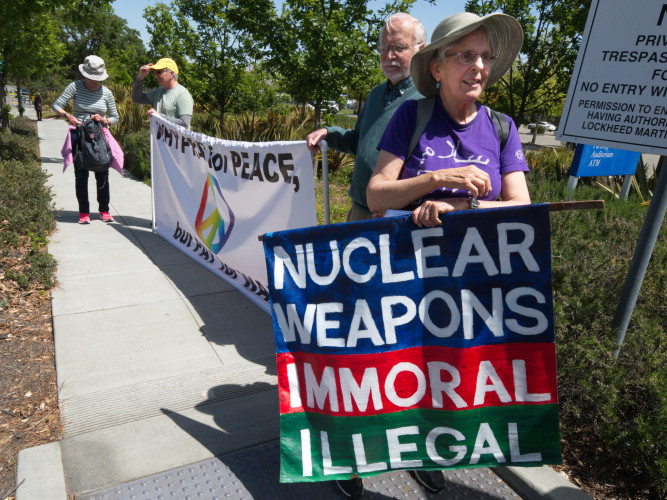 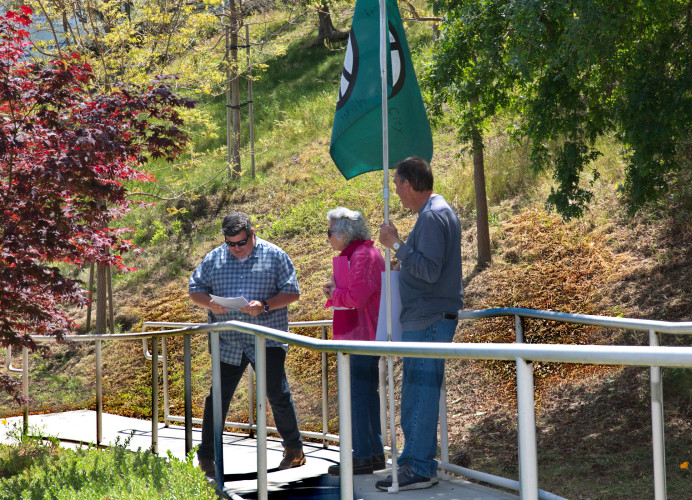 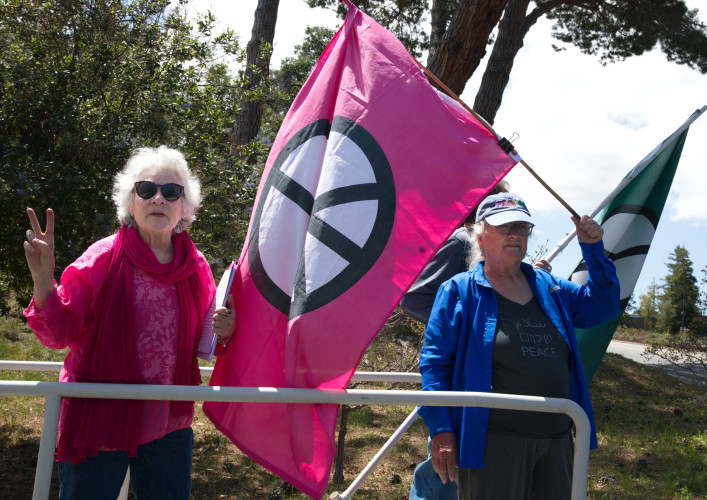 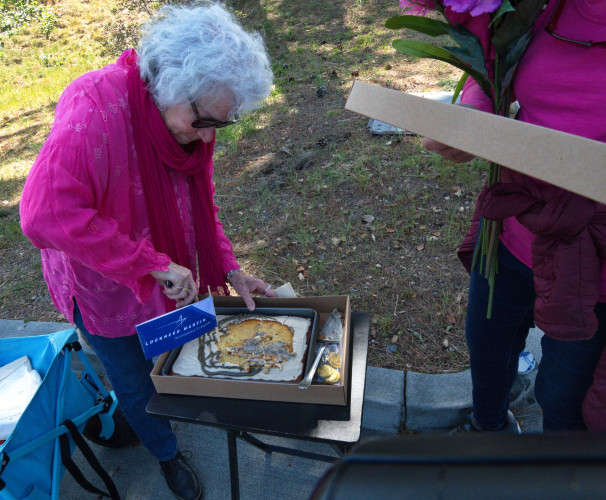 original image (1699x1400)
Add Your Comments
Support Independent Media
We are 100% volunteer and depend on your participation to sustain our efforts!