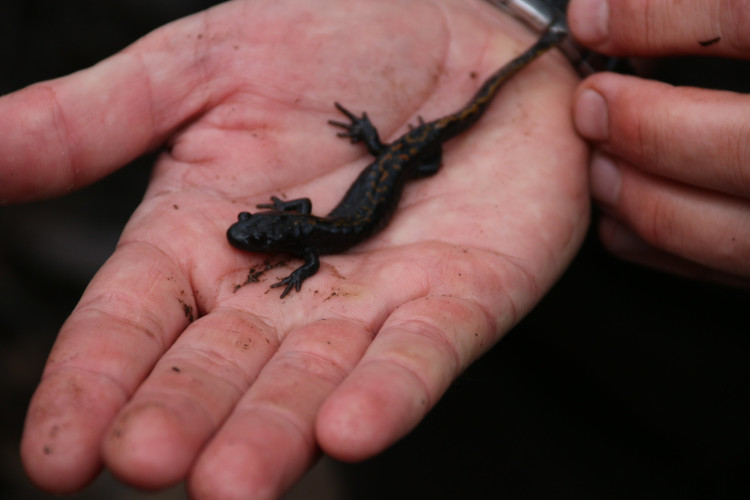 original image (2048x1365)
Over the past year, the Land Trust has collaborated with the US. Fish & Wildlife Service, California Department of Fish & Wildlife, Caltrans Region 5, and the Santa Cruz County Regional Transportation Commission to facilitate the recovery of the long-toed salamander. In January of 2022, the small Trabing Road parcel was listed for sale. "When we heard there was an offer from a developer being considered, our Land Protection Team knew they had to work fast," says Dan Medeiros, Director of Land Protection, "thankfully, we were able to make a competing offer and secure a Purchase and Sale Agreement. We are extremely grateful to our partners at the California Department of Fish and Wildlife, US Department of Fish and Wildlife, Caltrans, and the Santa Cruz County Regional Map identifying Trabing Road parcel as a priority for SCLTS connectivity. Transportation Commission for helping us take action to ensure the survival of this species."

ABOUT THE SANTA CRUZ LONG-TOED SALAMANDER

The Land Trust is dedicated to creating pathways for wildlife throughout Santa Cruz County. Most notably, is the Laurel Curve Undercrossing currently being constructed under Highway 17. The crossing is pivotal to ensuring the genetic health of Santa Cruz County's apex predator, the Santa Cruz Mountain Lion.

One of the most critical needs for the recovery of the species is the creation of a safe crossing for the SCLTS across Highway 1 in Larkin Valley. The Watsonville Slough Ecological Reserve already protected land on the southbound side of Highway 1. The Trabing Road property, located directly across the highway from the reserve, offers the ideal location for both the crossing's entrance and the creation of a long-toed salamander breeding pond.

As of last week, the initial design for the long-toed salamander crossing was completed, and the project recently was issued a project initiation document by Caltrans. 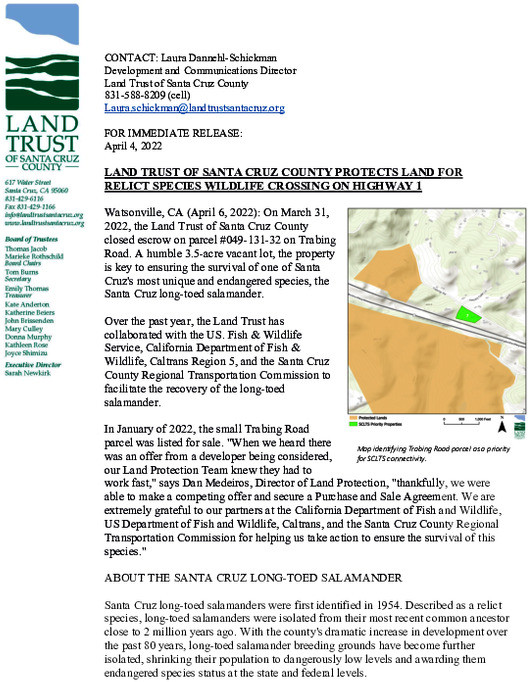 Download PDF (868.5KB)
END_OF_DOCUMENT_TOKEN_TO_BE_REPLACED
Add Your Comments
Support Independent Media
We are 100% volunteer and depend on your participation to sustain our efforts!