Add an Event
Newswire
Calendar
Features
Home
Donate
From the Open-Publishing Calendar
From the Open-Publishing Newswire
Indybay Feature
Related Categories: Central Valley | Racial Justice
Preservation of salient contributions by people of African descent too egregious for some.
by Khubaka, Michael Harris
Thursday Apr 7th, 2022 5:33 PM
Persevere, is the new elevated standard to hold fast upon in the latest round of efforts to erase all authentic record of people of African Descent along today's American River Parkway. If "they" are successful, it will not be for the lack of presenting authentic primary source documentation since the turn of the century. "White Male Only" remains the current methodology, to arrive at the desired "need" and foul process utilized in a cloaked private notion. Spring 2022, a new public process may allow for consideration of the 1840-1875 California Gold Mining region of Negro Hill, Mormon Island and Negro Bar, Sacramento County; officially evaluated by an interagency collaboration within a formal official Federal transparent process, deciding the fate of historic land stewardship managed by California State Parks. 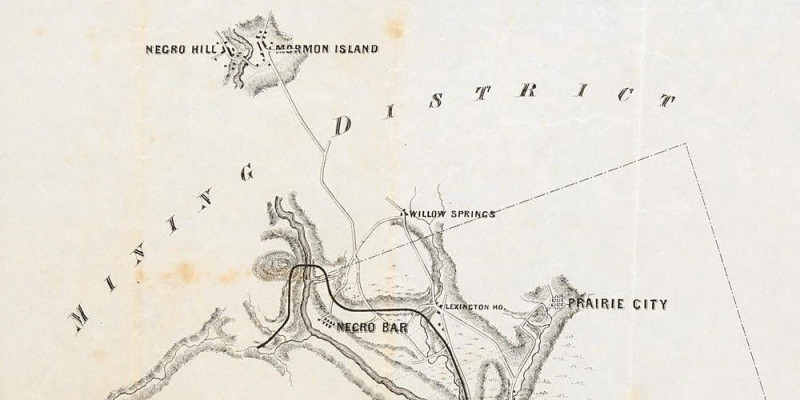 From the 18th century to the mid-20th century, "negro" (later capitalized) was considered the correct and proper term for African Americans. It fell out of favor by the 1970s in the United States.

In current English language usage, "Negro" generally is considered acceptable in a historical context or in the name of older organizations, as in the United Negro College Fund, and is used more commonly by those born before the post-World War II baby boom.

Lyndon B. Johnson was the last American president to publicly refer to the African American population as Negroes (to which, for much of his life, he gave the Texas pronunciation nigras, widely considered an insult by African Americans). Before he left office, he had begun to employ the word Blacks, too. 19th and 20th-century anthropologists used the related word (Negroid) to refer to a race of people from Africa. This ended in the mid-to-late 20th century.

The word has had a similar history in languages such as Italian. Currently in Italy, using the term "negro" to refer to a Black person would be considered a racist insult, suggestive of fascist opinions.

Yet, in Portuguese, the socially accepted term nowadays is "negro" (literally, "black"), while "preto" (meaning, in this context, "black-skinned") usually is seen as a possible insult because of societal color bias. But, today some Portuguese people and Portuguese-speaking Blacks prefer the term preto in opposition to Branco (white), then negro (that also can mean "dirty").

In French, nègre was the word generally used in the 19th century and earlier times to describe Black persons of African origin. It now has heavy colonial undertones, and the word noir (literally, "black") is always used instead, except occasionally when specifically discussing slavery or colonialism, or when nègre is used as slang for ghostwriters.

In Argentina and Cuba, Negro (Negra for females) is a word commonly usually used to refer to friends or people in general and does not have a racist connotation. For example, one may say to a friend, "Oye, negrito. Como estás? Literally, that translates as, "Hey, black man, how are you doing?" Here, "negro" is used in its diminutive form "negrito", as a term of endearment meaning "pal", or "buddy" or "friend." "Negrito" has come to be used to refer to a person of any ethnicity or color, and also can have a sentimental or romantic connotation similar to "sweetheart," or "dear" in English.

(In the Philippines, Negrito was used for a local dark-skinned short people, living in the Negros islands among other places) In other Spanish-speaking South American countries, the word negro can also be employed in a roughly equivalent form, though it is not usually considered to be as widespread as in Argentina or Cuba (except perhaps in a limited regional and/or social context).

In Cuba, Moreno is used for a Black person. In other parts of the Spanish-speaking world, Moreno means just "tanned," brown, or brunette.

In the Post-Soviet states, the word negr (derived from negro) commonly refers to somebody with African ethnic roots.
Because the majority of the population has seen such people only on television or in films, the word negr does not have any negative aftertaste. The direct translation of "black" (chjornyj) refers nowadays to people from the southern regions of the former Soviet Union (Armenia, Azerbaijan, Georgia, etc.) and is considered a racist insult.

The word cvetnoj ("coloured") is also socially unacceptable in most layers of society. The controversy around the word "Negro" has spread to many languages, to a greater or lesser extent, because many have come to perceive the usage of any word similar to "Negro" with respect to black people in any language as a possible form of insult. Internationally, there is no definite consensus.

While some argue that prevailing attitudes in the United States of America (and elsewhere) should not always be taken into account when deciding what words people should use in other languages, others try to avoid using "Negro" or its variants, as they have come to consider that it could be possibly offensive.

Implementing this decision is not always easy, because in some languages the word for "black" is not considered to be a better alternative at all (in Russian chornyi is a name for minorities like Chechens, in Estonian must also mean "dirty", etc.) Other options are "dark-skinned" or "African".

However, many languages presently do not have any widely accepted alternatives for an alternative to "Negro" that is more neutral or positive in its associations. Some Spanish-speaking people have adopted the term "negrito" or even "Azulito" (the diminutive of "Azul", the color blue) instead of "negro" to avoid the insulting connotation of the word in English, especially around English-speaking people who do not know Spanish. A specifically female form of the word negress was sometimes used; but, like another gender-specific word "Jewess", it has all but completely fallen from use. Both are considered racist and sexist.

As with other racial, ethnic, and sexual words that are seen as pejoratives, some individuals have tried "reclaiming" the word.

An example of this is artist Kara Walker. In the US, some African Americans may use the term playfully among themselves (as in "You can't please Negroes"), especially throughout the American South and other areas with a higher percentage of Blacks.

Such usage is similar to that of the word nigga, although it is generally not considered profanity, and is less offensive.
Add Your Comments
Support Independent Media
We are 100% volunteer and depend on your participation to sustain our efforts!