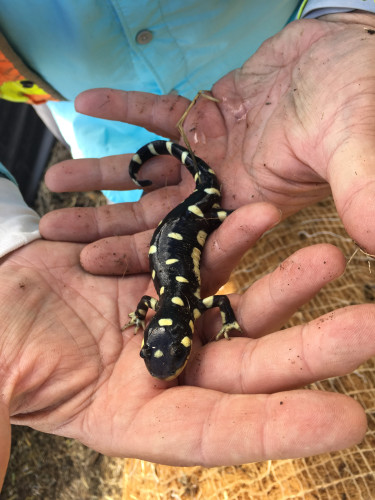 original image (3024x4032)
SANTA MARIA, Calif., April 1, 2022 — The Center for Biological Diversity notified the Santa Maria Airport District this week of its intent to sue over the destruction of hundreds of acres of critical habitat for endangered California tiger salamanders.

In converting airport property in Santa Barbara County to agricultural uses, the district destroyed a breeding pond and upland habitat used by the salamanders, who received federal protection in 2000. Such destruction of sensitive wildlife habitat is illegal under the Endangered Species Act.

Aerial images show that the airport district had destroyed at least 400 acres of habitat and a breeding pond that has been used by California tiger salamanders for nearly two decades. The notice letter this week followed multiple warnings from the U.S. Fish and Wildlife Service to the airport district that these instances of habitat destruction will be forwarded to law enforcement.

“Public agencies like the airport district are supposed to set a good example, not break the law and drive an endangered species closer to extinction,” said Tiffany Yap, DEnv/PhD, a senior scientist at the Center. “California tiger salamanders are very special to the Santa Barbara area, but they’re struggling. If airport officials start conserving instead of decimating wildlife habitat, we might be able to steer these sensitive creatures toward recovery.”

California tiger salamanders are known for their white-and-yellow markings against a black body. They depend on pond habitat for breeding and live most of their lives in underground burrows of upland habitat. In 2009 there were only approximately 60 known breeding ponds for these terrestrial salamanders in Santa Barbara County. Much of the region’s salamander habitat has been lost or severely degraded due to development and agricultural conversion.