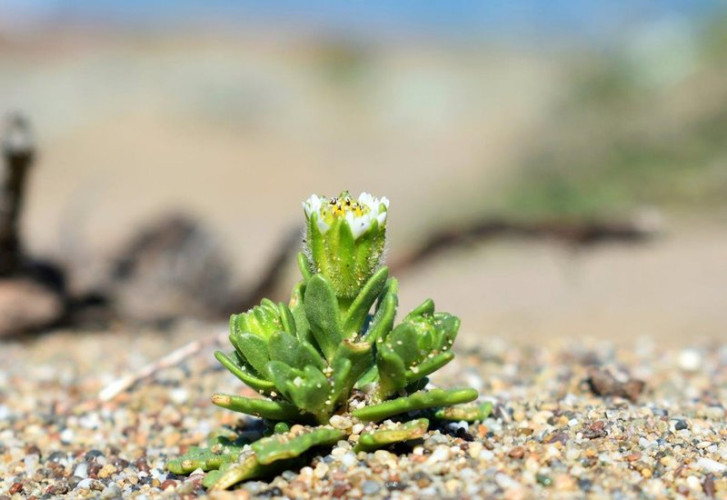 original image (800x550)
“The lovely beach layia has benefited immensely from protection under the Endangered Species Act and is heading toward recovery,” said Jeff Miller, a senior conservation advocate at the Center for Biological Diversity. “Their gorgeous white, yellow and purple flowers now adorn more than 600 acres of our coastal dunes.”

The largest populations of beach layia are found on the North Coast in Humboldt County, where it grows in 13 locations — mostly around Humboldt Bay — and at Point Reyes National Seashore in Marin County. On the Central Coast there are three small populations on Monterey Peninsula, and there is a small South Coast population at Vandenberg Air Force Base in Santa Barbara County.

Beach layia was protected as endangered in 1992 because of damage to dune habitat from human disturbances, particularly from offroad vehicles, agricultural activities, and development. Since a recovery plan was developed for the species in 1998, a significant amount of suitable dune habitat has been protected as preserves and conservation areas. Threats have been reduced, especially by preventing offroad vehicles from driving in the flower’s habitat. Beach layia has responded by increasing in abundance, and there are now nine robust populations of the flowers that each had more than 1 million plants during 2017 surveys.

“The future looks better for beach layia, but its survival isn’t secure yet,” said Miller. “There are still many threats to this flower, and it could benefit from reintroducing plants to former sites where it once thrived to expand its range and resilience.”

An estimated 20% of beach layia occurrences at Point Reyes National Seashore have been subject to cattle grazing, which caused an 84% decline in the flowers’ abundance in the park between 2004 to 2018. Livestock trample layia plants and increase the spread of weeds. The National Park Service has restored dune habitats where layia can thrive but recently approved a plan to continue unsustainable levels of cattle grazing at Point Reyes, over the objections of conservation groups that want to end commercial cattle ranching in the park. The Park Service plan would allow cattle to continue trampling 12% of the layia occurrences at Point Reyes.

“There’s no excuse for allowing any cattle grazing in habitat for beach layia and other endangered plants at Point Reyes National Seashore,” said Miller.