by Khubaka, Michael Harris
The Speaker of the House of Representatives and the President pro tempore of the Senate shall make appropriate arrangements for the presentation, on behalf of Congress, of a gold medal of appropriate design to the African Americans who served with Union forces during the Civil War, collectively, in recognition of their bravery and outstanding service during the Civil War. 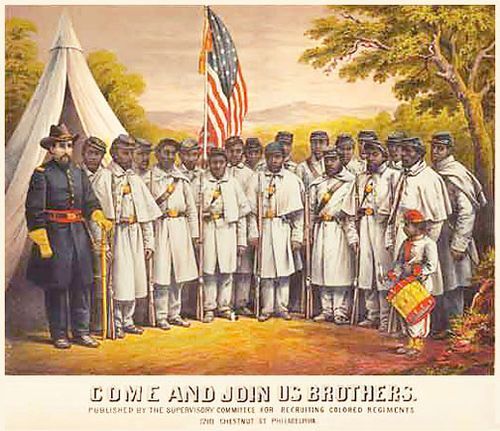 To award a Congressional Gold Medal, collectively, to the African Americans who served with Union forces during the Civil War, in recognition of their bravery and outstanding service.

Mr. Booker introduced the following bill; which was read twice and referred to the Committee on Banking, Housing, and Urban Affairs

A BILL
To award a Congressional Gold Medal, collectively, to the African Americans who served with Union forces during the Civil War, in recognition of their bravery and outstanding service.

Be it enacted by the Senate and House of Representatives of the United States of America in Congress assembled,

This Act may be cited as the “United States Colored Troops Congressional Gold Medal Act”.

(1) Since the colonial era, African Americans have served the United States in times of war.

(3) During the Civil War, African-American women were not allowed to formally enlist as soldiers or sailors, though they served as nurses, cooks, spies, and scouts for the Union Army and the Union Navy.

(4) While African-American men served in the Navy since its establishment, there was resistance to enlisting them to take up arms for the Union Army at the start of the Civil War.

(5) As the Civil War dragged on, President Lincoln broke from the previous policy of his administration and determined that liberating enslaved persons “was a military necessity absolutely essential for the salvation of the Union”.

(6) The Act entitled “An Act to suppress insurrection, to punish treason and rebellion, to seize and confiscate the property of rebels, and for other purposes”, approved July 17, 1862 (commonly known as the “Second Confiscation Act”) (12 Stat. 589; chapter 195) and the Act of July 17, 1862 (commonly known as the “Military Act of 1862”) (12 Stat. 597; chapter 201) were the first official authorizations to employ African Americans in the Union Army.

(7) It was not until January 1, 1863, the effective date of the Emancipation Proclamation issued by President Lincoln, that the Union Army was ordered to receive African-American men.

(9) Leaders such as Frederick Douglass encouraged African Americans to enlist to advance the cause of citizenship. “Once let the black man get upon his person the brass letters, ‘U.S.’, let him get an eagle on his button, and a musket on his shoulder and bullets in his pocket, there is no power on [E]arth that can deny that he has earned the right to citizenship.”, wrote Douglass.

(10) African-American sailors constituted a significant segment of the Union Navy, making up 20 percent of the total enlisted force of the Navy.

(11) Although there were rank restrictions on African Americans in the Navy before the Civil War, this policy changed after the establishment of the USCT, when the Union Navy started to compete with the Union Army for enlistment of African Americans.

(12) Yet, in practice, most African Americans could not advance beyond lowest ranks of “boy” and “landsman.”

(13) African-American soldiers and sailors served with distinction, honor, and bravery amid racial discrimination and adverse circumstances, including the risk of enslavement and torture if captured.

(14) Eighteen members of the USCT and 8 African-American sailors were awarded the Medal of Honor, the highest honor in the United States for bravery in combat.

(15) For generations after the Civil War, the contributions of African Americans in the Civil War were excluded from historical memory.

(16) Public Law No. 102–412 (106 Stat. 2104) authorized the establishment of a memorial on Federal land in the District of Columbia to honor African Americans who served with Union forces during the Civil War.

(17) This memorial, featuring a bronze statue of USCT soldiers, an African-American sailor and family, is surrounded by the Wall of Honor, which lists the names of the members of the USCT.

(18) The African-American Civil War Museum is located in the District of Columbia.

(19) Patriots and heroes who rose in service to a Nation that would not fully recognize them, the African Americans who served the Union during the Civil War deserve our recognition for their contributions to the grant of emancipation and citizenship for nearly 4,000,000 enslaved people and the preservation of the Union.

(a) Presentation Authorized.—The Speaker of the House of Representatives and the President pro tempore of the Senate shall make appropriate arrangements for the presentation, on behalf of Congress, of a gold medal of appropriate design to the African Americans who served with Union forces during the Civil War, collectively, in recognition of their bravery and outstanding service during the Civil War.

(b) Design And Striking.—For the purposes of the award referred to in subsection (a), the Secretary of the Treasury (hereafter in this Act referred to as the “Secretary”) shall strike a gold medal with suitable emblems, devices, and inscriptions, to be determined by the Secretary.

(2) SENSE OF THE CONGRESS.—It is the sense of Congress that the Smithsonian Institution should make the gold medal received under paragraph (1) available for display elsewhere, particularly at appropriate locations associated with the United States Colored Troops.

The Secretary may strike and sell duplicates in bronze of the gold medal struck pursuant to section 3 at a price sufficient to cover the cost thereof, including labor, materials, dies, use of machinery, and overhead expenses.

(a) National Medals.—The medals struck pursuant to this Act are national medals for purposes of chapter 51 of title 31, United States Code.

(b) Numismatic Items.—For purposes of section 5134 of title 31, United States Code, all medals struck under this Act shall be considered to be numismatic items.

SEC. 6. AUTHORITY TO USE FUND AMOUNTS; PROCEEDS OF SALE.

(a) Authority To Use Fund Amounts.—There is authorized to be charged against the United States Mint Public Enterprise Fund such amounts as may be necessary to pay for the cost of the medals struck under this Act.

(b) Proceeds Of Sale.—Amounts received from the sale of duplicate bronze medals under section 4 shall be deposited in the United States Mint Public Enterprise Fund.
Related Categories: Central Valley | U.S. | Racial Justice
Add Your Comments
Support Independent Media
We are 100% volunteer and depend on your participation to sustain our efforts!