by Khubaka, Michael Harris
The Negro Bar Cemetery was originally associated with the Negro Bar Gold Rush Era Mining Town, which is a California State Historical Site. Across Lake Natoma, a newly developed project area set aside within the vast Folsom Lake Recreational Area managed by California State Parks to honor early pioneers of African Descent along today's American River Parkway during the California Gold Rush Era (1840-1875) is under another round of effort to distort, destroy and/or disregard authentic California History. 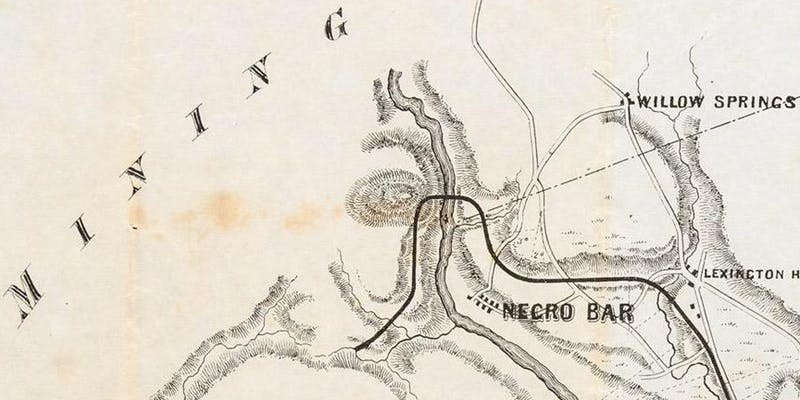 These cemeteries all flow together, and it is difficult to designate where one starts and one finishes.

The Negro Bar Cemetery was originally associated with the Negro Bar Gold Rush Era Mining Town with burials at the cemetery as early as 1846-1849. The original footprint of Negro Bar, which is a California State Historical Site is today used as City of Folsom Corporate Yard, formerly the Folsom City Dump after being used as a key site for the construction of Folsom Dam.

References to the Citizens Cemetery appear in church records and newspaper obituaries until 1942.

In addition there is a Chinese Cemetery separate from the other five and closed to the public due to vandalism. There is also a New Masonic Cemetery (est. about 1924) but there are no markers as to where it is located.

The original Odd Fellows and Masonic Cemeteries were purchased jointly by the Granite Lodge of Odd Fellows and the Natoma Lodge of Masons in 1862, although some sources indicate burials for those lodges were already taking place in these cemeteries as early as 1850.

Huge old California Date Palms surround the Odd Fellows Cemetery and Cedar of Lebanon trees are planted within the Masonic Cemetery as new plans to include a crematory were not approved greater historical tourism and respect for the early pioneers by draw cultural tourism to the region.

US Armed Forces Service Members are buried throughout the cemeteries and the nearby Folsom's VFW Post 6604 hosts a plethora of events honoring all who have served in a good way.
Related Categories: Central Valley | Racial Justice
Add Your Comments
Support Independent Media
We are 100% volunteer and depend on your participation to sustain our efforts!