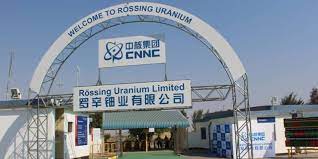 WorkWeek hears from San Francisco UESF on 3/14/22 who had an occupation to the SFUSD to demand their back pay.
Dozens of SFUSD teachers and supporters rallied on 3/14/22 and demanded that they be paid for their work. Hundreds have had paycheck problems which has caused stress and financial danger. Speakers also reported that when the board told Vincent Matthews to cut the budget from the administration he instead cutback the staff in payroll to cause the budget payment crisis.
Harrington and the State Superintendent of Public Instruction Tony Thurmond using the Fiscal Crisis Management & Assistance Team FCMAT is also forcing a layoff of 150 teachers and staff in the middle of a pandemic and with a state budget surplus of $45.7 billion. The Democrats including State Assembly budget chair Phil Ting in San Francisco refuse to appropriate more money to stop the layoffs.
Next Work Week concludes the interview with author and UCSB professor William Robinson on "Global Civil War: Capitalism Post-Pandemic".

‘A cruel austerity agenda is the antithesis of what our students and schools need’
https://www.sfexaminer.com/opinion/do-not-divest-from-direct-student-services-to-balance-s-f-school-budget/

WorkWeek continues to look at the conditions of teachers a the Vallejo charter school Griffin MIT. They are demanding the removal of board members who they accuse of nepotism and corruption.
Next we hear from Edwardo Baptista, an elected union chair of the Mineworkers Union of Namibia Rossing Branch Chair of the
uranium mine. The Chinese state owned company had previously fired 9 union leaders of the mine. The company also accused WorkWeek and this reporter of inaccurately reporting on the dismissal of the 9 union leaders by the CNNC. This further firing is another challenge to the union busting driver of the company to stop the workers from have ay union and labor rights.
The Chinese silk road has meant major capital investments in Africa including the country of Nambia on the West Coast of Africa next to South Africa.
These investments have led to the complete control of the uranium industry by Chinese investors state and private.
At the Rossing mine which was represented by the Mineworkers Union of Namibia MUN, the Chinese National Nuclear Corporation bought the mine in 2019. They promised that they would abide by the labor laws and union contract.
Soon after taking over the mine according the MUN Rossing branch union leaders the company demanded concessions on their healthcare benefits and also began to bring in replacement Chinese workers without going through the contract and legal process.
The union leadership began to fight back and were fired by the company. They are presently fighting to have their arbitration.
After they were fired the workers elected a new union chair Edwardo Baptista. He was also fired by the company for something that had happened at a previous job. We interviewed him and his lawyer Hewat Beukes about this firing. 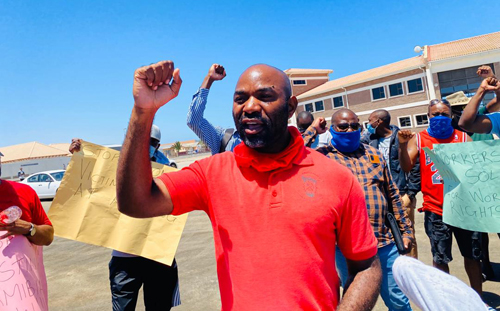 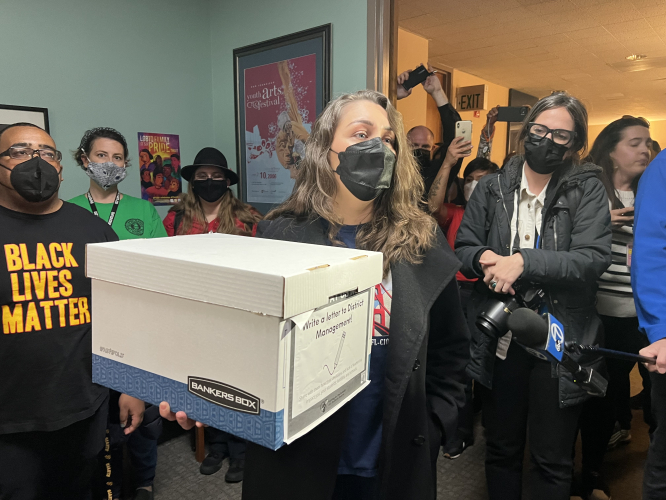 The UESF members are having an occupation and sleep in at the SFUSD administration offices to demand that all their members get back pay.
https://soundcloud.com/workweek-radio/ww-3...
§Vallejo Griffin MIT Charter School Teachers Picket Board
by WorkWeek
Thursday Mar 17th, 2022 10:28 AM 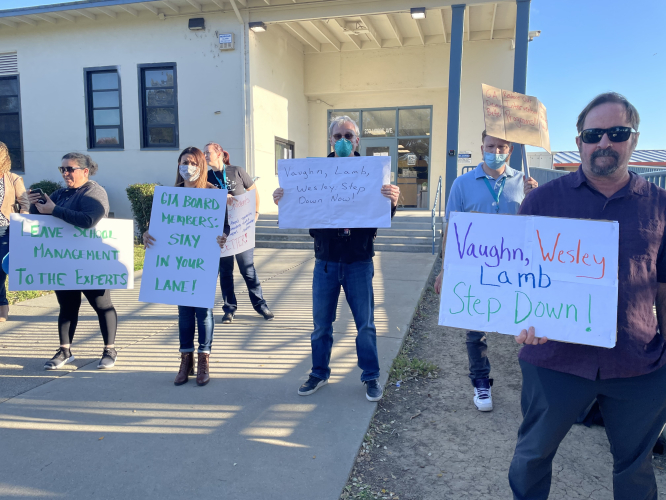 original image (4032x3024)
The teachers at the Vallejo Griffin MIT charter school picketed the board meeting to demand the resignation of two board members who they say have helped destroy the school and allowed dangerous health and safety conditions.
https://soundcloud.com/workweek-radio/ww-3...
Add Your Comments
Support Independent Media
We are 100% volunteer and depend on your participation to sustain our efforts!