by IndyRadio (translation)
"It has been a respectful, cordial and diplomatic meeting. There were the flags of the United States and Venezuela, the flags united looked pretty," Maduro said in an address. A phrase unthinkable until a few days ago. The rapprochement, which raised the possibility of reactivating Venezuela's oil exports to the US, has received multiple negative reactions. 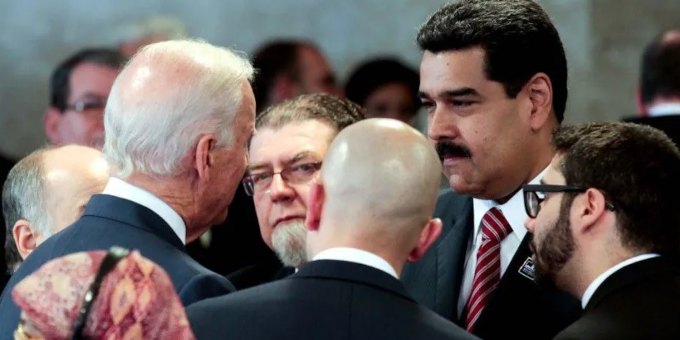 The power of the barrel? After two years with relations frozen, the US and Venezuela are getting closer again thanks to the change in the board left by the invasion of Ukraine.

Two years ago, on March 26, 2020, the United States accused Venezuelan President Nicolás Maduro and 14 members of his inner circle of drug trafficking, narcoterrorism, corruption and money laundering. The complaint was accompanied by a $15 million reward for information leading to the capture and prosecution of the Chavista president, and followed other key decisions such as the recognition of Juan Guaidó as interim president of Venezuelans.

Since then, and in the face of such announcements, few imagined a cordial rapprochement between Washington and Caracas. Until now. On Monday, Maduro himself confirmed contact with the White House, something that had not happened since 2019 when relations broke down. The reason? The invasion of Ukraine and the sanctions applied to Russia, including the ban on oil and gas imports by the United States and the United Kingdom, changed the game.

"It has been a respectful, cordial and diplomatic meeting. There were the flags of the United States and Venezuela, the flags united looked pretty," Maduro said in an address. A phrase unthinkable until a few days ago. The rapprochement, which raised the possibility of reactivating Venezuela's oil exports to the US, has received multiple negative reactions. And, with the background given and in the face of the fervent opposition of the White House to Maduro, it was a surprise that Washington contacted Caracas. U.S. Senator Marco Rubio (R-Fla.) claimed that President Joe Biden was seeking to "replace the oil the United States was buying from a murderous dictator with oil from another murderous dictator," referring to the decision to ban the purchase of Russian oil.

Criticism also came from the Democratic side: Senator Bob Menendez, chairman of the Senate Foreign Relations Committee, suggested that Biden was putting the price of fuel above the struggle of the Venezuelan people. "The democratic aspirations of the Venezuelan people, such as the determination and courage of the people of Ukraine, are worth much more than a few barrels of oil," Menendez said. For Angus Berwick, an investigative reporter for Reuters, "nothing better illustrates the mercenary nature of international relations than the United States exploring a rapprochement with the Maduro government, accused by the UN of crimes against humanity, including systemic killings and torture to secure alternative oil supplies to Russia."

That is, perhaps, the most common thought about these rapprochements: that Biden, desperate to supply his country that has already punished him enough for inflation, is capable of "selling" his ideals at any cost. There are those who criticize the US president that there were other candidates, including his neighbor Canada, who could meet the energy needs of their country. Why approach Venezuela then?

While seeking alternatives for U.S. sourcing is a component of these approaches, there are other key elements to consider. That is, it is not about pure "mercenary nature" and search for an oil alternative. For Arlene B. Tickner, professor of international relations at the Universidad del Rosario, "there is a set of geostrategic and political considerations."

"Biden is targeting several goals at once by approaching Maduro: 1. Replace Russian oil imports with those from Venezuela. 2. Move Maduro away from Putin. 3. Press for a return to dialogues in Mexico. In parallel, it is trying to negotiate the release of the nine U.S. detainees (six from Citgo and three accused of trying to overthrow Maduro)," Tickner said.

See also: Poland offered its fighter jets, how are they and why did the announcement surprise?

The professor asks not to forget that, since assuming the presidency, Biden is seeking to change the strategy towards Venezuela, since that of the diplomatic siege, sanctions and support for Guaidó has already failed. "Hence, we will see at this juncture a convergence of factors that make the approach opportune. The failure of sanctions, diplomatic encirclement and support for Guaidó, not so veiled threats of intervention, invite a change of course in the face of Venezuela, which must necessarily have as its objective the search for a negotiated political transition," he emphasizes.

This is when it must be recognized that Biden did not fall at the feet of Maduro: "the money to which Maduro has access and that largely explains his ability to endure and overcome US sanctions, may be affected by sanctions on Russia." In other words, the Venezuelan president was presented with a great offer. It is hasty to say that the rapprochements with Miraflores will oxygenate the Maduro regime, since US conditions are coming for the dialogues to continue. Both are needed right now.

"To assume that Biden's approach gives Maduro oxygen is to ignore that precisely because of the oxygen he has is that he remains enthroned in power and an incalculable cost for the majority of the Venezuelan population," concludes Tickner. Leaving aside the losers, the winners of such a move could be those who have been seen as pawns on this board: the Venezuelans. We will have to wait how the other key player, Russia, reacts to this advance.

https://www.elespectador.com/mundo/america/el-poder-del-barril-lo-que-esconde-el-coqueteo-de-ee-uu-a-maduro/
END_OF_DOCUMENT_TOKEN_TO_BE_REPLACED
Related Categories: International | Anti-War
Add Your Comments
Support Independent Media
We are 100% volunteer and depend on your participation to sustain our efforts!