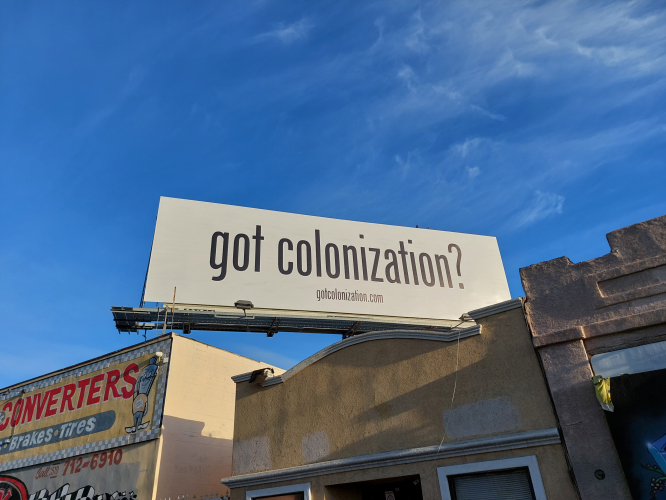 original image (4624x3468)
SAN JOSÉ, CA (March 3, 2021) — This week, Food Empowerment Project (F.E.P.), a vegan food justice organization, launched a billboard campaign to highlight the effect of the dairy industry on animals, human health, the environment, and colonization. The billboards, located in Oakland, Calif., and Madison, Wisc., feature the words “Got Colonization?” and direct consumers to the website GotColonization.com.

Once on the website, consumers can learn about how the dairy industry hurts the environment, animals, and workers, as well as its role in environmental racism and colonization; they can also order free copies of the group’s new eight-page booklet, One Glass at a Time, which is a print version of the website.

Despite the inability of most people to digest the milk of another species—a condition that F.E.P. refers to as “lactose normal” rather than “lactose intolerance”—dairy foods have been forced upon the diets of many cultures through colonization. “Colonization is one of the least understood effects of dairy production,” said Lauren Ornelas, F.E.P.’s founder and president. “European settlers to the ‘New World,’ for example, brought with them lactating animals such as cows and goats, disrupting the primarily plant-based diets of the Indigenous people of North America and often altering or even undoing the breastfeeding relationship between both human and nonhuman females and their babies.”

The effects of dairy production on the environment and animals are becoming better known, although many consumers do not realize the cruelty within cow’s milk. Each cow used for dairy production is repeatedly impregnated through artificial insemination, and her calf—with whom she instinctively forms a strong bond—is taken away soon after birth so that her milk can be sold for human consumption. Cows also suffer such mutilations as tail docking and dehorning, generally without pain killers. After enduring multiple impregnations, births, and forcible separations from her calves, cows used for dairy are killed at about five years old, which is a fraction of their natural lifespan of 20 years or more.

Dairy production also has a significant impact on climate change due to emissions of such greenhouse gases as methane, carbon dioxide, and nitrous oxide and takes a substantial toll on the health of our air, water, and soil. Meanwhile, locating dairies near Black, Brown, and Indigenous communities is a form of environmental racism, which is the disproportionate impact of environmental hazards on people of color.

Workers on dairy farms are affected as well and face numerous health risks; indeed, the industry has one of the highest rates of human injuries and fatalities within agriculture. And as many of them are immigrants, these workers are especially exploitable and vulnerable to abuse by their employers.

Images of both billboards may be downloaded at https://drive.google.com/drive/folders/1A_ZIrOltQqd6zuEWGr2sZnx0GlxoAsWI?usp=sharing

“We hope these billboards inspire people to learn more about how the dairy industry hurts Black and Brown communities as well as animals, the environment, and workers,” added Ornelas. “For people looking to make a real difference, moving away from milk and other dairy products is a great place to start.”

http://GotColonization.com
Add Your Comments
Support Independent Media
We are 100% volunteer and depend on your participation to sustain our efforts!