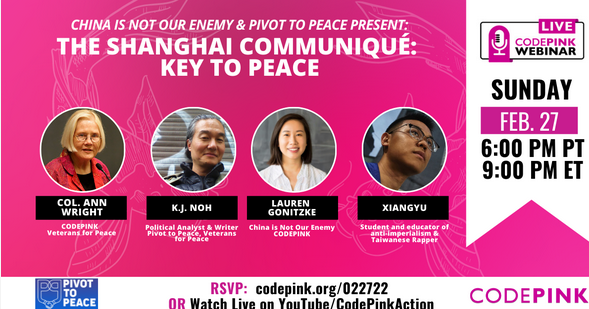 Import event into your personal calendar
Date:
Sunday, February 27, 2022
Time:
6:00 PM - 7:30 PM
Event Type:
Teach-In
Organizer/Author:
CODEPINK and Pivot to Peace
Location Details:
Online event (FREE)
Join Pivot to Peace and the China Is Not Our Enemy campaign for a conversation with Xiangyu, K.J. Noh, Col. Ann Wright, and Lauren Gonitzke from CODEPINK to better understand the Taiwan issue and how the U.S. can avoid war with China over Taiwan.

Xiangyu is a student and educator of anti-imperialism, and a Golden Indie Music Award-nominated Taiwan-based rapper. He co-hosted a Taiwan History Series on Carl Zha's "Silk & Steel" podcast, and has also guest starred on other podcasts such as "Escape From Plan A."

K.J. Noh is a journalist, political analyst, writer and educator specializing in the geopolitics and political economy of the Asia-Pacific region. He is a member of Veterans for Peace and Pivot to Peace.

Ann Wright served 29 years in the U.S. Army/Army Reserves and retired as a Colonel. She was also a U.S. diplomat and served in U.S. embassies in Nicaragua, Grenada, Somalia, Uzbekistan, Kyrgyzstan, Sierra Leone, Micronesia, Afghanistan and Mongolia. She resigned from the U.S. government in 2003 in opposition to President Bush’s war on Iraq.

Lauren Gonitzke is the assistant for CODEPINK's China is Not Our Enemy Campaign. She has worked in various capacities including communications, community building, and education.

END_OF_DOCUMENT_TOKEN_TO_BE_REPLACED
Added to the calendar on Sat, Feb 26, 2022 4:31PM
Add Your Comments
Support Independent Media
We are 100% volunteer and depend on your participation to sustain our efforts!