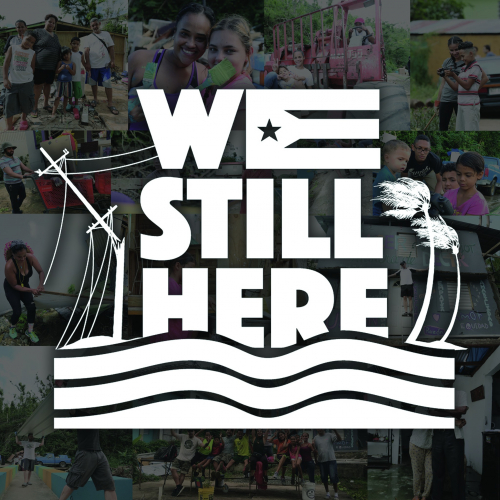 Join this special one-­time screening of a film that explores the mobilization efforts of power and tenacity of youth in mobilizing and rebuilding their community tin Puerto Rico following the unimaginable destruction of Hurricane Maria.

SAN FRANCISCO, CA – February 1, 2022 -- CubaCaribe announces a special community screening of We Still Here / Nos Tenemos, the latest documentary by award winning filmmaker by Eli Jacobs-Fatauzzi in collaboration with Defend Puerto Rico, FistUpTV and Clenched Fist Productions. The screening will be followed by a Q&A with Bay Area filmmakers Eli and Kahlil Jacobs-Fantauzzi along with a dynamic live music and dance performance by Aguacero.

We Still Here introduces the determined youth of Comerío, Puerto Rico navigating the aftermath of Hurricane Maria, a disaster that brought an unprecedented level of devastation. In the lush mountains in the center of Puerto Rico, 24-year-old Mariangelie Ortiz leads a group of young residents who never thought they would become the leaders of their community, nonetheless find themselves traveling to Washington D.C. to protest in the halls of Congress. Follow them in this coming of age story to find their power and begin creating a sustainable future for themselves and their community.

This project is supported in part by Alliance for California Traditional Arts and The Redford Center.
###

ABOUT CUBACARIBE
Co-founded in 2003 by Ramos and visual artist and dancer Jamaica Itule on the principle that dance, music and visual art have the power to unite people of diverse perspectives, CubaCaribe fosters greater understanding and appreciation of Caribbean arts and culture. Since its inception, the organization has become widely known for the diversity and quality of its programming and its deep roots in the Diasporic community under Artistic Director Ramos's leadership.
CubaCaribe projects include: The Annual CubaCaribe Festival of Dance and Music; resident dance company, Alayo Dance Company (featuring Ramos Alayo's innovative fusion of Afro-Cuban modern, folkloric and popular Cuba dance); CubaCamp, offering adult campers an intensive four days of Caribbean dance and music classes; Dance intensive trips to Cuba, Explosión Cubana Una Noche Tropical (Cuban cabaret dinner show) and The Power of Resiliency (virtual series of artist talks, classes, interviews, films, and collaborations in a global pandemic). For more programming information: CubaCaribe.org
Funding for CubaCaribe is provided in part by San Francisco Grants for the Arts, California Arts Council, Walter and Elise Haas Foundation, Alliance for California Traditional Arts, The Rainin Foundation, The Wattis Foundation, The Fleishhacker Foundation, The Zellerbach Family Foundation and The Gerbode Foundation.
ABOUT THE ARTISTS
Eli Jacobs-Fantauzzi is an internationally-recognized and award-winning filmmaker. He is the founder of FistUp.TV, a media platform uplifting and telling stories from underrepresented communities across the world. His work has circulated through National Broadcast: Free Speech TV, Teaching Channel, and PBS. Online he has created content for remezcla, okayafrica, TIDAL, and VIBE. Spike Lee is one of the reasons Eli became a filmmaker, and in
2019 he hired Eli to work on set with him as a photographer for "She's Gotta Have It Too." Eli is the co-founder of Defend Puerto Rico, a multimedia project designed to document and celebrate Puerto Rican creativity, resilience, and resistance. He is currently touring the world with his new film Bakosó: Afrobeats of Cuba and curating his 12th Annual Fist Up Film Festival. His dedication to his craft is deeply connected to his commitment to social justice and the belief in the transformative power of film.
Kahlil Jacobs-Fantauzzi is a producer at Clenched Fist Productions- a media company dedicated to documenting the use of music and culture as a tool for social justice. He has teamed up with his brother Eli Jacobs-Fantauzzi on three award-winning documentary films- We Still Here / Nos Tenemos being the most recent. Kahlil completed his Bachelors Degree in Interdisciplinary Studies from UC Berkeley and a Masters Degree in Education and Technology from the University of San Francisco. His vision is to continue creating media, documentaries, and curriculum that speaks to the lived experiences of the African diaspora.
Aguacero Aguacero is an artistic, educational, and cultural project that focuses on the traditions and creative expressions of Puerto Rican Bomba music and dance. Aguacero literally means a sudden heavy rainstorm usually followed by a refreshing sky clearing and gust of sunshine. The spirit and practice of Bomba, like an aguacero, is intense, healing and promotes life and growth. Through song, music and dance, As a performance ensemble, Aguacero came together in 2006 as a collective of skilled Bay Area dancers, musicians, poets and songwriters practicing, studying, and performing Bomba and other Puerto Rican and Caribbean folkloric traditions. Aguacero carries out its vision to create and share new original works in Bomba and to affirm perspectives and expressions of the genre rooted in the teachings of our masters and ancestors. Aguacero was featured in the 2008 West Wave Dance Festival at the Yerba Buena Center for the Arts in San Francisco and several years at the Cuba Caribe Festival in San Francisco. The collective has performed in numerous other festivals and Universities all over California including the San Jose, Oakland, and Alameda County Puerto Rican Day Festivals, and at UC Berkeley and Humboldt State University. In 2016, Aguacero was featured at the BomPlenazo in New York City. Aguacero has collaborated and performed with Los Pleneros de la 21 and with members of La Familia Cepeda, as well as other renowned masters and practitioners from Puerto Rico. Shefali Shah is the founder and artistic director of Aguacero. Hector Lugo and Roman “Ito” Carrillois are the collective’s musical directors and mentors. Aguacero is available for performances, lecture demonstrations, and educational workshops.
COMPANY WEBSITE: https://www.cubacaribe.org
https://www.cubacaribe.org/upcoming-progra...
§Film still: We Still Here/ Nos Tenemos
by Lucho Ramirez
Friday Feb 18th, 2022 11:04 AM 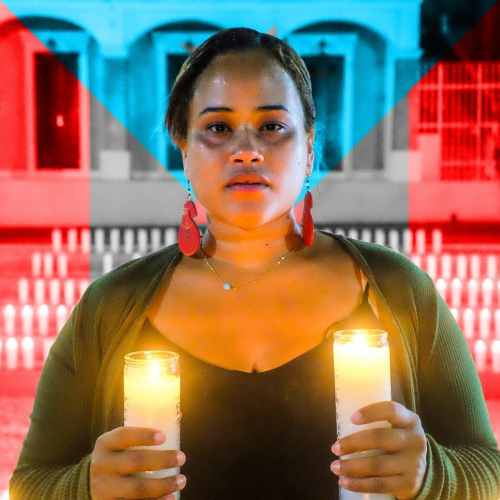 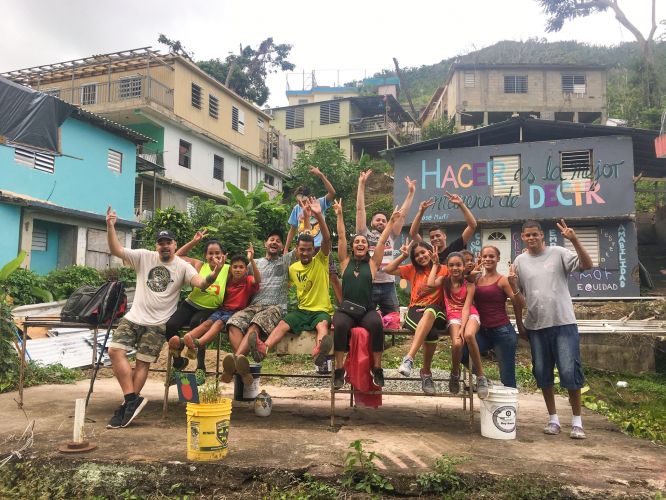 original image (2048x1536)
Film still of vibrant, cheerful young people on a bench in front of their homes.
https://www.cubacaribe.org/upcoming-progra...
Add Your Comments
Support Independent Media
We are 100% volunteer and depend on your participation to sustain our efforts!