Add an Event
Newswire
Calendar
Features
Home
Donate
From the Open-Publishing Calendar
From the Open-Publishing Newswire
Indybay Feature
Related Categories: South Bay | Racial Justice
The path toward an Official California Juneteenth Paid Holiday
by Khubaka, Michael Harris (blackagriculture [at] yahoo.com)
Wednesday Feb 16th, 2022 12:10 AM
The legacy of “Chattel Slavery of people of African Descent” in California may originate in legendary battles with Queen Califia. Spanish Military led by Hernan Cortez, with ships full of Conquistadors including reinforcements of over 300 free and enslaved men of African Descent in 1535 began a new paradigm along western coast of the Pacific Ocean. 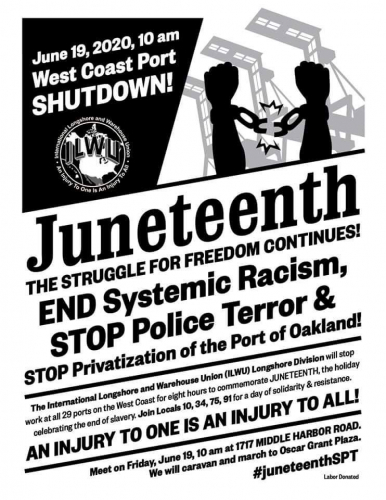 The easiest way to wish someone Happy Juneteenth is by calling, text messaging them and wish them a great fulfilled day of love and joy; no different than other Federal Holidays like Christmas, Thanksgiving, Independence Day or any day you reach out to friends and loved ones.

Juneteenth is our agreed upon date where nationwide leaders met in New Orleans, last century, and began an organized effort towards a National Observance of Juneteenth, June 19, 1865 is the date where the last Confederate Port in Galveston Island, Texas was the site of General Granger beginning the final 7 week campaign and famous island announcement leading to the initial Juneteenth Celebration.

Lula Briggs Galloway and Dr. Ronald V. Meyers were the initial National leaders who brought global Pan African Scholar, Dr. Ivan Van Sertima as keynote speaker to San Jose, California. At a National Juneteenth Conference, before the turn of the century, near the very site of the inaugural California State Legislature in 1849-1850. I was hooked.

Private and Public conversations sealed a lifelong commitment to honoring the legacy of those early pioneers, leaders and United States Colored Troops who paid the price for the freedom we all enjoy today.

From sea to shinning sea, in 6 U.S. territories and far beyond… the seeds of the Trans-Atlantic Trade of Human Cargo stretch back to Papal Edicts of 1442 in my research of the primary source documents.

The legacy of “Chattel Slavery of people of African Descent” in California may originate in legendary battles with Queen Califia. Spanish Military led by Hernan Cortez, with ships full of Conquistadors including reinforcements of over 300 free and enslaved men of African Descent in 1535 began a new paradigm along western coastline of the Pacific Ocean.

The path towards freedom is long and very convoluted journey on the path to 1865 at the close of the US Civil War.
The long and hard-fought victory of a Federal Juneteenth Holiday marks a new beginning as the true history of Juneteenth unfolds.

Sadly, many choose to believe our National Juneteenth Holiday was a “gift” as a token of appreciation for stopping global Black Lives Matter rallies and protests in the aftermath of the George Floyd murder and subsequent trial verdicts.
Nothing new the clinical term that may apply is xenophilia.

The same energy and support can be channeled into essential support for Education and Advocacy for a California paid Juneteenth Holiday enacted by the State Legislature with the Governor Newsom’s signature that will hold special specific significance throughout America and beyond.

The best way to sincerely wish someone a ‘Happy Juneteenth!’ a holiday celebration dedicated to recognizing justice and freedom for all Americas with special consideration for the unique journey people of African Descent who endured the notion of “previous condition of servitude” is to mean it.

It symbolizes freedom and the beginning toward justice for being stripped of language, culture, identity and the sense of ancestral home, many have no idea why they are wounded.

People of African Descent and Indigenous Nations who were dark skinned were initially prisoners of war and later breed like animals for a lifetime of productive utility as 3/5th of a human being for somebody else economic gain, not that long ago.

Your letter of support, organizational signature of support on official letterhead and financial contributions will help us to educate and advocate for Juneteenth to be recognized as a paid official State Holiday throughout the Great State of California.