by Robert Norse
Rhonda Reyna accused the SCPD of abusive violence & kidnapping against a minor last summer. City Administrator/Clerk Bonnie Bush refused to post the full text of this Claim on the twice-monthly Santa Cruz City Council agenda for its 2-4 meeting, leaving the community in the dark before the upcoming Council meeting. But then, this may have been the whole point.
WHY BOTHER TO VIEW OR ADDRESS SANTA CRUZ CITY COUNCIL IN THE FIRST PLACE?
I've always felt conflicted about recommending people waste their time addressing the Santa Cruz City Council. It has systematically cut back public speaking time, purged dissident voices, insisted on banning public meetings, and pretty reliably ratified the staff's agenda.

On issues of police abuse, homeless civil rights, and government reform, I have come to see what Frederick Douglass pointed out over 150 years ago, that power only responds to power. Begging, pleading, making rational arguments, amassing evidence, is generally futile. We can see this by examining the history of protests from many sides of the political spectrum--from the Civil Rights movement to Black Lives Matter protests to the recent Canada Convoy.

In Santa Cruz, with only rare exceptions and for brief periods of time, City Council has forbidden direct community questioning of the staff and City Manager. While Council enforces absurdly strict time limits on the public, staff and Council blather on for hours with the community left to listen distantly--if they bother to listen at all.


MORE REGULAR ABUSES
The Council has now regularly placed the small Oral Communications period at an uncertain time at the end of the afternoon agenda. They have backed up the Mayor's censorship power, requiring those who want to speak due so for two minutes or less (when it's not shrunken to one minute).

Group speaking time when it is granted, is arbitrarily doled out in far more limited bits (3 minutes rather than the historic 5 minutes) and requires you contact the Mayor two days in advance.


CITY CLERK'S REGULAR CENSORSHIP OF CLAIMS
In other document requests, Bonnie Bush is an amiable and regular helper. However not so with Claims made to be examined on the Closed Session and then voted on (and hence open to Public Comment) in the Consent Agenda section of the Closed Session

For years, Bush and her predecessor Bren Lehr have refused to publish the full text of claims made against the City. Even when those claims are up for examination at the Closed Session of City Council.

City Council must allow the public to make comments on that agenda in an interval before the Session locks out the public and goes into its "Closed" session.

Why exclude the public from that secret session? Why gag Council members from discussing with the public what's happened in that locked room? The excuse is usually "litigation and personnel matters"---as though these issues don't concern the public funding the whole operation.

The only alternative--which I regularly use--is to formally make a Public Records Act request to Bush after the agenda comes out (usually on Thursday night before the Tuesday meeting).
Bush requires this be done repeatedly for each separate agenda. My request that I want any claims on the Agenda to be discussed on a Closed Session be regularly e-mailed to me=-as staff does with other regularly scheduled meetings.
She has refused.

Councilmember Sandy Brown, arguably the most liberal Councilperson, has promised to request in writing that this policy be changed, but to my knowledge she has repeatedly failed to do this.


ALTERNATIVES TO INACTION
Even when there is a mass of speakers, speakers are cut short. On an important issue where the call-in’s were overwhelmingly in favor of shifting funding away from police intensification to community services, the Council paid no attention.

Yet when the fences were directly removed (three times) by peaceful but militant demonstrators at night, the fences around the post office sidewalk and town clock stayed down. It was direct action that “got the goods”.

It’s easy to get caught up in the mythology of government structure being some kind of functional if not ideal assertion of human rights and local democracy. It is nothing of the kind. Hence, we got lost in the minutiae seeking “reform” rather than fundamental change.

RHONDA REYNA AND HER DAUGHTER BROOKE
This weekend I distributed a flyer--a modified version of an audio comment I made to City Council right before they went into their Closed Session. The flyer is pretty self-explanatory, though I modified it to clarify how it also related to City Council’s lowest priority status for homeless rights and services.

Rhonda Reyna was unable to find an attorney willing to press her case. She also struck me as someone who is not particularly wealthy. Her sister-in-law, Liani Reyna, described herself as a retired police sergeant, and wrote a formal complaint to the Internal Affairs ("Professional Standards") department of the SCPD. After half a year, she and Rhonda have reportedly received no response.

I was able through an unnecessarily delayed formal Public Records Act to get City Administrator/Clerk Bonnie Bush to release the full unredacted version of Rhonda Reyna's Claim form, which I also attach. I also attach Rhonda Reyna's formal claim (which was censored from the on-line agenda) and Liani Reyna's complaint to Internal Affairs.

The individual directly responsible for the censorship of the complete claims--which City Council gets to see in Closed Session, but we don't unless we make special application for them.

For those whose hope is eternal, you can e-mail your concerns to citycouncil [at] cityofsantacruz.com or directly to bbush [at] cityofsantacruz.com. Others who have legal skills might want to take the matter directly to court. But for those without wealth or innocence, I believe it will require a lot of noise and persistence to get the well-buffered oblivious deaf-to-reason Council and staff to respond.

§Standard Claim Form Filled Out by Rhonda Reyna
by Reyna (posted by Norse) (rnorse3 [at] hotmail.com) 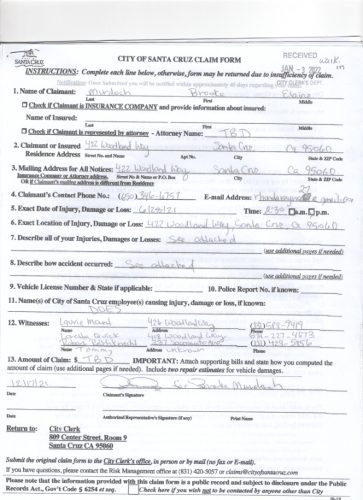 original image (850x1170)
This claim form, filled out a month ago, details contact information for the claimant. It's necessary to know this if you wish to contact her as a reporter, a sympathetic community member, or someone concerned about police abuse. That information is not available in the regular on-line or printed agenda and requires a formal Public Records Act demand.
END_OF_DOCUMENT_TOKEN_TO_BE_REPLACED
§Rhonda Reyna's Account of the Incident
by Reyna (posted by Norse) (rnorse3 [at] hotmail.com) 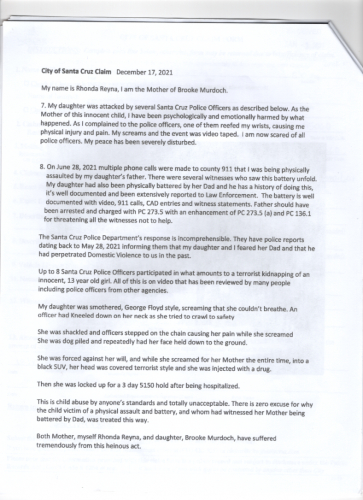 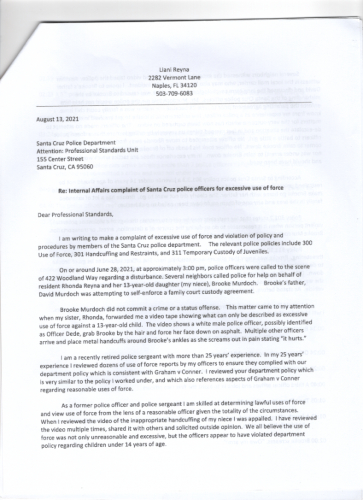 original image (850x1170)
A complaint to the Internal Affairs (Professional Standards) unit of the SCPD by Brooke Murdoch's aunt, Liani Reyna, who describes herself as a retired police sergeant.
END_OF_DOCUMENT_TOKEN_TO_BE_REPLACED
§Formal Complaint to the SCPD (page 2)
by Liani Reyna (posted by Norse) (rnorse3 [at] hotmail.com) 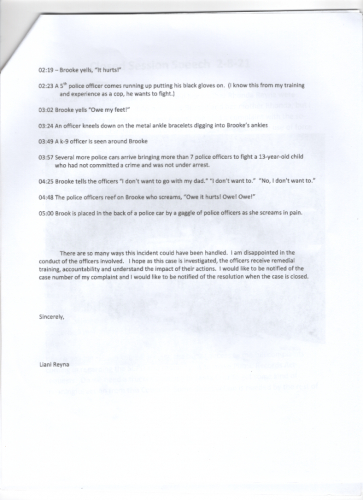 original image (850x1170)
For those interested in assisting in securing justice in this case, call me at 831-423-4833. I'll forward your contact information to Rhonda Reyna, who is seeking help and support.
END_OF_DOCUMENT_TOKEN_TO_BE_REPLACED
Add Your Comments
Support Independent Media
We are 100% volunteer and depend on your participation to sustain our efforts!