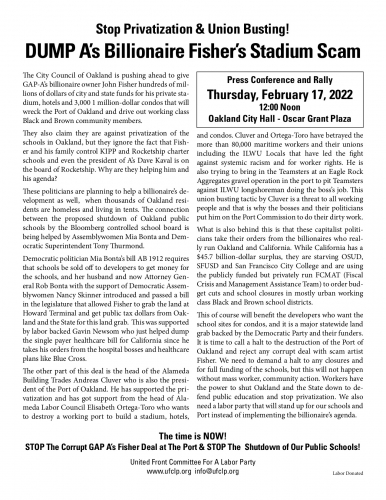 
The City Council of Oakland is pushing ahead to give GAP-A’s billionaire owner John Fisher hundreds of millions of dollars of city and state funds for his private stadium, hotels and 3,000 1 million-dollar condos that will wreck the Port of Oakland and drive out working class Black and Brown community members.

The same City Council members also claim they are against privatization of the schools in Oakland, but they ignore the fact that Fisher and his family control KIPP and Rocketship charter schools and even the president of A’s Dave Kaval is on the board of Rocketship. Why are they helping him and his agenda?

These politicians are planning to help a billionaire’s
development as well, when thousands of Oakland residents are homeless and living in tents. The connection between the proposed shutdown of Oakland public schools by the Bloomberg controlled school board is being helped by Assemblywomen Mia Bonta and Democratic Superintendent Tony Thurmond who rejected a request by the Oakland School Board to reject the FCMAT letter ordering cuts.

Democratic politician Mia Bonta’s bill AB 1912
requires that schools be sold off to developers to get money for the schools, and her husband and now Attorney General Rob Bonta with the support of Democratic Assemblywomen Nancy Skinner introduced and passed a bill in the legislature that allowed Fisher to grab the land at Howard Terminal and get public tax dollars from Oak-land and the State for this land grab.
Mia Bonta's School Bill
https://leginfo.legislature.ca.gov/faces/billTextClient.xhtml?bill_id=202120220AB1912
This was supported by labor backed Gavin Newsom who just helped dump the single payer healthcare bill for California since he takes his orders from the Hospital bosses and Healthcare plans like Blue Cross.

The other part of this deal is the head of the Alameda Building Trades Andreas Cluver who is also the president of the Port of Oakland. He has supported the privatization and has got support from the head of Alameda Labor Council Elisabeth Ortega-Toro who wants to destroy a working port to build a stadium, hotels, and condos. Cluver and Ortega-Toro have betrayed the more than 80,000 maritime workers and their unions including the ILWU Locals that have led the fight against systemic racism and for worker rights.
He is also trying to bring in the Teamsters at an Eagle Rock Aggregates gravel operation in the port to pit Teamsters against ILWU longshoreman doing the boss’s job. This union busting tactic by Cluver is a threat to all working people and that is why the bosses and their politicians put him on the Port Commission to do their dirty work.

What is also behind this is that these capitalist politicians take their orders from the billionaires who really run Oakland and California. While California has a $45.7 billion-dollar surplus, they are starving OSUD, SFUSD and San Francisco City College and are using the publicly funded but privately run FCMAT (Fiscal Crisis and Management Assistance Team) to order budget cuts and school closures in mostly urban working class Black and Brown school districts.

This of course will benefit the developers who want the school sites for condos, and it is a major statewide land grab backed by the Democratic Party and their funders. It is time to call a halt to the destruction of the Port of Oakland and reject any corrupt deal with scam artist Fisher.
We need to demand a halt to any closures and for full funding of the schools, but this will not happen without mass worker, community action. Workers have the power to shut Oakland and the State down to defend public education and stop privatization.
We also need a labor party that will stand up for our schools and Port instead of implementing the billionaire’s agenda.

The time is NOW!
STOP The Corrupt GAP A’s Fisher Deal at The Port & STOP The Shutdown of Our Public Schools! 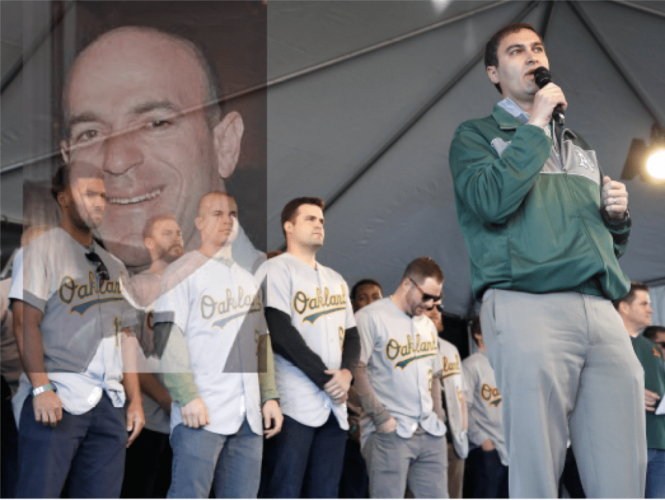 original image (1023x769)
John Fisher and his family not only want to destroy the Port of Oakland for a stadium, hotels and 3,000 luxury condos but his A's president Dave Kaval is on the union busting Rocketship charter school operation.
END_OF_DOCUMENT_TOKEN_TO_BE_REPLACED
§Rob Bonta Pushed State Bill To Grab Port For Fisher & Give Him Many Millions Of Tax Dollar
by United Front For A Labor Party 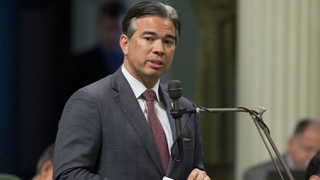 Democratic Attorney General Rob Bonta and his wife Mia Bonta have done the bidding of billionaire Fisher's land grabs of school land and port property.
END_OF_DOCUMENT_TOKEN_TO_BE_REPLACED
Add Your Comments
Latest Comments
Listed below are the latest comments about this post.
These comments are submitted anonymously by website visitors.
TITLE
AUTHOR
DATE
John Fisher the Bohemian Club member
Peter Tscherneff
Red, Black & Brown (OHLONE Land & Indigenous People)
Zachary RunningWolf
Support Independent Media
We are 100% volunteer and depend on your participation to sustain our efforts!