Add an Event
Newswire
Calendar
Features
Home
Donate
From the Open-Publishing Calendar
From the Open-Publishing Newswire
Indybay Feature
Related Categories: U.S. | Health, Housing & Public Services | Racial Justice
Run for the Ancestors: Phoenix to Oak Flat: Hohokam Graves Being Recklessly Excavated
by Marina Thomas Running Deer, Akimel O'odham
Monday Feb 14th, 2022 8:56 AM
Hundreds of Hohokam graves are being recklessly excavated for a housing project in Phoenix. Join O'odham and Run for the Ancestors, from the Phoenix site to the east, to the Apache Stronghold at Oak Flat, defending Apache Ceremonial Ground from copper mining in central Arizona. 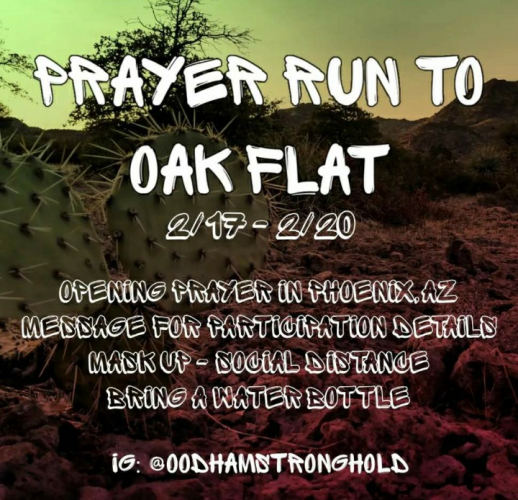 original image (720x694)
Run for the Ancestors. Run for the Stronghold.

Last year for Apache Stronghold’s 7th Annual March to Oak Flat, as a result of the increase in tribal support across Arizona, it came to Vanessa Nosie that the prayer to Oak Flat should come in from all four directions.

We ran in from the West, nearly 90 miles from the Salt and Gila River confluence -- a colorful group of both indigenous and non-indigenous peoples, coming together to pray for the protection of the land and water.

On March 1, 2021, the day after the closing ceremony, the Biden Administration had rescinded the Final Environmental Impact Statement (FEIS), blocking a land transfer from the US Forest Service to Resolution Copper, temporarily halting the mining project.

Just days after the relieving news, one of the runners, whom I’d never met prior, reached out to notify me of the discovery of human remains that were being excavated in a current construction zone in her neighborhood.

I’d go on to research about the excavation, learning that the City of Phoenix began excavating an ancient city that archeologists refer to as LA CIUDAD, clearing ground for a new “holistic” living community.

In the process of this excavation, hundreds of Hohokam remains were being unearthed along with the homes, tools, and other remnants of what true holistic living looked like in the Sonoran Desert.

While we, the descendants of these ancestors, learned of the excavation and reached out to the city to halt the project, we were ignored and the project moved forward.

As of today, over one thousand remains have been removed and more excavation is required for the continued development for the upcoming Edison Eastlake Community.

This year, the run to Oak Flat from the West will start at the desecration site of our ancestors in Phoenix.

As part of Resolution Copper’s mining project, it is planned that the waste tailing site to hold over 1.3 billion tons of toxic waste will be contained within the mountain's tributaries -- where our ancestors also rest. It is our responsibility, as descendants of these incredible human beings who lived and worked harmoniously with the Earth, to do everything in our power to protect who we are and where we come from.

This year, we will run to Oak Flat from start to finish with the ancestors in our prayer.

Hundreds of Hohokam graves are now being recklessly excavated

In the news: Phoenix New Times reports that there are about 1,000 structures and about 700 graves here in this Hohokam village.
https://www.phoenixnewtimes.com/news/phoenix-public-housing-construction-unearths-hohokam-ancient-graves-11810900