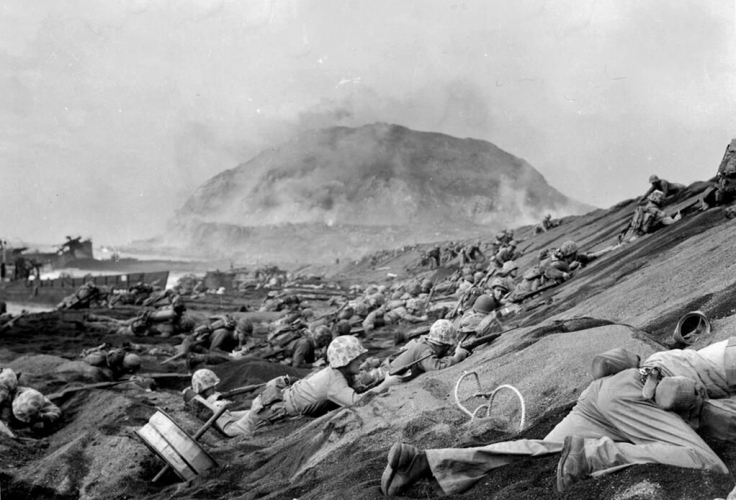 While they were not supposed to take part in combat, Black Marines serving on Iwo Jima played a significant role in defeating and killing the attackers.

Over the past three years, I have become friends with many African-American veterans of WWII and Korea, and my first encounter with one such veteran was in 2004 when I was preparing to go to France to help commemorate the 60th Anniversary of D-day.

I was graciously invited to accompany the men of the 29th Infantry Division, whom you may remember from the movie Saving Private Ryan. They were part of the first wave on Omaha Beach, D-day, June 6th, 1944.

The veteran whom I am speaking of was assigned to an ambulance battalion, and he was part of the Utah Beach invasion forces. His name was Charles Benning and it was through Charles that I met other African-American veterans from WWII. He went to France also, with other veterans from his associations.

Since that time, I have had the good fortune of meeting two Tuskegee Airmen, a driver for The Red Ball Express in Europe, and two soldiers from the 761st Tank Battalion.

Last year, I was asked by Dr. Joseph Lewis to help moderate a Historical Symposium at Central State University that featured many of our finest African-American WWII and Korean War veterans.

In addition, I was twice given the opportunity to speak with these distinguished veterans at Sinclair College at the invitation of Professor Margaret Peters. My life has been greatly enriched by their stories and my heart stirred when they each recounted their struggles with the prejudice and the discrimination in a segregated military.

The national best seller Flags Of Our Fathers, by James Bradley, was released in May of 2000.

The author’s father, John Bradley, was a medical corpsman on Iwo Jima in 1945, and was also one of the six flag-raisers.

The film adaptation of this book opened October 20th, 2006. After the film was released, a noted film director, Spike Lee, was outraged that not a single African-American military man was depicted or represented on that island, yet almost 900 African-American troops took part in the battle of Iwo Jima.

Actually, there were African-Americans shown in one scene where all the men were being informed, while aboard one of the ships, about where they were going and what they were expected to do.

My purpose here is not to evaluate or justify the presence or absence of African-American Marines on Iwo Jima in this movie.

Had the movie been focused on the battle for Iwo Jima per se, then I would surely understand the outcry. the argument did do was stir an interest in me about the African-American Marines who were there, keeping in mind the trials they faced, not only in the war, but personally just by being an African-American Marine.

What I discovered in my research was that those soldiers were restricted from front-line combat duty, but they played integral noncombat roles.

Under enemy fire (did I say non-combat?), they piloted amphibious truck units during perilous shore landings, unloaded and shuttled ammunition to the front lines, helped bury the dead, and weathered Japanese onslaughts on their positions even after the island had been declared secure.

According to Christopher Moore, the author of a book about African-Americans’ myriad contributions during World War II, "thousands" more helped fashion the airstrips from which U.S. B-29 aircrafts could launch and return from air assaults on Tokyo, about 760 miles northwest. Hosting that air base, Moore says, was Iwo Jima’s primary strategic importance.

Another Iwo eyewitness, Jim Rundles, wrote: “One of the bravest sights I’ve seen was on Iwo Jima where a black driver of a “duck,” time and time again delivered much needed ammunition to the Marines fighting at the foot of Mt. Suribachi where that flag was raised.

The Japanese shot two trucks out from under him, but he came back every time. Battle-hardened Marines cheered for him from their foxholes.” *quote is from Montford Point Marines, by Jim Rundles.

Lastly, I want to relate this story to you: It begins with a quote from Lt. Bob Merklin, a white P-51 pilot on Iwo in 1945. “I was right in the middle of that banzai attack. For whatever reason, when we landed there on the 22nd, they had put up tents to the northwest.

Why they put us up there, toward the area where the majority of the fighting was going on, I don’t know. But anyway, on the 26th at 5:00 in the morning, these 300 Japanese came out of the caves and hit our tent area.” The Japanese, armed with automatic weapons, bayonets, swords, and hand grenades, had made their way underground from the northern part of the island and attacked the tent area.

The Army Air Force units in the tent area did not have observation or listening posts out so they were obviously not prepared for combat, being above ground in tents. The Japanese came into that area and killed 42 pilots in their sleep with swords and bayonets. 88 were wounded. The quick reaction of the 5th Pioneer Battalion, a white unit, and the 8th Ammo and 36th Depot, both African-American units, pinched off the Japanese and then swept through, methodically killing, wounding, and capturing the Japanese.

Together, they saved what could have been a real catastrophe in the area. Two African American Marines were awarded Bronze Stars, one was killed and several others were wounded. There were 70,000 Marines engaged on Iwo Jima for 36 days.

There were 6,825 military men killed in action and nearly 28,000 wounded. It appears that the black Marines that served and fought on Iwo Jima were very instrumental in the success of securing that island.

The statement below could not be more appropriate at this time. “On Iwo Jima, in the ranks of all the Marines who set foot on that Island, uncommon valor was a common virtue.” Admiral Nimitz, Commander of the Fleet.
Added to the calendar on Fri, Feb 11, 2022 12:51PM
Related Categories: Central Valley | Racial Justice
Add Your Comments
Support Independent Media
We are 100% volunteer and depend on your participation to sustain our efforts!