Green Sunday: How We Really Create a Political Revolution

Dial by your location
+1 669 900 9128 US (San Jose)
+1 253 215 8782 US (Tacoma)
.
Please join us this evening for a Green Sunday based on the themes in Michael Goldstein's recently published book, "Blessed Disillusionment: Letting Go of What Cannot Save Us, Turning to What Can". Goldstein's presentation will basically track the book, explaining the limits of mobilizing people to protest every new ruling-class abomination, working to take over the Democratic Party, once more electing new and better people, seeking constitutional amendments to reform the political system, and—yes—third parties. The thesis is that these are useful, sometimes necessary, but that the political system absorbs such expressions of discontent while averting the fundamental change we need. Moreover, we face a real danger of neofascism, which the Democratic Party cannot stop.

“What Can . . . Save Us”? An actual popular revolution, i.e., structural change based on compelling the current regime to step aside in favor of our own self-rule. This can be brought about by a movement that invokes the image of the beloved community, embodies the values of such a community as its movement is building, and relies on nonviolent means. Goldstein has proposed, in some detail, a way to facilitate the emergence of such a revolutionary movement. Much of this analysis is new and therefore controversial, so we'll have plenty of time for questions and answers, which our presenter believes will serve both him and us.

***************
Michael Goldstein is an Oakland author and retired attorney who defended men on death row, worked in factories and on highways, joined Standing Rock water protectors, and ran against Nancy Pelosi under the slogan, “New faces in Washington cannot stop the rise of fascism or create a caring society. Michael will use the office to help build the movement that can.” Blessed Disillusionment has been endorsed by Cornel West, Joanna Macy, longshore leader Clarence Thomas, and others. His previous book was "Return of the Light: A Political Fable in Which the American People Retake Their Country".

Green Sundays are a series of free public programs & discussions on topics "du jour" sponsored by the Green Party of Alameda County and held on the 2nd Sunday of each month.
Added to the calendar on Sun, Feb 6, 2022 8:54AM
§The front and back covers of the book
by Green Party 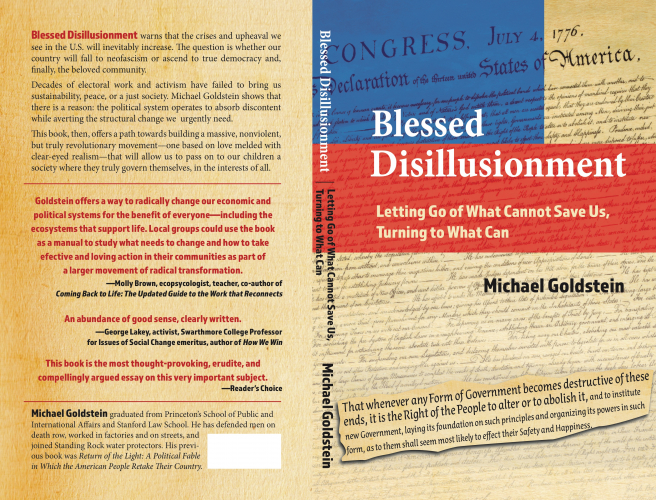 original image (3150x2400)
In case the image doesn't load properly, it's also online here: https://pbs.twimg.com/media/E8r2I0DVgAEiekR?format=jpg&name=4096x4096
Add Your Comments
Support Independent Media
We are 100% volunteer and depend on your participation to sustain our efforts!