Add an Event
Newswire
Calendar
Features
Home
Donate
From the Open-Publishing Calendar
From the Open-Publishing Newswire
Indybay Feature
Related Categories: California | Santa Cruz Indymedia | Animal Liberation | Environment & Forest Defense
Western monarchs rebound to final tally of nearly 250,000 butterflies
by The Xerces Society
Thursday Jan 27th, 2022 6:05 PM
PORTLAND, Ore.; Tuesday, January 25, 2022 – For decades, the Western Monarch Thanksgiving Count has been cataloging the rapid decline of one of North America’s most enigmatic butterflies. In a surprising and remarkable outcome, this winter brought a final tally of 247,237 monarch butterflies observed across the West, an over 100-fold increase from the previous year’s total of less than 2,000 monarchs and the highest total since 2016. 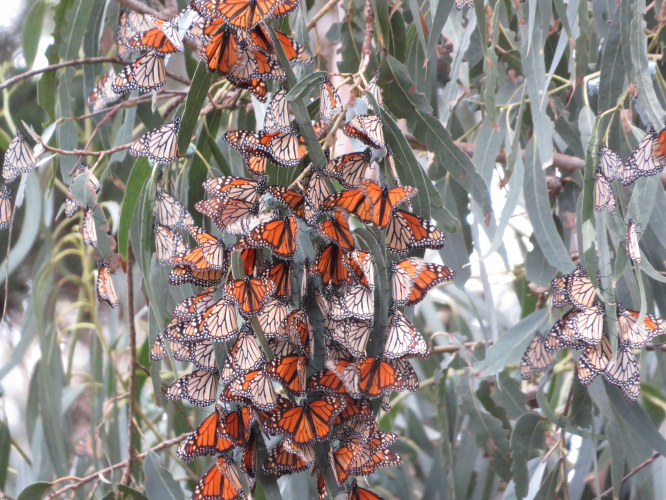 original image (5184x3888)
“We’re ecstatic with the results and hope this trend continues,” says Emma Pelton, the Western Monarch Lead with the Xerces Society. “There are so many environmental factors at play across their range that there’s no single cause or definitive answer for this year’s uptick, but hopefully it means we still have time to protect this species.”

Santa Barbara County reported the most monarchs this year at over 95,000, including the largest single site where more than 25,000 butterflies were counted on a private property. San Luis Obispo County came in a close second with over 90,000 butterflies reported at overwintering sites, including the Pismo Beach Butterfly Sanctuary managed by California State Parks, which had the second highest count at an overwintering site this season at 20,871 butterflies.

Typically, California’s central coast hosts the majority of monarchs, as well as a significant number in the San Francisco Bay Area. However, Bay Area sites had few or no monarchs this year, with fewer than 600 butterflies counted at overwintering sites stretching from Mendocino to San Mateo counties.

More monarchs were found starting near Santa Cruz, with over 1,000 at both Natural Bridges State Park and Moran Lake. And in Monterey County, the City of Pacific Grove celebrated the return of approximately 14,000 monarchs to their sanctuary. In Ventura and Los Angeles counties, monarchs were found in numbers unseen since the early 2000s, totaling nearly 19,500 and over 4,000 butterflies, respectively.

Thanks to public tips, this season also included the discovery of five new roosting locations in San Luis Obispo and Los Angeles counties, totaling over 7,000 butterflies.

These totals were observed thanks to a record-high volunteer effort to survey 283 overwintering sites. Supported by regional coordinators, volunteers seek out and record clusters of monarchs as they huddle together for winter warmth.

“I actually had more volunteer counters this year than I have in the last 10 years, because there are so many people who care about monarchs and want to help,” says Jessica Griffiths, the volunteer regional coordinator in San Luis Obispo County. “They were out there at the crack of dawn in the cold, scanning the trees with binoculars. Some of the newer volunteers saw monarch clusters at their sites for the first time this year, which was really exciting.”


Rebound offers a ray of hope to ward off extinction

While the 2021 tallies are worth celebrating, western monarchs have undergone a significant decline, losing more than 95% of their population since the 1980s.

“This year’s total is a step in the right direction, but still indicates a severe population decline,” says Isis Howard, Endangered Species Conservation Biologist for the Xerces Society. “Now more than ever, we have an opportunity to double-down on our conservation efforts. Acting quickly to harness the momentum of this upswing is our best chance at preventing western monarchs and other at-risk butterflies from being lost forever.”

Key actions to aid the recovery of western monarchs include protecting their existing habitat and overwintering sites, reducing pesticide use and restoring new habitat by planting nectar plants and native milkweed in the appropriate locations of their range, as outlined in the Xerces Society’s Western Monarch Call to Action.

“Insects can be amazingly resilient if we give them a chance,” says Xerces Director Scott Hoffman Black. “Everyone has a role to play, whether that’s adding pollinator plants and avoiding pesticides in your home garden, or advocating for monarch-friendly policies within our neighborhoods, public lands and plant nursery and agriculture providers.”


ABOUT THE WESTERN MONARCH COUNT

The Western Monarch Count is an annual effort of volunteer community scientists to collect data on the status of the western monarch population during their overwintering season, which occurs from approximately October through March. Observations stretch along the Pacific coast from Mendocino, California to Northern Baja, Mexico, plus a few inland sites in California and Arizona. The height of this volunteer effort occurs during the Western Monarch Thanksgiving Count, which runs for three weeks surrounding the Thanksgiving holiday. It began as a concerted effort in 1997 by Mia Monroe, Dennis Frey and David Marriott. Today, the count is coordinated by Xerces Society for Invertebrate Conservation and Mia Monroe.


ABOUT THE XERCES SOCIETY FOR INVERTEBRATE CONSERVATION

The Xerces Society for Invertebrate Conservation protects the natural world by conserving invertebrates and their habitat. Established in 1971, the Society is a trusted source for science-based information and advice and plays a leading role in protecting pollinators and many other invertebrates. The Xerces Society has been active in monarch and pollinator conservation in California for decades. Xerces' work has contributed to the restoration of monarch overwintering sites, expanding pollinator habitat on farms and distributing more than 100,000 pollinator plants to California residents through the Xerces habitat kit program. To learn more, visit xerces.org or follow us @xercessociety on Twitter, Facebook or Instagram. 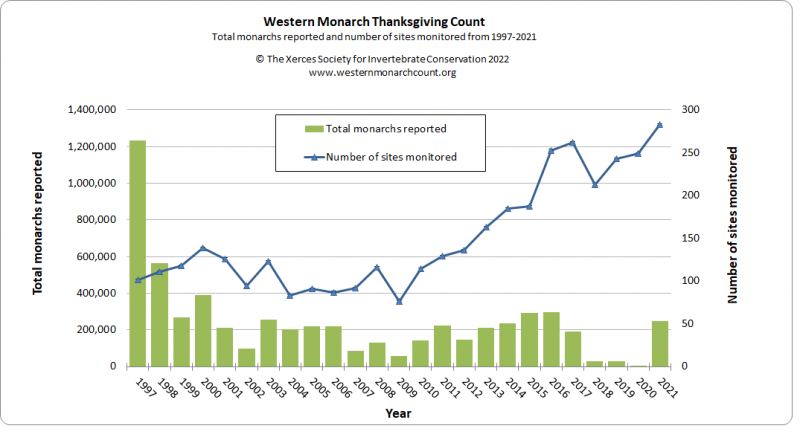 original image (1075x596)
Graph of the total abundance estimates of western monarch butterflies with number of sites monitored from 1997-2021 by the Western Monarch Thanksgiving Count.

Photo credit: Xerces Society
https://xerces.org/
Add Your Comments
Support Independent Media
We are 100% volunteer and depend on your participation to sustain our efforts!