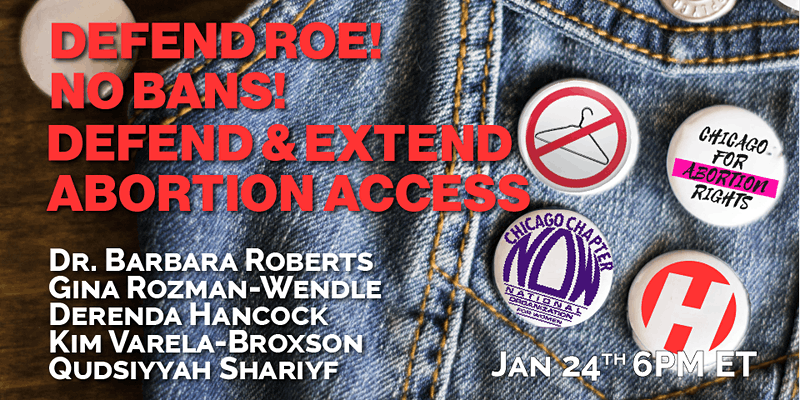 
January 22nd is the 49th anniversary of the historic 1973 Roe v. Wade decision that decriminalized abortion, a decision that now is on the chopping block after decades of rulings that have limited access to abortion. The Supreme Court is reviewing a Mississippi 15-week abortion ban case while it has allowed Texas to outlaw abortion after just six weeks and empower vigilantes to enforce its ban. All are designed to roll back if not overturn Roe all together.

How can we mobilize the majority that still defends Roe?

***Register through Eventbrite to receive a link to the video conference on the day of the event. This event will also be recorded and live captioning will be provided.***

Dr. Barbara Roberts, MD has been a leader in the abortion rights movement for over 50 years. She witnessed first-hand the horrors of illegal abortion before Roe v Wade made abortion legal in 1973. She helped found the Women’s National Abortion Action Coalition (WONAAC) and was the keynote speaker at the first national pro-choice demonstration in Washington DC in November 1971. Dr. Roberts was the first female cardiologist in the state of Rhode Island, and is the author of several books, including How To Keep From Breaking Your Heart: What Every Woman Needs to Know About Cardiovascular Disease .

Derenda Hancock is co-coordinator of the Pinkhouse Defenders, volunteers who create a safe environment for patients of "The Pinkhouse," aka Jackson Women's Health Organization, the target of the lawsuit to overturn Roe now before the Supreme Court. She is a co-founder of WeEngage, a non-profit that works to advance an abortion-positive change in our culture, supporting education and engagement of the public using factual unbiased information about abortion, abortion access legislation, and the truth about what is happening outside abortion clinics when people come to their appointments.

Qudsiyyah Shariyf (she/they) is a fierce advocate for reproductive justice and a full-spectrum birthworker. They strive to embody and practice an unapologetically Black, queer, feminist, and anti-capitalist politic. At the core of Qudsiyyah’s passion for reproductive justice is an understanding of all people’s inherent worth and a sense of duty to fight for dignity, respect, and self-determination for all marginalized people. As the Program Manager with Chicago Abortion Fund she oversees the helpline that directly connects hundreds of people to abortion care through financial, logistical, and emotional support.

Kim Varela-Broxson (she/her) is an abortion fund volunteer with the Bridge Collective, reproductive nonprofit worker at the National Network of Abortion Funds, and a member of Austin DSA.

Gina Rozman-Wendle (moderator), President of the Chicago Chapter of the National Organization for Women (CNOW). CNOW strives to be Chicago’s intersectional feminist resource in the areas of economic equity, women’s health, reproductive freedom, ending violence against women, and LGBTQ+ rights. CNOW is committed to driving bold, relevant change for Chicago women and girls by dismantling oppressive systems and building an inclusive community of activists.
END_OF_DOCUMENT_TOKEN_TO_BE_REPLACED
Added to the calendar on Mon, Jan 24, 2022 8:26AM
Add Your Comments
Support Independent Media
We are 100% volunteer and depend on your participation to sustain our efforts!