Add an Event
Newswire
Calendar
Features
Home
Donate
From the Open-Publishing Calendar
From the Open-Publishing Newswire
Indybay Feature
Related Categories: California | Racial Justice
2022 Rosa Parks Day in Los Angeles, California and beyond
by Michael Harris
Monday Jan 24th, 2022 2:22 AM
2022 Rosa Parks Day in California and beyond, we pause to reflect upon Sister Rosa, and remember her example of “Womanity” showcasing dignified faith, work and courage, this special Black History Month, in her winter home of Los Angeles, California. 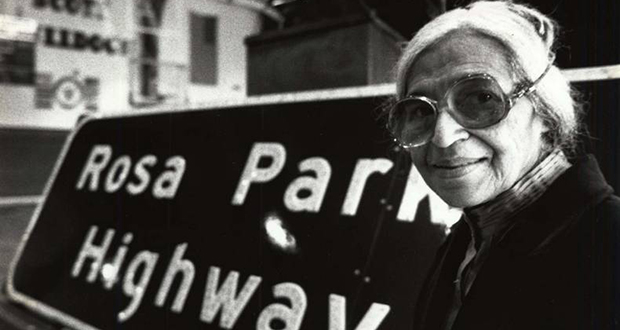 Today, we take a deep dive and share some of the lasting “unique” values essential to creating and sustaining Rosa Parks Day in the Great State of California.

Together, we recognize her life-long commitment to justice and share an amazing opportunity to inspire a new generation of leaders toward consider a special the touch of “womanity” on the occasion of her birth.

On February 4, 1913 Rosa Louise McCauley Parks was born from the “Blood Stained Clay” from the State of Alabama. Her long and storied life is a tribute to triumph in the face of unimaginable obstacles.

Together, we reflect on the inaugural February 4, 2000, official recognition of Rosa Parks Day in California championed by then California Assembly Speaker Herb Wesson and long service as Los Angeles President of the City Council, we celebrate and honor his visionary leadership lifting up Womanity.

Global inter-modal transportation systems throughout the entire State of California remains the backbone of the 5th largest economy on earth with the Port of Los Angeles leading the way.

Expanding equity and inclusion throughout our California Transportation Logistics systems, while working cooperatively to expand “California Grown” products throughout the world is part of our work expanding Rosa Parks Day.

In the tradition, Rosa Parks, extends our Black Agriculture heritage, reconnecting Classical African Civilization, through the Indigenous Black Warrior River Basin of Alabama to the Central Valley of California, “the Greatest Garden in the World” resting firmly upon her lifelong African Methodist Episcopalian faith in the creator of all things seen and unseen.

The early life of Rosa Louise McCauley was greatly influenced by her parents Leona and James McCauley and her grandparents Rose and Sylvester Edwards who helped stabilize her young world during the difficult days of "Jim Crow Laws" that allowed systemic terrorism of people of African descent throughout America, in the “Cradle of the Confederacy.”

Rosa's mother was a schoolteacher who taught "Ag in the Classroom" and cultivated her favorite vegetables broccoli, collard greens, sweet potatoes and string beans in the “family kitchen garden.”

The origins of the name ‘Alabama’ comes from a rough translation "herb gathers" from indigenous languages along the Tombigbee River Basin, Black Warrior River Valley, Alabama, part of a larger ancient civilization of "Mound Builders," reaching back well over 5000 years of ancient civilization within Washitaw Proper.

The broader Mississippi River Basin became part of the "Louisiana Purchase," nearly 1/3 of the entire continental United States, acquired in 1803 from the Emperor of the French, Napoleon Bonaparte, who was given authorization to the land claim by Spanish authority.

After fall of the Spanish Port, at Mobile Bay in 1814, the path toward becoming a U.S. territory and later the State of Alabama, affectionately known as the “Heart of Dixie,” was ratified by the U.S. Congress in 1819, our 23rd State.

In 1823, the U.S. Supreme Court handed down a decision which stated that "Indians" could occupy lands within the United States, but could not hold “legal title” to those lands, only “white men” could hold U.S. title to land, at that time.

The 1849 California legal foundation and ongoing fundamental belief by some toward the need to disenfranchise indigenous populations and people of African Descent seeking redress from vast acres of land loss throughout the Great State of California, United States of America and 6 US Territories.

In 1830, President Andrew Jackson established an official U.S government policy called the "Indian Removal Act" that indigenous populations and people of African descent call the "Trail of Tears and Death" a forced removal from the land and destruction of cultural ways, and many were forced to relocate to the Oklahoma Territory.

The taking of ancestral lands and establishing "King Cotton" on the back of enslaved human beings, destroying ancient civilizations of antiquity, our U.S. Agriculture industries flourished as our nation slipped into Civil War, over the politics of “Chattel Slavery.” During the US Civil War, the United States Department of Agriculture was established to help mitigate the loss of free labor.

Few choose to discuss Jefferson Davis, a West Point Graduate, Mississippi Senator and a U.S. Secretary of War, who was elected President of the Confederate States of America and fought bravely to retain slavery throughout the land, long after most had surrendered.

Last year, members of Congress established Juneteenth legislation as a National Holiday and interestingly legislation is in the process to establish Rosa Parks Day, on the occasion she was arrested in Montgomery, Alabama, original capital of the Confederate States of America, was the site of Rosa Parks’ transition into global recognition.

Together, after over a year of successful boycotts and expert legal challenges, the Montgomery Improvement Association changed the world and renewed the promise and effective intent of the “Founding Fathers of the United States of America” toward “Forming A More Perfect Union.”

The ancient history of the lands in Alabama, helped birth the Tuskegee Institute Airman, who trained at nearby Maxwell Air Force Base to facilitate integration of the Armed Services during the Korean War. Air transportation systems during World War II, greatly assisted by First Lady Eleanor Roosevelt, allowed Black Air Force Pilots to showcase excellence, featured in the film "Red Tails."

Long before December 1, 1955, Rosa Parks experienced integration as a working teenager on Maxwell Air Force Base, where she met and married Raymond Parks, forging a lifelong “power couple” in struggle.

2022 Rosa Parks Day in California and beyond, we pause to reflect upon Sister Rosa, and remember her example of “Womanity” showcasing dignified faith, work and courage, this special Black History Month, in her winter home of Los Angeles, California.