Add an Event
Newswire
Calendar
Features
Home
Donate
From the Open-Publishing Calendar
From the Open-Publishing Newswire
Indybay Feature
Related Categories: San Francisco | Health, Housing & Public Services
Station 40 is Resisting Eviction
by Friends of Station 40
Sunday Jan 23rd, 2022 11:42 PM
Station 40 has provided a place to gather and affordable housing in the Mission for eighteen years, and supporters of this space are fighting to keep it from being evicted by predatory landlords. 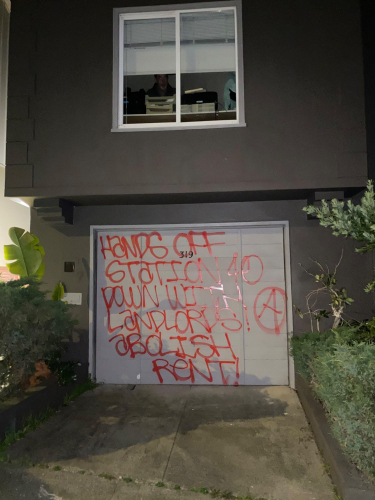 original image (1875x2500)
Station 40 is a collective anarchist space that has housed countless individuals when they most needed it and hosted benefits, fundraisers, info sessions, workshops and community events throughout the last eighteen years. In March 2020, as the pandemic began to take hold, Station 40 joined thousands of other households in a rent strike. All over the world, people chose their own health and safety over paying their rent, prioritizing their needs over their landlords.

Now, even in the face of ongoing crisis, temporary local moratoriums have expired and evictions have resumed. The State is offering limited rent relief that does little more than bail out parasitic landlords and get people back to work and paying their full rent again. Station 40 will not take this path of bread crumbs, and is instead choosing the path of squatting, occupation, and everything for everyone.

On Sunday, January 23, over twenty supporters of Station 40 held a noise demo at the residence of the Jolish family, the landlords that are attempting to evict the space for the second time in the last several years. Places like Station 40 are always under threat of gentrification, and once they disappear they are gone forever. Landlords and developers need to know that this fight is not over!