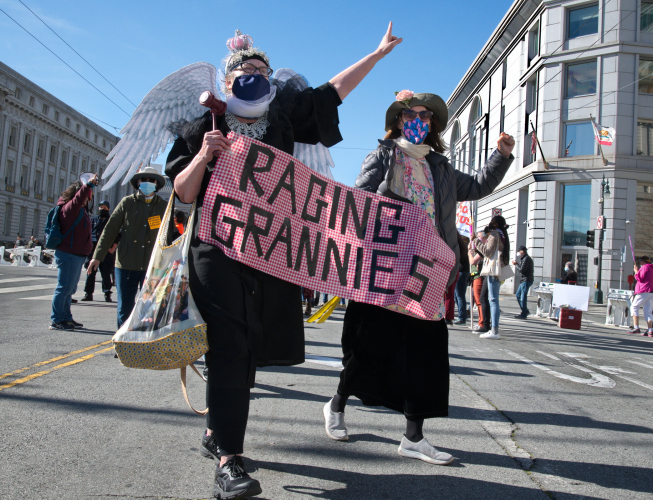 San Francisco's January 22nd "Walk For Life" rally in front of City Hall was challenged by reproductive rights protesters. After a rally at the Phillip Burton Federal Building, the women's rights activists marched to where those protesting abortion had assembled.

For their walk for "life" a few hundred Catholic school high school age students were bused in by priests and nuns. Consistent with their view that wearing a mask to avoid infecting others is a violation of human rights (while forced pregnancy is not) few wore masks. At the same time they expressed boundless love for the unborn, compared to their love for the post born which is not so much. Several were openly hostile to those demanding women's rights. One woman, her intense patriotism indicated by her red white and blue, flag decorated outfit, tried to prevent photos from being taken (see several photos of her below).

One lover of life, dressed in, how to describe it, "Jan 6th Capitol attack chic," looked menacing. Police stayed close to him. With their orange vests the women's rights demonstration security volunteers, with linked arms, stood in front of the more menacing counter counter protesters.

One of the Raging Grannies dressed up as Justice Ginsberg in Heaven. She and other Grannies were prominent in the action.

While some "lifers" may feel sincere in what they see as a love of life, their outlook requires forced motherhood, and this is not much of a stretch to what they never seem to oppose, forced pregnancy, that is, rape. 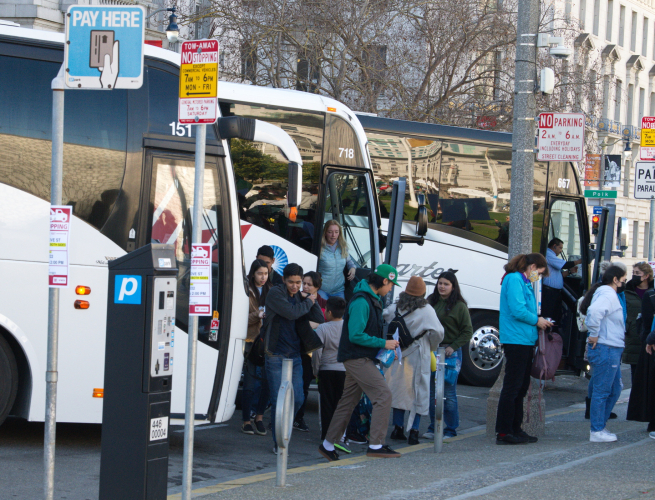 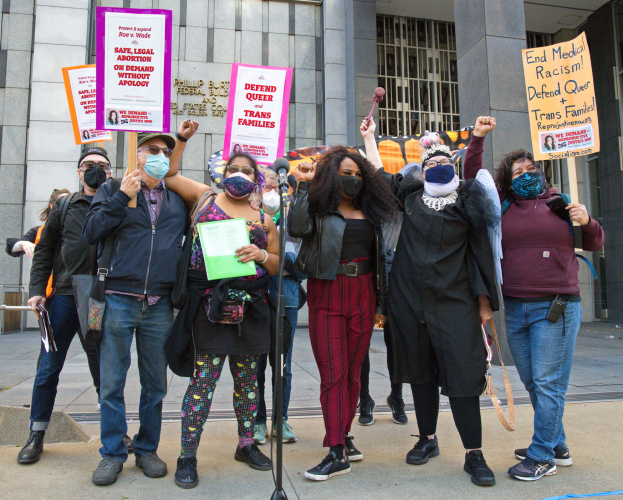 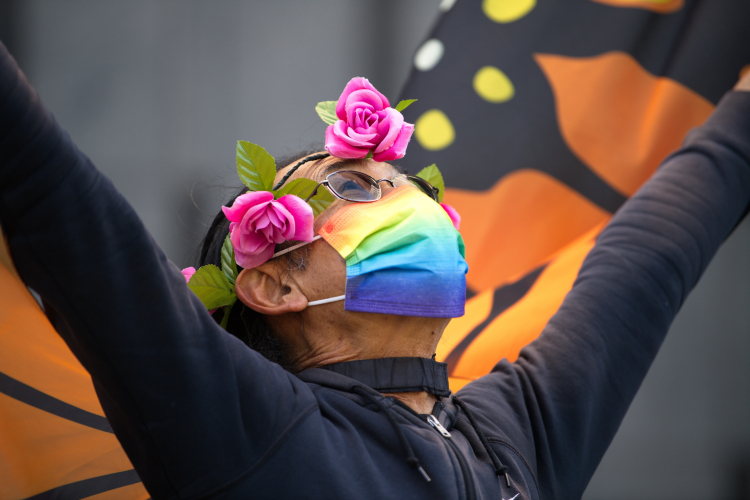 original image (2102x1400)
Sharat G. Lin @danceofpeace in the wings of a monarch butterfly, a symbol of transformation.
§Abortion on Demand and Without Apology
by Leon Kunstenaar
Sunday Jan 23rd, 2022 11:38 AM 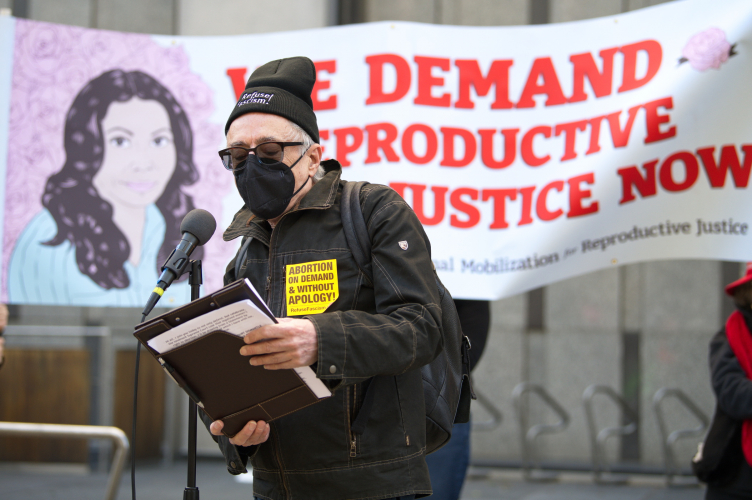 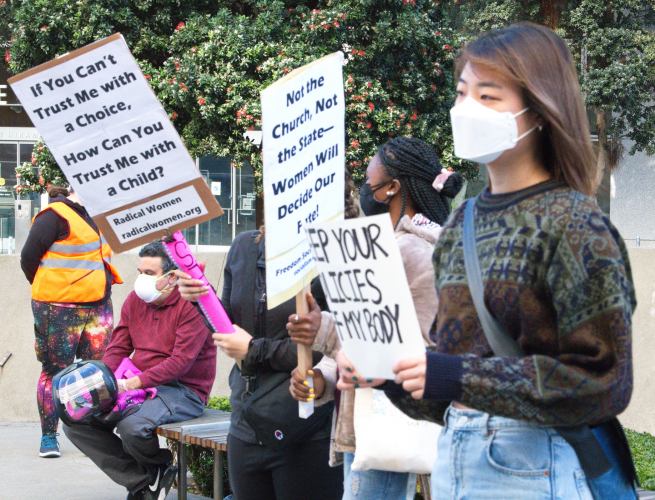 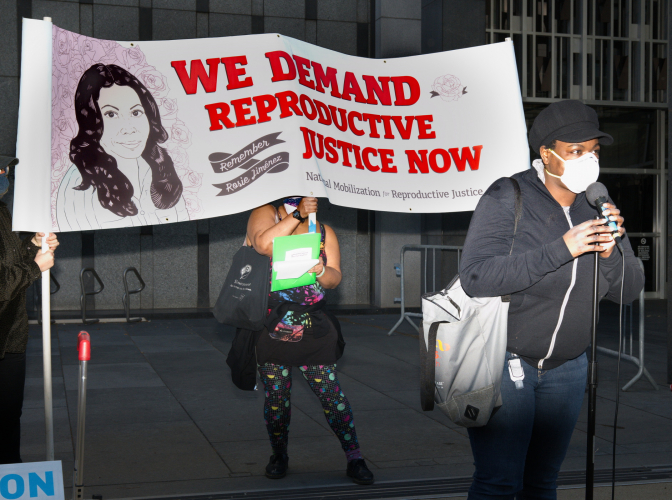 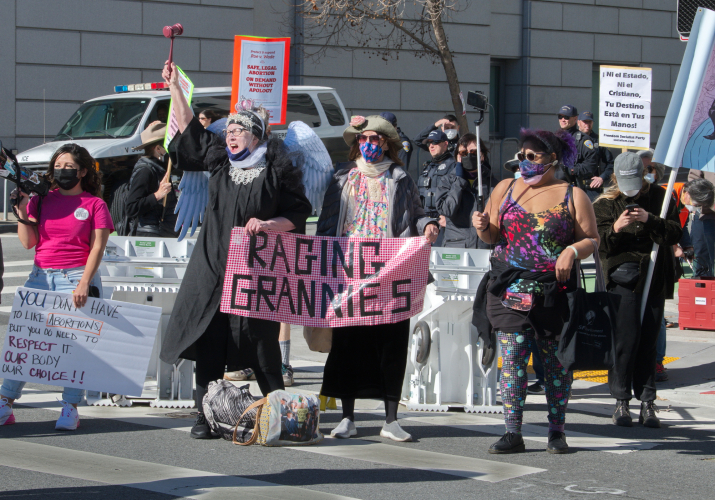 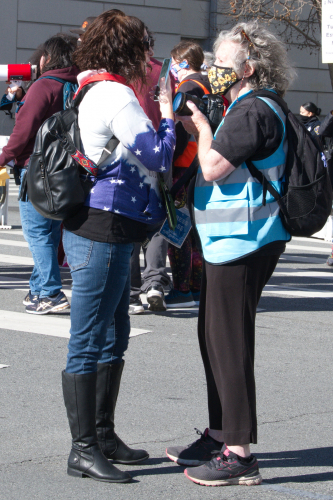 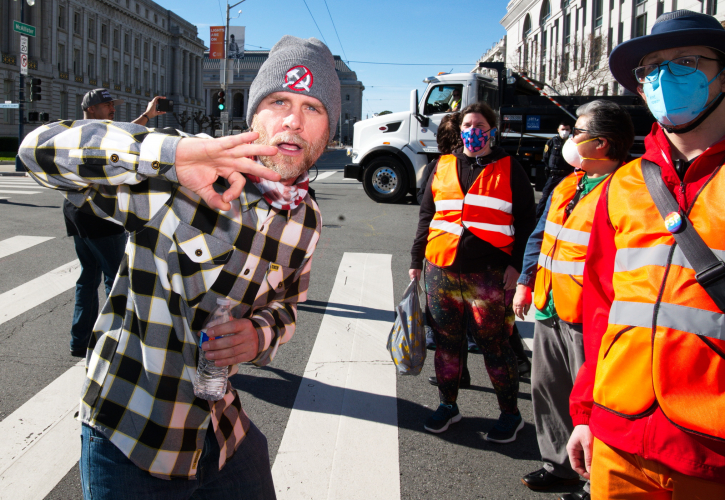 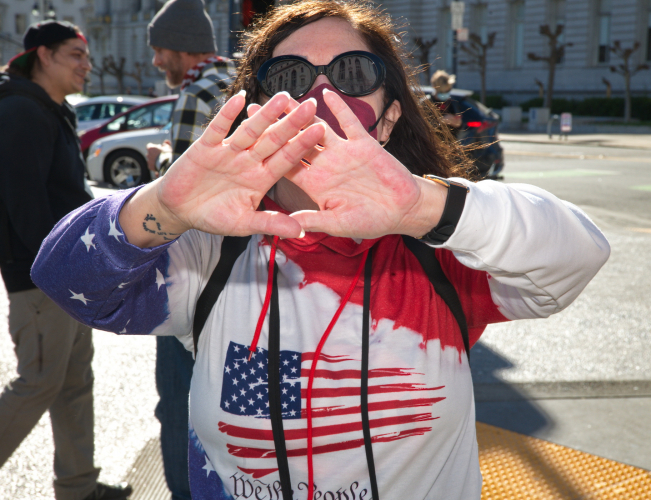 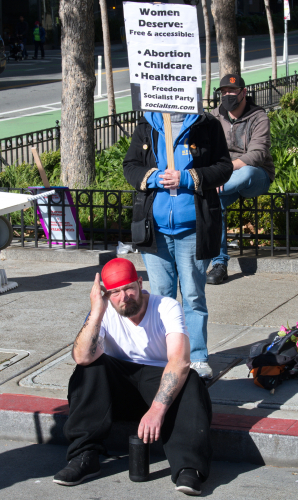 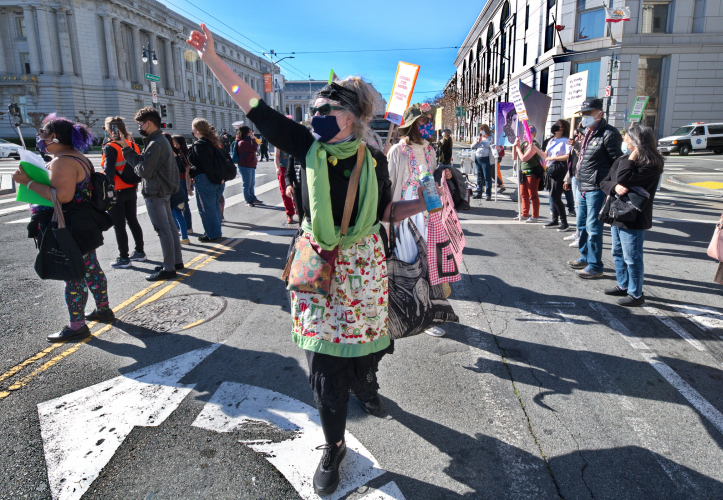 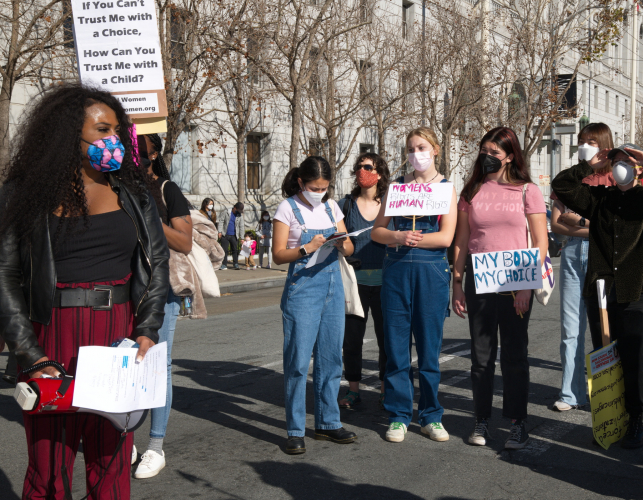 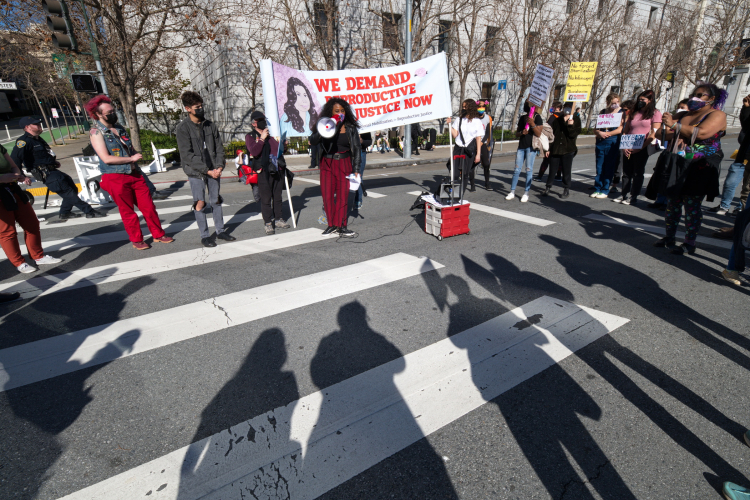 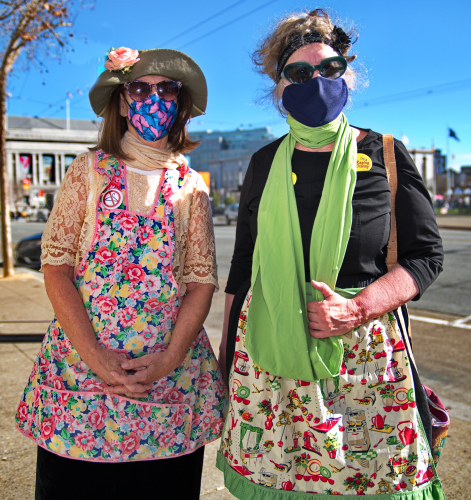 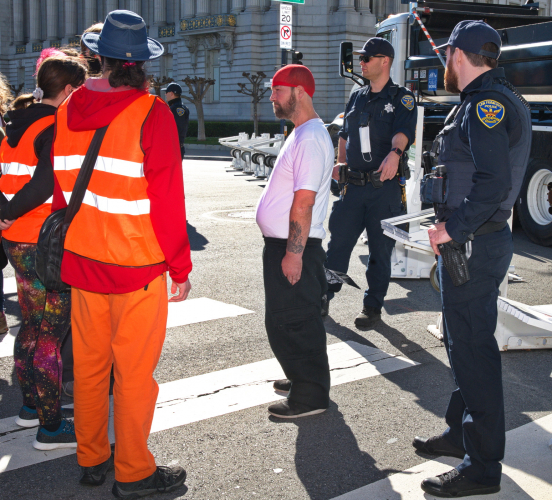 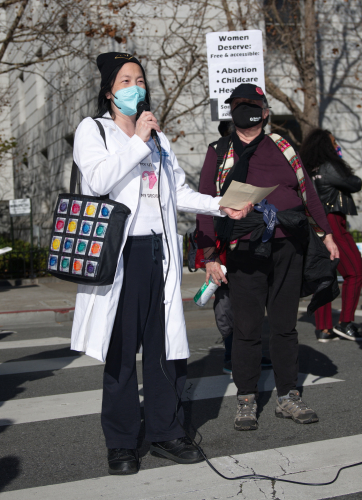 original image (1400x1929)
Dr. Sophia Yen of Pandia Health with her condom decorated purse spoke about the danger to women's health if Roe is overturned.
§
by Leon Kunstenaar
Sunday Jan 23rd, 2022 11:38 AM 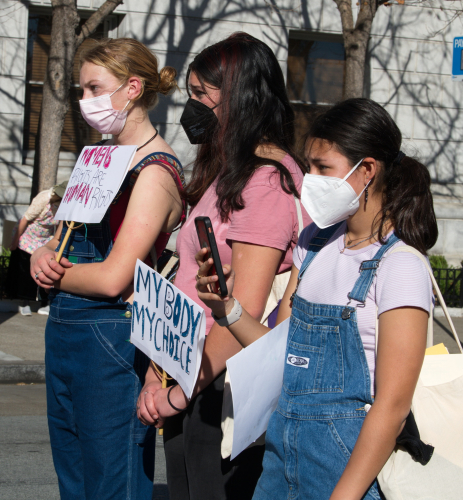 original image (1400x1511)
Add Your Comments
Support Independent Media
We are 100% volunteer and depend on your participation to sustain our efforts!