Add an Event
Newswire
Calendar
Features
Home
Donate
From the Open-Publishing Calendar
From the Open-Publishing Newswire
Indybay Feature
Related Categories: East Bay | Labor & Workers
NO Public Money To A's Billionaire Owner John Fisher For Stadium In Port Of Oakland
by Labor Video Project
Saturday Jan 22nd, 2022 7:20 PM
A rally was held at Oakland City Hall on January 19, 2022 to oppose the use of public money to fund billionaire GAP and A's owner John Fisher build a stadium on Howard Terminal in the Port of Oakland. This privatization will threaten the jobs in the port and gentrify West Oakland. The Democratic Party politicians are supporting this negotiation with Fisher. 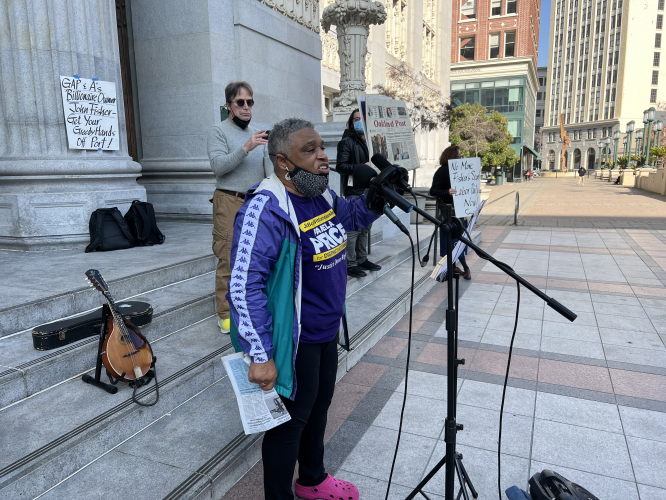 original image (4032x3024)
On November 19, 2022 a rally was held at Oakland City Hall to oppose using any public money to build a new stadium for the A's at the Howard Terminal in the Port of Oakland. The politicians in the City of Oakland including the Mayor Libby Schaaf, the Oakland City Council and the Alameda Board of Supervisors are continuing to allow negotiations to give $800 million in public funds to billionaire John Fisher who owns the A's and the GAP corporation to build a stadium at the Howard Terminal in the Port.

Speakers reported on the privatization of public land around the country ad the plans to gentrify and remove the Black and Brown residents through Fisher's development plan to build 3,000 1 million dollar condos and a hotel next to the stadium.

The billionaires project is also being pushed by Liz Ortega-Toro of the Alameda Labor Council, and Andreas Cluver, from the Alameda County Building & Construction Trades Council who is also the president of the Port of Oakland Commission. He is not only for selling off the Howard Terminal for Fisher's stadium but is pushing for a war between the Teamsters and ILWU members by supporting an agreement with Eagle Rock Aggregates, Inc., for a Bulk Marine Terminal Comprising Approximately 18 Acres of Land and 3 Acres of Water at Berths 20-22, Providing for an Initial Term of 12 Years and for the work to be done by Teamsters instead of ILWU who have always done this work.

Port truckers also drove in solidarity around the rally. The Port management is already canceling leases with Port truckers in preparation for turning the port over to Fisher and the A's. Speakers also pointed out that the trucks which now use the Howard Terminal as a staging area will end up on the streets of West Oakland further contributing to pollution in the community. 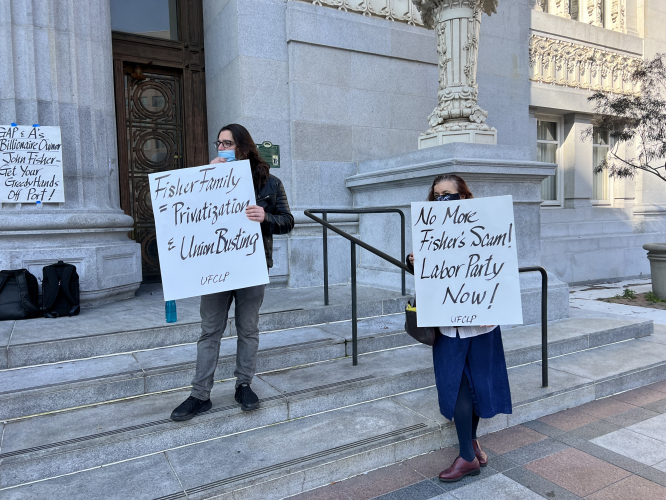 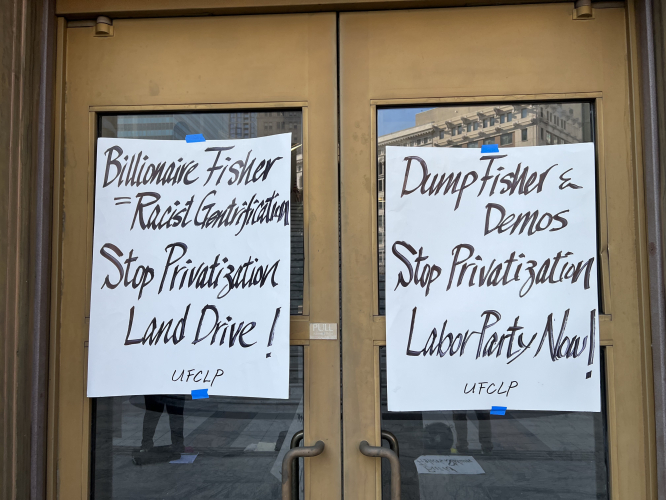 original image (4032x3024)
On the front door of Oakland City Hall the call for a labor party and against public money for billionaires.
https://youtu.be/7L3detM583c
§Stadium Rip-offs Of Cities Throughout the US
by Labor Video Project
Saturday Jan 22nd, 2022 7:20 PM 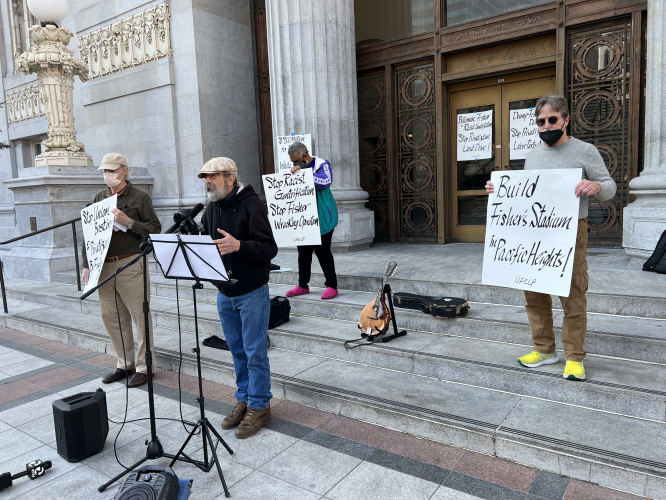 original image (4032x3024)
Historian and anti-privatization advocate Harvey Smith spoke about the fact that most of the stadium deals by cities in the US has led to a financial loss for the cities.
https://youtu.be/7L3detM583c
§Rob Banta & Nancy Skinner with Newsom Passed Bill For Billionaire Fisher
by Labor Video Project
Saturday Jan 22nd, 2022 7:20 PM 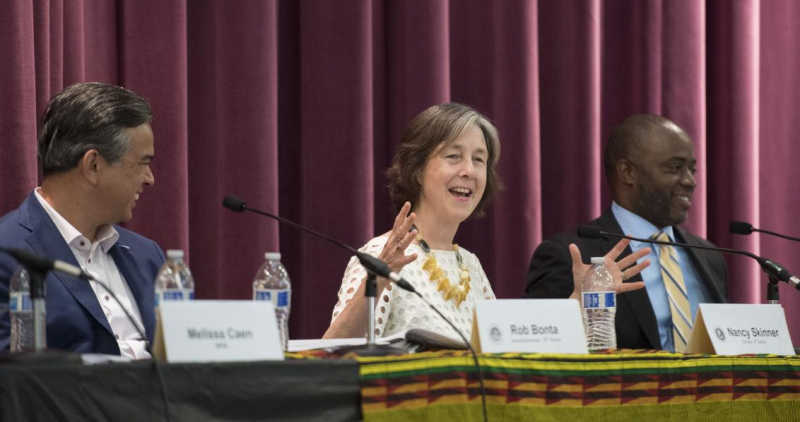 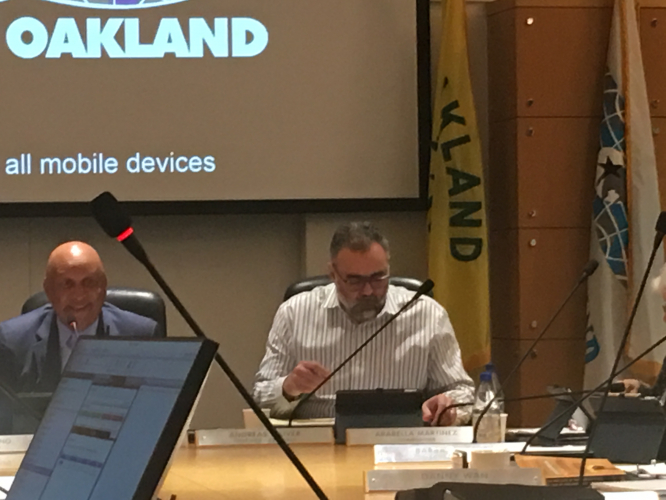 original image (4032x3024)
Andreas Cluver who is president of the Oakland Port Commission and executive director of the Alameda Building Trades has supported the privatization of the Port and is attacking the ILWU with the award of a gravel terminal to Teamsters although ILWU members have always done the work on the port. His role as an operative for billionaire John Fisher, developers and the Democratic Party is a threat to working people speakers pointed out.
https://youtu.be/7L3detM583c
§John Fisher and A's Manager Playing Oakland With Help Of Libby Schaaf
by Labor Video Project
Saturday Jan 22nd, 2022 7:20 PM

original image (3103x1085)
Billionaire A's owner John Fisher and his manager Dave Kaval who is also on the board of directors of the union busting Rocketship charter controlled by the Fisher family is playing the people of Oakland with their accomplice Mayor Libby Schaaf.
https://youtu.be/7L3detM583c
Add Your Comments
LATEST COMMENTS ABOUT THIS ARTICLE
Listed below are the latest comments about this post.
These comments are submitted anonymously by website visitors.