Add an Event
Newswire
Calendar
Features
Home
Donate
From the Open-Publishing Calendar
From the Open-Publishing Newswire
Indybay Feature
Related Categories: California | Racial Justice
22nd Annual, Rosa Parks Day in California - County of Los Angeles
by Sara Kettler, edited
Sunday Jan 16th, 2022 9:53 PM
Medical costs and the difficulties of working while ill pushed Parks and her family to the edge. In July 1960, Jet magazine described her as a "tattered rag of her former self — penniless, debt-ridden, ailing with stomach ulcers, and a throat tumor, compressed into two rooms with her husband and mother." 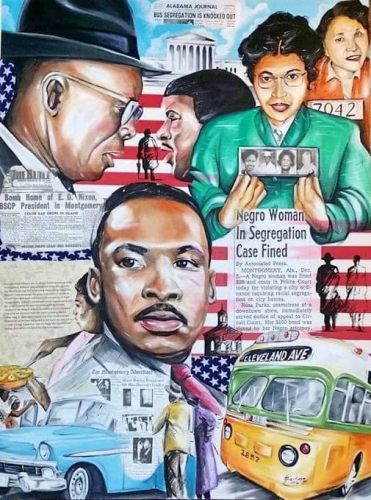 original image (505x679)
Long before Christmas Season in 1955, Rosa Louise McCauley Parks was active in the struggle for human rights.

Decades would pass before Parks' catalyst role in the Montgomery Bus boycott would make her a respected figure across the country; between the bus boycott and widespread recognition for her work, Parks' life encompassed both serious difficulties and hard-won triumphs.

Yet the boycott's conclusion didn't make it easy for either of them to get back to earning a living — Parks was too identified with the changes in the "Cradle of the Confederacy"
for her or her husband to land another regular job in Alabama.

Parks had been a dedicated volunteer for the Montgomery Improvement Association (MIA), a local group that had helped coordinate the boycott, but the organization didn't hire her, nor did any other civil rights group. Despite contributions such as traveling to give talks about the boycott to raise funds for the MIA and the NAACP, male leadership did not identify with Parks' needs.

There was also jealousy among locals over the amount of attention Parks had received. In the end, she decided her only choice was to leave Alabama with her husband and mother.

Her family moved to Detroit, hoping to find work. In 1957, Parks and her family went to Detroit, where her brother and cousin lived. Unfortunately, finding work there still wasn't easy, either.

Rosa Parks soon headed to Virginia to take a job as a hostess at the Hampton Institute's Holly Tree Inn. But when promised accommodation for her mother and Raymond never came through, Parks returned to Detroit at the end of 1958.

In Detroit, Raymond had to go through required training before he could become a barber and Parks could only find piecework sewing jobs.

Then she had an operation for an ulcer (a condition that had developed under the stress of the bus boycott,) and needed to have a throat tumor removed.

Medical costs and the difficulties of working while ill pushed Parks and her family to the edge. In July 1960, Jet magazine described her as a "tattered rag of her former self — penniless, debt-ridden, ailing with stomach ulcers, and a throat tumor, compressed into two rooms with her husband and mother."

Things finally began to turn around for the Parks family in Spring of 1961.

Parks had remained involved in the fight for civil rights after moving to Detroit, but she didn't have the college degree required for positions in organizations like the NAACP, and as in Alabama, no one in the mostly male leadership tried to help her get a job.

Some support came Parks' way, particularly after her problems became more public, and the NAACP ended up paying her hospital bill, which had gone into collection.

By the spring of 1961, their situation was better:

Raymond was barbering while she was healthy enough to handle steady work as a seamstress at the Stockton Sewing Company, where she would put in 10-hour days and was paid 75 cents for each piece of the aprons and skirts she completed, which together added up to enough to live on.

Having worked with Martin Luther King Jr. on the bus boycott, Parks truly admired the civil rights leader. At the Southern Christian Leadership Conference's annual convention in 1962, she saw a man attack King — and experienced how King made sure the attacker faced no retaliation afterward.

Following his assassination in 1968, she traveled to Memphis to support a sanitation workers' march that King had been involved in before proceeding to King's funeral.

Yet Parks also found much to appreciate in Malcolm X's leadership. Her beliefs more closely aligned with Malcolm's, and differed from King's, on the limits of non-violence.

In a 1967 interview, Parks stated, "If we can protect ourselves against violence it’s not actually violence on our part. That’s just self-protection, trying to keep from being victimized with violence."

She eventually got a job as an assistant to Congressman John Conyers after moving to Detroit and despite her hardships, Parks remained committed to helping her community. She joined neighborhood groups that focused on everything from schools to voter registration.

In 1964 she volunteered for John Conyers' congressional campaign. The candidate appreciated her support and credited her with getting King Jr. to come to Detroit and provide an endorsement. After Conyers won the election, he hired Parks as a receptionist and assistant for his Detroit office. She started in 1965 and remained until her retirement in 1988.

The job was a boon for Parks' financial situation, as it offered a pension and health insurance. And Parks excelled at work that ranged from aiding homeless constituents to joining Conyers in protesting a General Motors decision to close local plants. Conyers once remarked, "Rosa Parks was so famous that people would come by my office to meet her, not me."

Years after the boycott, Parks was still a target.

Unfortunately, Rosa Parks is not universally admired, many black people believe she gets undeserved attention for her and her family's sacrifice.

For many white people who want to maintain the racist status quo, she'd been a hated figure since the Montgomery bus boycott. During that action, they'd made menacing calls and sent death threats. The attacks had been so venomous that Parks' husband Raymond suffered a nervous breakdown.

Though the boycott had ended in 1956, hateful messages continued to be sent to Parks into the 1970s. She was accused of being traitor and of harboring Communist sympathies. (Racists often felt African Americans were not capable of organizing on their own and had to be getting outside help.)

Even while working for Congressman John Conyers, she remained a target; rotten watermelons and hate mail arrived for her at his Detroit office when she started there.

Yet, as always, such cruel attacks didn't keep Parks from doing her job and being our warrior for good, a first-class example of womanity.
Add Your Comments
Support Independent Media
We are 100% volunteer and depend on your participation to sustain our efforts!