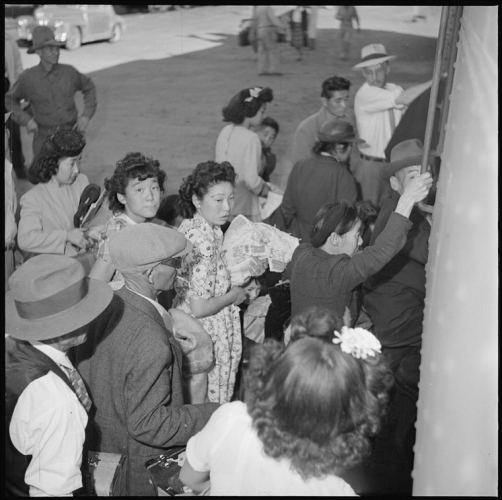 Further instructions on joining this virtual program will be announced on the SJNOC website so please keep checking for updates. You can also subscribe to our E-News above for the latest updates.

The event falls on the 80th anniversary of the signing of Executive Order 9066 which led to the World War II incarceration of more than 120,000 people of Japanese descent, two-thirds of whom were American citizens.

The theme for this virtual program is Overcoming Hate and Fear: The 80th Anniversary of E.O 9066. Over the past two plus years, many communities have had to deal with multiple challenges including the deadly pandemic; economic, educational, and personal hardship; intense political division, and physical and emotional isolation.

During these tumultuous times, we also witnessed violent hate crimes and racist acts, including horrific incidents directed toward AAPI and African-American communities. In the midst of great tragedy and horror, we also saw different communities come together in the struggle for racial and social justice.

Since one of the driving forces behind WW II Japanese American incarceration was attributed to racial prejudice, many Japanese Americans feel compelled to join with other communities in denouncing hate, prejudice, and violence and in continuing the fight for social justice.

Related to this theme, NOC is honored to have featured Day of Remembrance speaker, Cynthia Choi, a codirector of Chinese for Affirmative Action and cofounder of Stop AAPI Hate. Often cited by major news organizations, Stop AAPI Hate has had a tremendous impact in raising awareness about the rise of violence and hate-based incidents directed towards the AAPI community. Not only is Stop AAPI Hate trying to understand the realities of anti-Asian racism, the organization is also a platform for finding community-based solutions.

Locally, the San Jose Nikkei Resisters (SJNR) is one group that is forming community-based solutions. Over the past year, SJNR partnered with the Council on American Islamic Relations (CAIR) in presenting bystander intervention training and de-escalation techniques. Kelsey Ichikawa is the chair of the Reimagining Public Safety Subcommittee in SJNR and will talk about their recent work.

The 2022 Day of Remembrance program will also commemorate the 80th anniversary of the signing of Executive Order 9066. As part of this commemoration, Eiko Yamaichi, as well as other former incarcerees will give their remembrances of their incarceration.

In 1988, the United States gave an official apology to former incarcerees of the camps with the passage of the Civil Liberties Act of 1988. It is important to note that there were many people who were also incarcerated in the same camps as Japanese Americans but were not offered the same acknowledgement. Grace Shimizu of the Campaign for Justice Redress Now for Japanese Latin Americans will speak about the continued fight for truth, acknowledgement, and justice. Read more about the plight of Japanese Latin Americans and the campaign for justice...
END_OF_DOCUMENT_TOKEN_TO_BE_REPLACED
Added to the calendar on Sun, Jan 16, 2022 11:40AM
Related Categories: South Bay | Racial Justice
Add Your Comments
Support Independent Media
We are 100% volunteer and depend on your participation to sustain our efforts!