Freedom! The Story of the Black Panther Party w/ MoAD 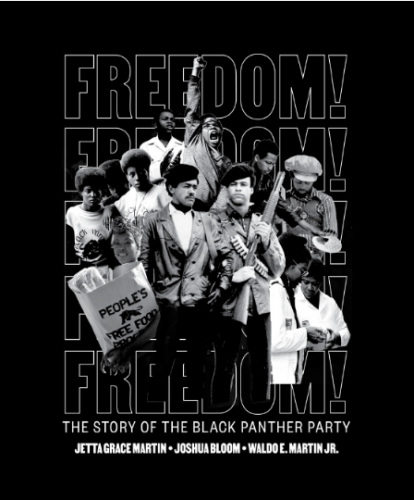 This is the story of Huey and Bobby. Eldridge and Kathleen. Elaine and Fred and Ericka. The committed party members. Their supporters and allies. The Free Breakfast Program and the Ten Point Program. It’s about Black nationalism, Black radicalism, about Black people in America.

This program is part of MoAD’s celebration of the National Day of Service honoring the Reverend Dr. Martin Luther King, Jr. Register for the day’s programming here.

Jetta Grace Martin is a debut author from the San Francisco Bay Area. She earned her A.B. in Social Studies and African American Studies from Harvard University. Jetta is also a dancer, performer and choreographer who has performed nationally and internationally, and whose choreography has been presented by the Museum of the African Diaspora and the Black Choreographer’s Festival. Jetta is the recipient of the Cornel West Prize and the Kathryn Ann Huggins Prize, for her research on race, embodiment, and Katherine Dunham.

Waldo E. Martin Jr. is the Alexander F. and May T. Morrison Professor of American History and Citizenship at the University of California, Berkeley. He is the author of No Coward Soldiers: Black Cultural Politics in Postwar America (2005), as well as other books, and the co-author of Black Against Empire: The History and Politics of the Black Panther Party, which won the American Book Award. Aspects of the modern African American freedom struggle and the history of modern social movements unite his current research and writing interests.

Ula Taylor earned her doctorate in American History from UC Santa Barbara. She is the author of The Promise of Patriarchy: Women and the Nation of Islam, The Veiled Garvey: The Life and Times of Amy Jacques Garvey, co-author of Panther: A Pictorial History of the Black Panther Party and The Story Behind the Film and co-editor of Black California Dreamin: The Crisis of California African American Communities. Her articles on African American Women’s History and feminist theory have appeared in the Journal of African American History, Journal of Women’s History, Feminist Studies, SOULS, and other academic journals and edited volumes. In 2013 she received the Distinguished Professor Teaching Award for the University of California, Berkeley. Only 5% of the academic senate faculty receive this honor and she is the second African American woman in the history of the University to receive this award.

Added to the calendar on Thu, Jan 13, 2022 8:21PM
Add Your Comments
Support Independent Media
We are 100% volunteer and depend on your participation to sustain our efforts!