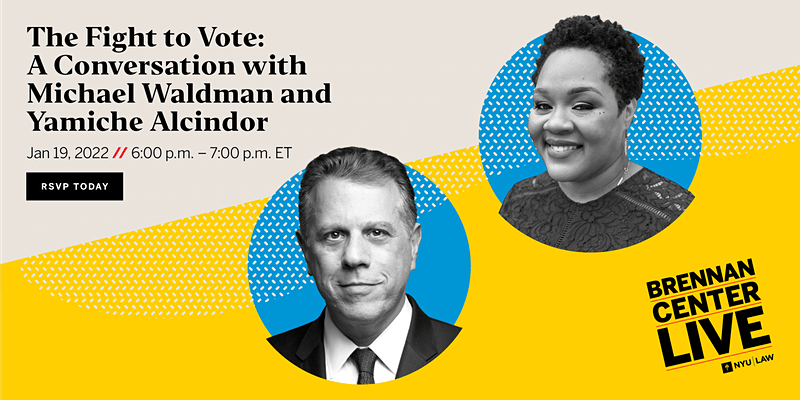 ACCESSIBILITY: The Brennan Center for Justice at NYU School of Law provides reasonable accommodations to people with disabilities. Requests for accommodations for events and services should be submitted at least two weeks if possible before the date of the accommodation need. Please email adrienne.yee [at] nyu.edu or call 646-925-8728 for assistance.


THE FIGHT TO VOTE

At a moment of intense new interest in the fight over voting rights, a new edition of the acclaimed work of history, "The Fight to Vote", provides an invaluable look at the history that has led to today’s great clash over American democracy.

Donald Trump’s Big Lie isn’t just about what the defeated president felt or did — but rather the impact of his actions on American democracy and millions of voters.

In conversation with acclaimed political journalist Yamiche Alcindor (NBC News Washington Correspondent), Brennan Center President, Michael Waldman, tracks the current wave of voting restrictions sweeping statehouses around the country in the context of the nation’s history of voting rights — from the Founders’ debates, to the civil rights era.

“Some eras are quiet,” Waldman writes now. “In others, great forces clash, bringing about breakthroughs in participation—or a lurch backward. That’s where we are today: one of the most intense moments in our history in the fight for a meaningful right to vote.”

Waldman shows that the fight over the vote has always been a central political issue, delivering a message that the late Rep. John Lewis called “a message every American needs to hear.” Trump’s bid to overturn the election marked a break with that history.

It’s an epic clash — with states rushing to restrict the vote, while Congress has the power to stop them. The question is whether it has the political will.


Added to the calendar on Wed, Jan 12, 2022 2:18PM
Add Your Comments
Support Independent Media
We are 100% volunteer and depend on your participation to sustain our efforts!