Add an Event
Newswire
Calendar
Features
Home
Donate
From the Open-Publishing Calendar
From the Open-Publishing Newswire
Indybay Feature
Related Categories: U.S. | Government & Elections
The Most Frightening Aspect of the January 6 Insurrection
by Steven Roberts
Monday Jan 10th, 2022 5:27 AM
A recent opinion piece in the Wall Street Journal argues that the tragic event of January 6, 2021 does not rise to the definition of an insurrection, but was merely a riot. Other commentators say it was indeed an insurrection, one that arose from a coup...an event that was only the tip of a huge and frightening iceberg. 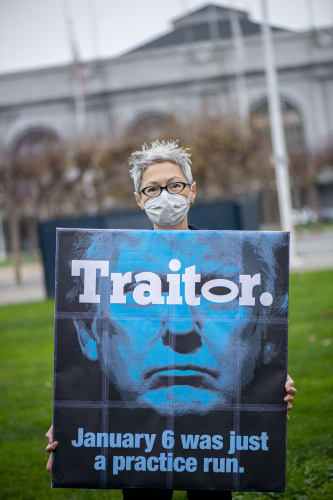 Sidney Blumenthal, in an opinion piece in The Guardian on January 6 this year, explains that the insurrection emerged from a coup. He states that "It has been a common conceptual error to consider the insurrection alone to be the coup. The coup, however, was an elaborate plot developed over months to claim that the votes in the key swing states were fraudulent.”

While most readers will recognize the name Koch brothers, and some will have heard of the American Legislative Exchange Council (Alec), some other names and their involvement will be new. Ginni Thomas is a right wing zealot whose name does not come to mind as quickly as that of Marjorie Taylor Greene when picturing an extremist Republican. Thomas happens to be the wife of uber conservative Supreme Court Justice Clarence Thomas. She is, not surprisingly, buddy buddy with Leonard Leo, vice-president of the arch conservative Federalist Society and the Judicial Crisis Network. They both have strong motivation to pack the federal courts and deny Democratic appointments to the bench.

Furthermore, both Thomas and Leo are members of the secretive Council on National Policy (CNP), an organization composed of more than 400 rightwing Republican leaders. The CNP has been described as a nexus of “the manpower and media of the Christian right with the finances of western plutocrats and the strategy of rightwing Republican political operatives”.

The 2021 coup involved Republican operatives, major Republican donors, organizations and members of the Congress. According to Blumenthal, “the coup was hardly Trump’s full-blown brainchild. It was packaged for him. It was adapted, enhanced and intensified from longstanding Republican strategies for voter suppression.”

Last week on the anniversary of the failed coup, demonstrators throughout the nation seemed keenly focussed on Trump. They carried signs reading "Trump Traitor" and "Trump Lies." Other Americans stayed home, flipped through TV channels and perhaps landed on a show like "Entertainment Tonight," that has regularly covered the lives of some of the Capitol terrorists.

Television viewers are captivated by colorful characters like Gina Bisignano, the makeup smeared Beverly Hills salon owner who cried out “they can’t take our Trumpy Bear” as she broke windows to gain entry to the Capitol, and the QAnon shaman who stood bare-chested on the Senate floor, clad in furs and Viking horns, holding a spear, But if we focus our anger only at the QAnon and Trump-worship driven insurrectionists at the Capitol building, “it would be as if only the Watergate burglars were prosecuted and that was the end of the affair,” Blumenthal writes.

There are many many people in power who must be held accountable...and they must be stopped.


https://www.theguardian.com/commentisfree/...
Add Your Comments
Support Independent Media
We are 100% volunteer and depend on your participation to sustain our efforts!