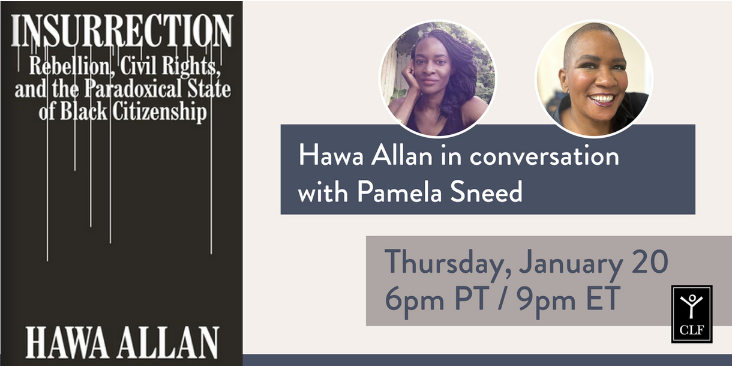 The little-known and under-studied 1807 Insurrection Act was passed to give the president the ability to deploy federal military forces to fend off lawlessness and rebellion, but it soon became much more than the sum of its parts. Its power is integrally linked to the perceived threat of black American equity in what lawyer and critic Hawa Allan demonstrates is a dangerous paradox. While the Act was initially used to repress rebellion against slavery, during Reconstruction it was invoked by President Grant to quell white-supremacist uprisings in the South.

During the civil rights movement, it enabled the protection of black students who attended previously segregated educational institutions. Most recently, the Insurrection Act has been the vehicle for presidents to call upon federal troops to suppress so-called “race riots” like those in Los Angeles in 1992, and for them to threaten to do so in other cases of racial justice activism. Yet when the US Capitol was stormed in January 2021, the impulse to restore law and order and counter insurrectionary threats to the republic lay dormant.

Allan’s distinctly literary voice underscores her paradigm-shifting reflections on the presence of fear and silence in history and their shadowy impact on the law. Throughout, she draws revealing insight from her own experiences as one of the only black girls in her leafy Long Island suburb, as a black lawyer at a predominantly white firm during a visit from presidential candidate Barack Obama, and as a thinker about the use and misuse of appeals to law and order.

Elegant and profound, deeply researched and intensely felt, Insurrection is necessary reading in our reckoning with structural racism, government power, and protest in the United States.

“Hawa Allan speaks with the cool, clear, analytical rigor of the highly trained legal scholar, the detached bemusement of the social anthropologist who declines to go native, the eloquence of the poet, and the sublimated autobiographical anger of the unwilling recipient of this country’s doggedly persistent attempts to deny the rights of full and equal citizenship to Americans of acknowledged African descent. Her prose is mesmerizing; her voice is fresh, original, and completely unique. ?Insurrection ?is a profound historical meditation on the American pathology, the brilliant debut of a major thinker on the American intellectual scene.”
-Adrian Piper, author of Escape to Berlin

“‘All of history is happening right now,’ observes Hawa Allan in this beautifully written history of the complex, paradoxical role of the Insurrection Act in American life. ?Allan’s profoundly moving book exposes the emotional underbelly of slavery’s traumatic legacy on both enslavers and enslaved, and on all the generations since. The affective echo of that moral crisis remains entangled in today’s most urgent conflagrations. In a moment as deeply divided as ours, Allan’s book offers principled and reflective pause.”
-Patricia J. Williams author of Giving a Damn

Hawa Allan is an attorney and an author who writes cultural criticism, fiction and poetry. She is a lecturer at The New School and an essay editor at The Offing. Her work has appeared, among other places, in The Baffler, the Chicago Tribune, LA Review of Books, Lapham’s Quarterly and Tricycle magazine, where she is a contributing editor.

Pamela Sneed is a poet, educator, and performer. She is the author of the books Funeral Diva, Sweet Dreams, Kong, and Imagine Being More Afraid of Freedom than Slavery. She was a Visiting Critic at Yale, and at Columbia University’s School of the Arts, and is online faculty at Chicago’s School of the Art Institute teaching Human Rights and Writing Art. She also teaches new genres at Columbia’s School of the Arts in the Visual Dept. Her work is widely anthologized and appears in Nikki Giovanni’s, The 100 Best African American Poems. She makes her home in Brooklyn, New York.
Added to the calendar on Fri, Jan 7, 2022 8:38AM
Add Your Comments
Support Independent Media
We are 100% volunteer and depend on your participation to sustain our efforts!