Press Conference: Stop the Mayor's War on the Tenderloin! 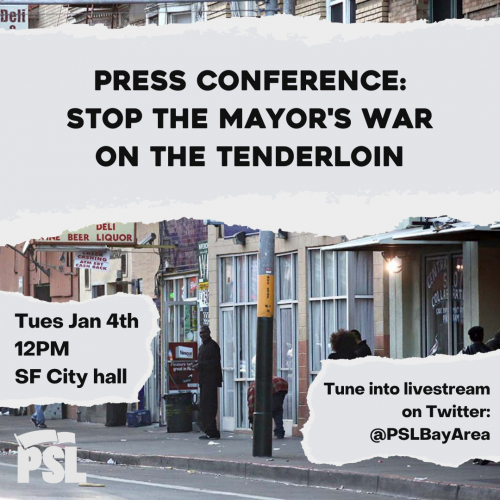 Import event into your personal calendar
Date:
Tuesday, January 04, 2022
Time:
12:00 PM - 1:00 PM
Event Type:
Press Conference
Organizer/Author:
Party for Socialism & Liberation
Location Details:
SF City Hall. Tune into the livestream via @PSLBayArea on Twitter
On Dec 23rd, the Board of Supervisors ratified London Breed’s State of Emergency declaration, which gives her sweeping power to launch a vicious police crackdown in the Tenderloin. The Board, however, has the power to revoke this measure.

We're a group of residents, workers and organizers in the Tenderloin neighborhood of San Francisco and members of the Party for Socialism and Liberation, concerned by the Board’s greenlighting of a police crackdown in our community. We are holding this press conference with several organizations in the community to demand the Board of Supervisors revoke Breed's emergency ordinance!

The Tenderloin Emergency Intervention Plan tries to solve the problems in our neighborhood with brute force and police repression, while claiming to be in residents’ interests. But real, permanent solutions require systemic change against this stark inequality in the first place.

San Francisco needs a progressive program that addresses the systemic causes of poverty and crime:

Sign the petition!
Added to the calendar on Mon, Jan 3, 2022 4:38PM
Add Your Comments
Support Independent Media
We are 100% volunteer and depend on your participation to sustain our efforts!