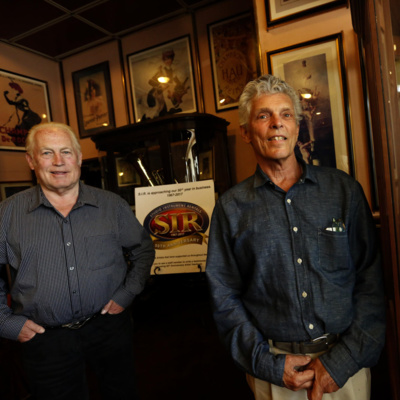 Studio Instrument Rentals (S.I.R.) has been around since 1967, is co-founded by Ken Berry and Dolph Rempp, and has served the music industry and many of their clients by offering tour support, rehearsal studios, and instrument rentals to many famous musicians that have been accepted into the rock and roll hall of fame.

Among the many famous clients at S.I.R., they include the Beach Boys, Eric Clapton a supporter of Amnesty International, BB King, James Brown, Chuck Berry, John Fogerty, Gil Scott Heron a revolutionary poet and musician, Van Morrison, Willie Nelson a supporter of Farm Aid and Feeding America, and many other musicians who are not known to be Trump supporters. They may not want their money used by others including Dolph Rempp of S.I.R. to support the fascist Trump regime, but that does not seem to matter to Dolph Rempp.

The same twice impeached ex-president who tried to steal the last election with his mob of fascists who stormed the Capitol building on January 6, 2021, when Trump urged his supporters to march to the Capitol, which hundreds then attacked, resulting in multiple deaths and interrupting the electoral vote count.

That’s right. Dolph Rempp the co-founder of S.I.R. supported Trump even as Trump was being supported by the extreme right-wing fascists, the KKK, neo-Nazis, and white supremacists. Meanwhile, many of the liberal left-wing musician clients of S.I.R. would have nothing to do with supporting the fascist Trump regime, and were in opposition to Trump’s fascist beliefs.

With Dolph Rempp supporting Trump, is this something that the many clients of S.I.R. would want to see their money used for, or would they want to give their business to S.I.R. if they knew that Dolph Rempp, the co-founder of S.I.R. is a Trump supporter?

What would the employees of S.I.R. think of Dolph Rempp if they knew he is a Trump supporter?

Years ago Dolph Rempp used to be seen often heading off from S.I.R. on Sunset BLVD in Hollywood, cruising in a vintage white Duesenberg to go play Polo in the afternoons as the many famous rock bands were making him rich while rehearsing their music in the studios of S.I.R. before they would go on tour across the nation, or go to some recording sessions in some nearby recording studios.

There used to be a lot of alleged rumors flying around about how S.I.R. really got it’s start in the music business years ago. Back in the early 80’s Pak Lew of Guitar Villa on Santa Monica BLVD in Hollywood, and some local musicians from nearby Gold Star Recording Studios, and Clover Studios, used to claim that the folks at S.I.R., got their start by stealing a lot of musical instruments from various concerts they would go to, and take them back to S.I.R. to rent out to the many famous clients they had. They also claimed that Frank Zappa, was mad at S.I.R., because S.I.R. rented out some of his musical instruments without his permission that he was paying to have S.I.R. keep in storage for him. These were just a few of the rumors going around back in the early 80’s about S.I.R. when I worked in Hollywood years ago in the music industry, and I do not know if they were true.

According to the history of S.I.R., they claim that founders Ken Berry and Dolph Rempp of S.I.R. got their start by renting out a bass guitar to Mitch Rider and the Detroit Wheels, but it does not mention how they got the bass guitar that they rented out.