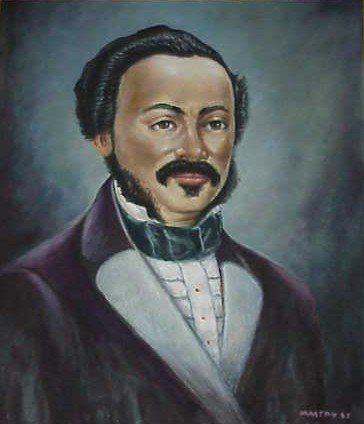 Have you heard of the "African Founding Father of California?"

Today, our California Black Agriculture Working Group, seeks to preserve the legacy of the entitled lands and restore the authentic footprint of the 1849 gold mining town of Negro Bar, California?"

In 1844, the vast Leidesdorff Ranch was entitled to Honorable William Alexander Leidesdorff, Jr. 100+ years later the City of Folsom was incorporated, in 1946.

Hidden in plain sight is the authentic footprint of town Negro Bar when Leidesdorff Plaza was dedicated in 1966.

Historic Leidesdorff Plaza had a huge natural spring water fountain that anchored a most historic Plaza in the Western United States of America, eastern terminating point of the first Railroad with Passenger lines in the west and much more.

A world class lasting tribute to William Alexander Leidesdorff, Jr. will become manifest; as the old Leidesdorff Plaza was demolished long ago to make way for a Federal Transportation Project, part of the Gold Line along the Regional Transit Light Rail.

Leidesdorff Plaza was named in memory of William Alexander Leidesdorff, Jr., a prominent civic leader and transportation pioneer in the successful quest for California to become the 31st state in the United States. He was the first elected Treasurer of the City of San Francisco, owned the largest home in the city, constructed the first City Hotel, built the first commercial shipping warehouse, and donated the land to build the first public school in California and much, much more.

Born in St. Croix, Virgin Islands in 1810 to Anna Marie Sparks, an African woman, and William Leidesdorff, Sr., a citizen of Denmark they met in New Orleans, Louisiana relocated and live together as man and wife their entire adult lives.

In 1834, Leidesdorff, eldest first born son, was naturalized a U.S. Citizen in New Orleans, Louisiana and forced to leave his lucrative maritime shipping business because of Negro Seamen Acts, in second busiest port in the United States, according to primary source documents.

In 1840, Leidesdorff traveled to Washington D.C. and New York, NY before making final trips into the Gulf of Mexico, Cuba, Honduras, Virgin Islands, Brazil, Argentenia, Chile and relocates to the Pacific Rim.

In 1843, he was naturalized as a Mexican citizen in order to facilitate acquiring a vast land grant from the Mexican authorities in the Sacramento Valley and was an early advocate of creating dual United States citizenship.

In 1845, he accepted the position of United States Vice-Consul to the Mexican Alta California region; as such, he was the first African-American diplomat in history and is affectionately known as the "African Founding Father of California."

In 1848, prior to his untimely death from "brain fever", he received official notification of vast quantities of gold on his immense cattle and wheat ranch along today's HWY 50 Heritage Corridor. He is buried just inside the entrance of the Roman Catholic Church, Old San Francisco Mission Delores and honored at One Leidesdorff Street, in the old HIstoric Streets of Old San Francisco, cobblestone from old Historic Leidesdorff Ranch.

The Leidesdorff Memorial Highway was named by our California State Legislature, by Assembly Concurrent Resolution 131, Chapter 41, May 3, 2004.

By May 2022, Leidesdorff Legislation to facilitate long delayed plans, ready and forward, as we #BuildBackBetter.
Add Your Comments
Support Independent Media
We are 100% volunteer and depend on your participation to sustain our efforts!