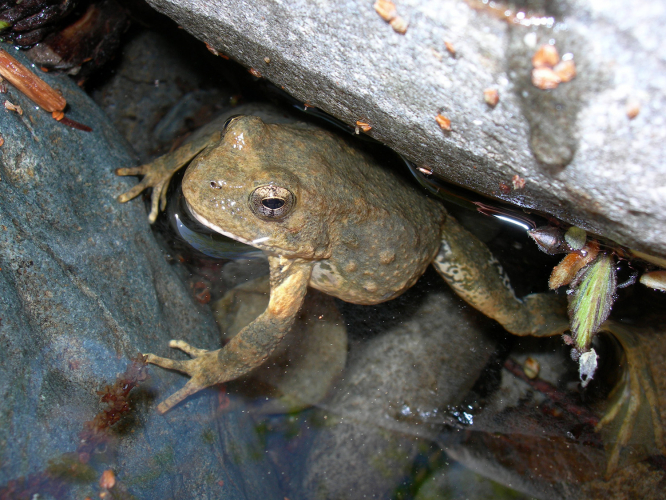 original image (1500x1125)
“At last these little lemon-legged frogs, who are such an integral part of our natural stream ecosystems, have gotten the protection they need to survive,” said Jeff Miller, a senior conservation advocate at the Center. “Protecting these precious creatures will also help safeguard the coastal and Sierra foothill rivers and creeks we all rely on for clean drinking water and recreation.”

Foothill yellow-legged frogs were once found in many streams and rivers along the lower western slopes of the Sierra Nevada as well as in Pacific Coast drainages from the Oregon border to at least as far south as Los Angeles County. The species has now disappeared from more than half of its former California range.

These frogs are threatened by a wide range of activities and processes that damage their habitat, including dams and water diversions that alter stream hydrology, high-severity wildfires, flooding, logging, mining, livestock grazing, urban development and marijuana cultivation. They are also harmed by invasive species, climate change, disease and pesticide use.

The Service proposed rules to prohibit “take” or harm of the frogs through collecting, habitat destruction, harmful water diversions or stream channel modifications, livestock grazing that damages riparian habitat, introduction of invasive bullfrogs or fish into yellow-legged frog habitat, and pesticide applications that violate label restrictions. Exemptions from take prohibitions are proposed for wildfire prevention, logging under established forest or fuels management plans that include measures to minimize impacts to frogs and their habitat, stream habitat restoration, removal of illegal cannabis cultivation sites, removal of invasive species, and State of California activities and projects designed to conserve foothill yellow-legged frogs.

Adult foothill yellow-legged frogs (Rana boylii) are from 1.5 to 3 inches long, with a distinctive lemon-yellow color under their legs. They inhabit partially shaded, rocky streams that flow year-round, and their life cycle is synchronized with the seasonal timing of streamflow conditions. These frogs need perennial water where they can forage through the summer and fall months.

The Central Coast population lives in streams in the East Bay and south of San Francisco Bay in the Coast Ranges to San Benito and Monterey counties. Significant foothill yellow-legged frog populations remain in the Diablo Range. The South Coast population is west of the Salinas Valley in Monterey County and south into the southern Coast Ranges. These frogs have now disappeared from all coastal streams south of San Luis Obispo County.

The Center petitioned in 2012 to protect the foothill yellow-legged frog under the federal Endangered Species Act and in 2016 for protection under the California Endangered Species Act. The California Fish and Game Commission in 2019 listed the Southern Sierra, Central Coast and South Coast populations as endangered, and the Northern Sierra and Feather River populations as threatened. Both federal and state wildlife authorities have determined that foothill yellow-legged frogs in California’s North Coast and Oregon do not currently warrant protection.